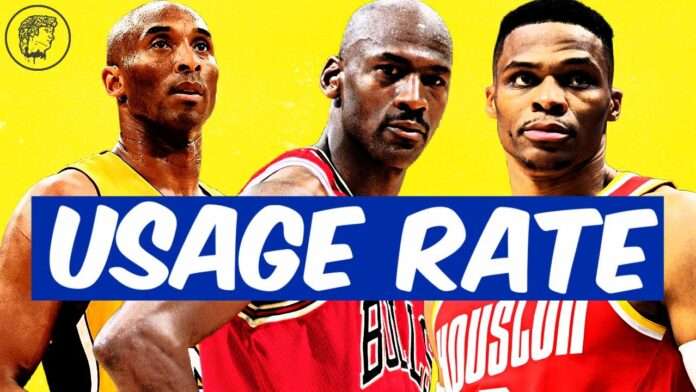 NBA usage rate, the truth vs buffoonery is about the NBA advanced metric usage rate (USG%) and the proper understanding what it consists of.

There is a lot of misinformation about every aspect of NBA basketball and basketball in general. From evaluating talent, the comparisons of different eras of talent to what the stats people are citing even really mean.

I’ve seen, while ignoring people NBA using usage rate (advanced NBA metric) as reasoning to some argument or take that they are making to why some NBA player is better than another many times.

I’m not going to burst asunder their very ideas and beliefs in an attempt to correct them. For if only my reasoning being I wouldn’t want these imbeciles spewing their false rhetoric anywhere in my direction.

There is no respect available to people that want to spread lies and garbage, especially when it’s not propaganda but instead caused by a failed knowing of available information.

I say I never had the misadventure of arguing with one of these people trying to use NBA usage rate as their sole reasoning behind their buffoonery, that was until this past weekend.

“The Simplicity” is the name I’ve given to these type of fans. The ones who don’t know what they don’t know, YA KNOW.

I’m a Sixers fan and with James Harden, even if he was in his prime, (he’s not) you can’t win an NBA championship with him. The two top aspects to winning rings are defense and ball protection, without them how many points you score is irrelevant.

If you disagree, you’re just wrong, it’s OK. I’ve been wrong about multiple issues in the past. What I’ve also done is study every player, from every team, from every season with film on them(full games) on repeat.

These are the top five most turnovers in a season by an NBA player. This matters, it’s not misleading in any way. Unlike the top turnovers for an NBA career list could be.

Example, John Stockton has 4,244 career turnovers, this is misleading. He only turned the ball over 2.8 times per game and had an assist-to-turnover ratio for his career of 3.7.

This is a legendary ratio, only Chris Paul is better at 3.96. Meaning if anyone had Stockton’s assist totals, they would have committed so many more turnovers for there career.

As a statistical comparison, James Harden has an assist-to-turnover ratio for his career of 1.80. He should never be allowed to dribble or pass the ball with at number. The below stat confirms this. NBA games aren’t longer now, many great players have been franchise point guards, except no one else has ever done this.

This person who believed he belonged in a conversation about basketball with me, (I told him repeatedly, he didn’t) let me know the reason why James Harden had so many turnovers was because he had the NBA’s 2nd highest usage rate of all-time in a single season.

Russell Westbrook earned himself the top rated NBA usage rate for a season too. He was now convinced who really knew more about NBA basketball.

He held all the expertise and I was learning from him. Or was I? All these fantastic ideas that he possessed, what did they consist of?

In Understanding Stupidity, James F. Welles defines stupidity this way: ÃƒÂ¢Ã¢â€šÂ¬Ã…â€œThe term may be used to designate a mentality which is considered to be informed, deliberate and maladaptive.ÃƒÂ¢Ã¢â€šÂ¬Ã‚Â

Welles distinguishes stupidity from ignorance; one must know they are acting in their own worst interest.

As can be shown above, I quite arrogantly (I treat people how they deserve to be treated) let this imbecile know that what NBA usage rate is, what the meaning is.

Usage Rate is the percentage of a teams possessions ended with you. It takes into account field goal attempts, (make or miss) getting fouled and going to the line and TURNOVERS.

I let my buddy know that NO, NBA usage ratings aren’t an excuse for turnovers, they are LITERALLY a part of the NBA usage rate formula.

Russell Westbrook and James Harden have such a high usage rate because THEY TURN THE BALL OVER LIKE THEY DO.

They create more turnovers than a person who’s spent his entire life working in a pizza joint or anyone who’s ever played in the NBA (season). They alone make up the top five spots in Turnovers for a season.

I’m rather ignorant at this point which isn’t a good look but when someone tells you that its you who lack expertise, simply because they have none, it’s frustrating.

The reason for usage rate misinterpretation

You can’t really blame the total misconception of usage rate because it’s really the analysts on television that use this for examples to confirm or deny their position on different takes.

This is the blind leading the blind. These analysts don’t really know what NBA usage rate is either.

I’ve written some articles about the NBA’s salary cap and team payrolls. By having a good understanding of the NBA CBA, I’m able to watch in dismay and witness see some of these same television personalities, talking about or reporting on things within the NBA salary cap that aren’t even possible.

The same things happen in articles. I’ve been researching different articles of my own and read things that are ridiculous and wonder how could ESPN just release this fictitious garbage.

I’m talking about potential trades and free-agent signings. The Philadelphia 76ers are hard-capped for the 2022-23 season but someone read in an article that they could still sign as many players to minimum contracts as they wanted to, no matter where the team was financially in regards to the tax apron.

He let me know he read this in an article written by a major sports publication and obviously they knew more than me because of this fact.

People who make assumptions deserve no respect. This guy was doing the same thing the writer was doing.

SO I SHOWED HIM THIS:

So long as a team is not hard-capped and has an open roster spot, there is no limit to the number of minimum-salaried players that team can sign.

He told that this was my opinion and I said “No, it wasn’t, this is from the NBA’s collective bargaining agreement.

why did this happen?

Why is the usage rate of NBA players not understood for what it actually is? Basketball Reference and ESPN use this advanced metric in their statistics for players.

I got the exact formula from them and this is how they explain it,

Anyone who finds this confusing, Basketball Reference gives a lamen explanation for usage ratings.

I think the issue is that they put this percentage into the statistics themselves, giving usage rate more credence placed on it than it should.

This isn’t baseball all advanced metrics aren’t good, precise, or sensible to use. By placing this metric in front of not NBA experts but stat lovers, it makes the importance of this outrageous.

This isn’t an excuse for anyone misusing NBA usage rate to not make sure that they know what it is before spewing among the masses but its still the likely reason that they do it.