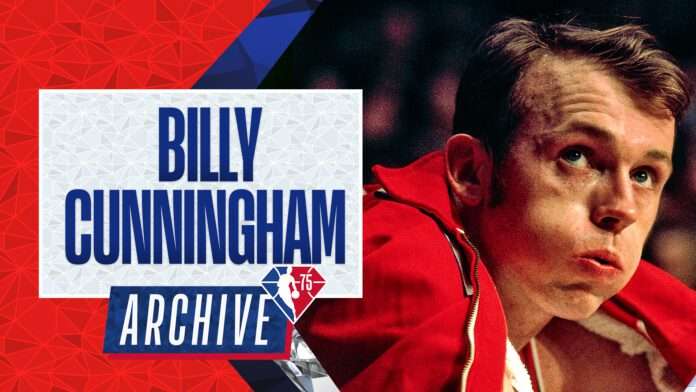 Billy Cunningham, the Kangaroo that hopped through & got two rings. The Sixers had never won an NBA championship since they relocated to Philadelphia from Syracuse.

William John “Billy” Cunningham was a 6’6, 210 pound Power Forward/Small Forward that was nicknamed “the Kangaroo Kid” because of his leaping and record-setting rebounding abilities.

Billy Cunningham was from Brooklyn and went to school in North Carolina. He wasn’t a “Philly Guy” but that would quickly change as soon as soon as he arrived in the city.

Billy Cunningham Autographed Philadelphia 76ers Red Jersey (JSA) Buy Now
We earn a commission if you make a purchase, at no additional cost to you.

Billy Cunningham would be the last recruit of Frank McGuire at the University of North Carolina at Chapel Hill.

“The Kangaroo Kid” would never play for the 1957 NCAA championship winning coach though, he would play for another coach during his time in Chapel Hill.

McGuire left to take the Philadelphia Warriors head coaching job in the NBA.

Billy Cunningham was the first superstar player that Dean Smith coached at the University of North Carolina.

Billy C was a game changer but the team overall during these years wasn’t that good. Frank McGuire had left the Tar Heels with a one-year probation for recruiting violations.

Pretty much entertaining players away from campus. The same reason the Heels were undefeated in 1957 led to this situation, bringing that New York City talent to Chapel Hill.

The NCAA Council charged that in at least 15 instances, UNC entertained prospective players, their parents and sometimes their high school coaches away from the Chapel Hill campus. The council reported that the university paid for lodging and food for players’ parents who attended the annual Dixie Classic in Raleigh. It was ruled that McGuire and Harry Gotkin, his New York City “talent scout,’ picked up entertainment bills and provided no detailed account of the expenditures.

North Carolina never finished a season ranked during Cunningham’s playing days. They never even finished higher than third in the ACC standings. North Carolina Tar Heels WinCraft Bucket III Cooler Cart Golf Bag
$289.99
Buy Now
We earn a commission if you make a purchase, at no additional cost to you.

After the one-year probation, North Carolina had to deal with the 1961 college basketball point shaving scandal that caused the University to shorten Dean Smith’s first season as the Tar Heels head coach.

This was a major gambling scandal. It involved the arrests of 37 students from 22 different universities.

The scandal was orchestrated by Jack Molinas, already a known gambling associate from the CCNY point shaving scandal in 1951. His partners were bookmaker Joe Hacken and Genovese crime family enforcer Vincent “the Chin” Gigante.

The same mobster that is portrayed by Vincent D’Onofrio on the critically acclaimed Epix drama, ‘Godfather Of Harlem.

Molinas played basketball for Columbia University and was drafted third overall by the Fort Wayne Pistons in the 1953 NBA Draft. He played 32 games in the NBA before he was banned for betting on Pistons games.

His basketball skills got him selected to the 1954 NBA All-Star Game but was ultimately replaced because of his suspension (ban).

Molinas was convicted and sentenced to 10-15 years in prison for his role in this point shaving scandal. While serving his time, mostly in Attica, Molinas was the inspiration for the Burt Reynolds film, “The Longest Yard”.

On August 3, 1975 at age 43, Molinas was killed while standing in the backyard of his home in Los Angeles.

Some of the big named players involved in the scandal were North Carolina’s two-time All-American Doug Moe, Roger Brown of the University of Dayton, Tony Jackson of St. Johns and Connie Hawkins of Iowa.

At the time these players and others were banned for life from any association with college basketball or the NBA.

Chin: The Life and Crimes of Mafia Boss Vincent Gigante
$15.95
Buy Now
We earn a commission if you make a purchase, at no additional cost to you.

I didn’t lose focus and forget that this article is about “the Kangaroo Kid”. I wanted to set the time, place and situation for when a group of Carolina students hung Dean Smith in effigy.

It was Smith’s fourth season but he hadn’t really been able to get his bearings with the distractions of the scandal, coupled with the NCAA disciplining the Heels and placing them on probation for recruiting violations.

Some “not so knowledgeable fans” thought during Billy’s senior season that UNC should have been better than they were. They were on a four game losing streak and Carolina was 6-6 on the season. These fanatics thought what they did was a good way to vent their frustrations.

Upon the teams bus returning to Woollen Gym, The Heels had just been pummeled by Wake Forest, Coach Smith told his players to stay on the bus and he would handle the situation.

But before he could, Billy Cunningham stormed off the bus, marched over to the tree, and ripped the dummy down.

Three days later, UNC traveled to Cameron Indoor Stadium, where they were supposed to lie down for the 6th ranked Duke Blue Devils.

Duke was in the middle of four straight ACC titles and three Final Four appearances.

After returning to Chapel Hill after the victory in Durham, the same fans were screaming “We Want Smith”. Billy Cunningham scored 48 points in a game against Tulane on December 10, 1964. This was a North Carolina record at the time and is currently second all-time in program history only to his 1964-65 UNC teammate Bob Lewis’ 49 points the following season.

“Kang” set the Tar Heels rebounding record for a single game too. On February 16, 1963 vs. Clemson, Billy pulled down 27 boards. He topped this the following season by registering 28 rebounds in a game.

Cunningham is fourth with 1,062 rebounds at Chapel Hill. He has the most rebounds of any UNC player that didn’t play four seasons with the Tar Heels (Freshman not eligible).

Billy had 60 double-doubles in 69 games played at North Carolina, including a school record 40 consecutive games with a double-double. The Philadelphia 76ers drafted “the Kangaroo Kid” Billy Cunningham with the 7th overall pick in the 1965 NBA Draft.

This might be the best selection in Sixers draft history when you weigh what he accomplished for the franchise and the fanbase.

The NBA Sixth Man of the Year award wasn’t created until the 1982-83 season. If it had existed in “Kang’s” rookie season, he likely would have won the award.

The Sixers were 40-40 in 1964-65. With Cunningham playing the role of superstar sixth man, the 76ers upped their record to 55-25 in his rookie season. This was good for first place in the Eastern Division (conference).

Cunningham averaged 14.3 points-per-game and 7.5 rebounds in 26.7 minutes-per-game for Philadelphia as a rookie.

This got him selected to the All-Rookie First Team but the Sixers lost again to the Celtics in the playoffs.

IN his second NBA season, “the Kangaroo Kid” was even better and it reflected in the teams play and number of wins they had.

The win total is still tied for fifth best all-time. This is the only team that played less than 82 games ranked in the top five for wins in a season all-time. Every other team in the top five of this category played 82 games.

Cunningham was the Sixers super sixth man as he averaged 18.5 points-per-game and 7.3 rebounds in only 26.8 minutes-per-game en route to the 1967 NBA championship. The 1967 NBA champion Sixers finished first in the East for the third straight season in 1967-68 with a record of 62-20. Every season Billy came off the Sixers bench, Philly had the best record in the East.

Individually, Billy mirrored his championship season statistics but the Sixers lost by four points in game seven of the East Finals to Boston. The 76ers were up 3-games-to-1 too.

The Sixers 24-year-old sixth man broke his non-shooting wrist in the opening round of the playoffs against the New York Knicks.

Billy Cunningham became a starter and the franchise superstar of the Philadelphia 76ers after Wilt left in 1968.

Over the next four years, Cunningham would be an All-Star each season. He’d be a All-NBA First Team selection three years in a row (1969-71) and a 2nd team selection (1972) in the other. “the Kangaroo Kid” got offered more. money by the Carolina Cougars of the ABA and he left the NBA to be more comfortable.

He was awarded the ABA MVP in his first season in the upstart league. Averaging 24.1 points-per-game, 12.0 rebounds, 6.3 assists-per-game, 2.6 stl. He played in his fifth consecutive All-Star Game too.

After two seasons in the ABA, Billy came home to the Sixers but he tore up his knee in his second season back in Philadelphia and “Billy C” retired.

The 1983 Sixers stormed through the playoffs with a 12-1 record.

Cunningham retired for good after the 1985 season. When he retired from coaching he had the best winning percentage in NBA history.

Only Phil Jackson has a better winning percentage than “the Kangaroo Kid” as a head coach all-time, after all these years. No other coach reached 200, 300, or 400 coaching wins faster than Billy Cunningham did, TO THIS DAY. How Many Rings You Got?

Anyone else ever associated with the Sixers franchise: LESS THAN TWO

Billy Cunningham has more Sixers NBA championship rings than any other person, player, coach or owner in franchise history.

Since the Sixers moved to Philadelphia, no team has won an NBA championship without Billy Cunningham playing a vital role in its ultimate success.

So the next time any of you find yourselves talking about who the greatest Sixers of All-Time are, Just keep this in mind. Lou Williams Philadelphia 76ers Mitchell & Ness 2005-06 Hardwood Classics Swingman Jersey - Black
$129.99
Buy Now
We earn a commission if you make a purchase, at no additional cost to you.