History of the Stanley Cup

It’s the oldest trophy awarded to any league’s champions in North America. Making its first appearance in 1892 as the Dominion Hockey Challenge Cup.

The Stanley cup is named after Lord Preston of Stanley, the Governor General of Canada. Lord Preston donated it to be awarded to Canada’s top amateur ice hockey team.

Professional hockey teams could first compete for Lord Stanley’s cup in 1906. The National Hockey Association (NHA) and the Pacific Coast Hockey Association (PCHA), the two top hockey leagues at the time, reached an agreement that each league’s champion would face each other for the trophy.

Similar to the first Super Bowl’s pitting the NFL vs. the AFL champions. The Stanley Cup became the de facto (a state of affairs that is true in fact, but that is not officially sanctioned) trophy for the NHL champion in 1926.

In 1947, it became the de jure (a state of affairs that is in accordance with law (i.e. that is officially sanctioned) championship trophy of the NHL.

Unlike other championship trophies, a new Stanley Cup isn’t made each year. Teams used to keep the trophy until a new champion was crowned. The team then displays a Stanley Cup replica in any personal or organizational trophy cases.

Today the Cup winners only keep the NHL championship trophy throughout the summer and a limited number of days during the following season. With the cup returned to the league offices.

The current version of the NHL trophy was made in 1958. The modern one-piece Cup was designed with a five-band barrel which could contain 13 winning teams per band.

Since 1924, a select portion of the winning players, coaches, management, and club staff names are engraved on the cup’s bands.

Every 13 years when the bottom band of the Stanley Cup is filled with names of champions, the top band is removed and retired to be displayed in the vault of the Hockey Hall of Fame in Toronto.

The four bands below it are slid up one place and a new blank band added to the bottom. The first winning team engraved on the newest band is thus, in theory displayed on the trophy for the next 65 years.

The UPI Marketing Inc Stanley Cup replicas are the most realistic but also the most expensive available. 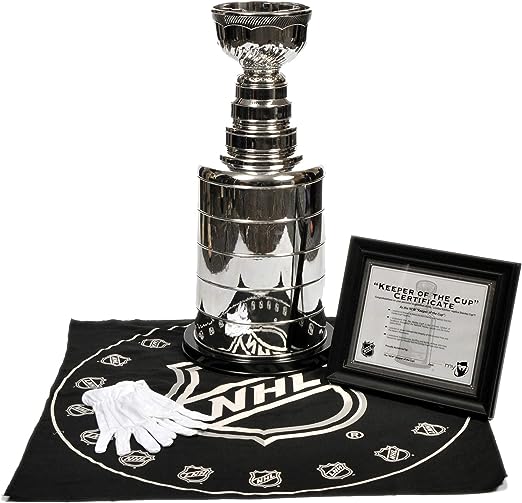 These Stanley Cup Replicas are the nicest and if you want the realist replica and money isn’t an issue, these are probably for you.

There are lower priced Cup replicas that are almost as nice though.

These replicas are 25 inches thats about 10 inches less than the real Stanley Cup and weighs about half the weight of the actual trophy.

Each of these trophies comes with White Gloves, NHL Table Cloth, “Keeper Of The Cup” Certificate and Black Velvet Storage Bag to make it that much fancier.

This 14 inch Stanley Cup replica is Amazon’s top seller. If you order this cup that’s who will be sending it to you.

It is much cheaper than the above Stanley Cup replicas but is 11 inches smaller. This is for the fan that wants a nice product to display but doesn’t want to break the bank to do it.

This cup comes with a sticker sheet of each NHL team, so if you want you can display it on above the base at the bottom

It all depends on what you’re looking for and what’s your price range. You will get good value for the money with this replica.

You won’t get the bells and whistles either but you will get a sticker for each NHL team to display on the cup if you choose to.

All in all you can’t go wrong with this model if you’re on a budget.

For your Desk or Shelves

This next Stanley Cup replica is perfect to display on a desk, shelves or on top of a bureau, etc. You get the idea. A ledge in your kitchen.

It’s 8 inches and priced nicely. It’s a can’t miss for someone who wants a miniature Stanley Cup replica. 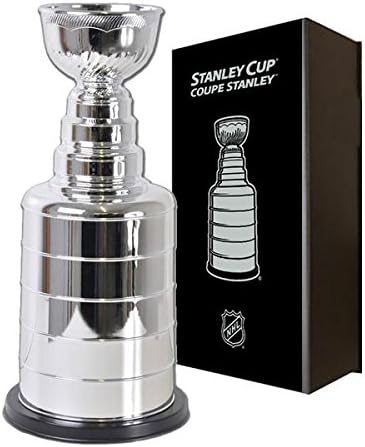 This is nice if you want a miniature version of a Stanley Cup replica. It won’t stand out like the bigger versions and can be placed on desks, bureau’s, ledges, etc.

You won’t have to clear room for it.

ON Ice From Fanatics

These next Stanley Cup Replicas are memorabilia. They can be displayed but not for the size of the cup but because it comes with actual ice (water) from that years Stanley Cup Finals.

These are obviously limited edition and come with a certificate of authenticity. 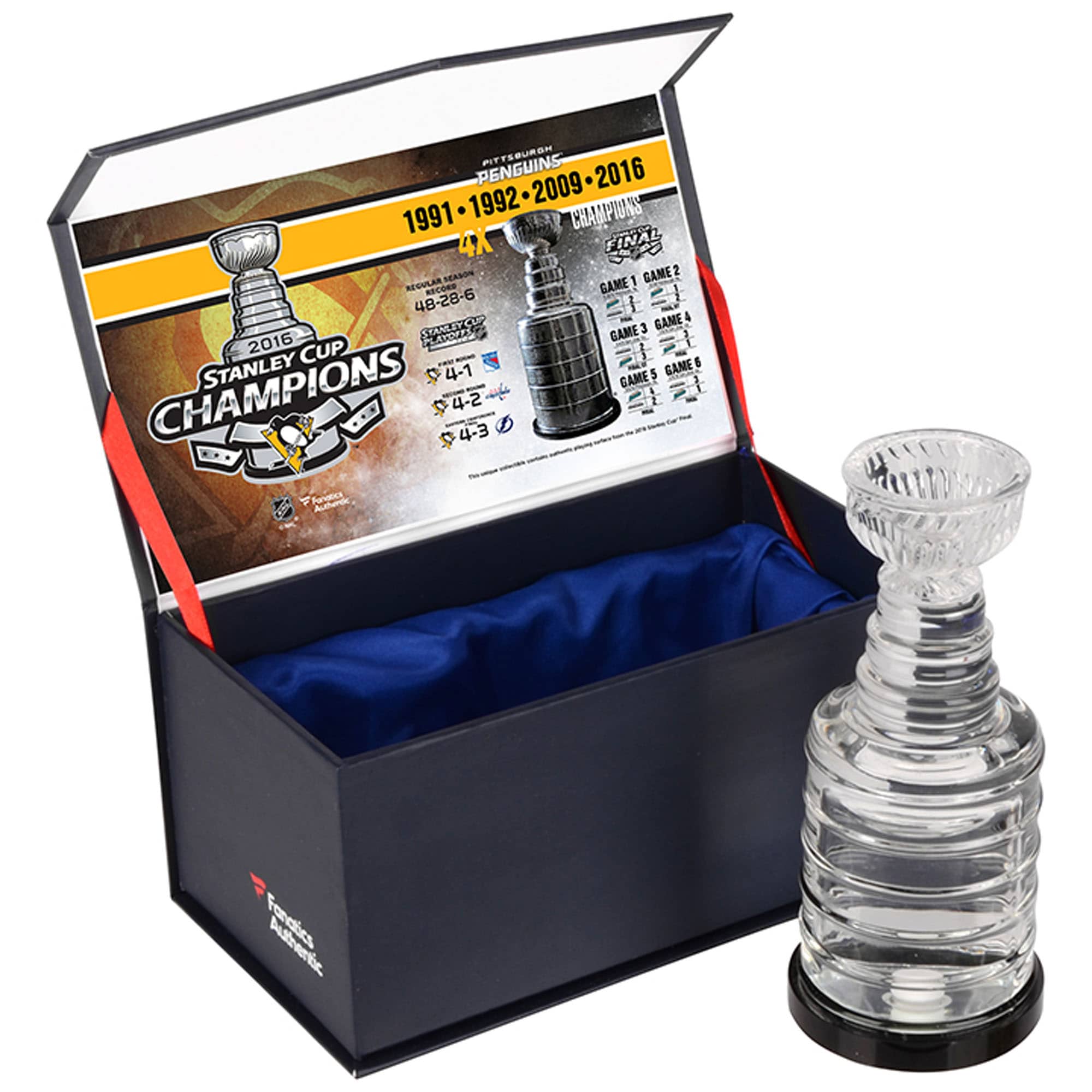 Commemorate the Pittsburgh Penguins as the 2016 Stanley Cup Champions with this crystal trophy. Each trophy comes filled with melted game-used ice from the Stanley Cup Finals and shipped in a Fanatics Authentic gift box. It is officially licensed by the National Hockey League and comes with a certificate of authenticity. Base is approximately 3" in diameter - trophy is about 5.5" tall. 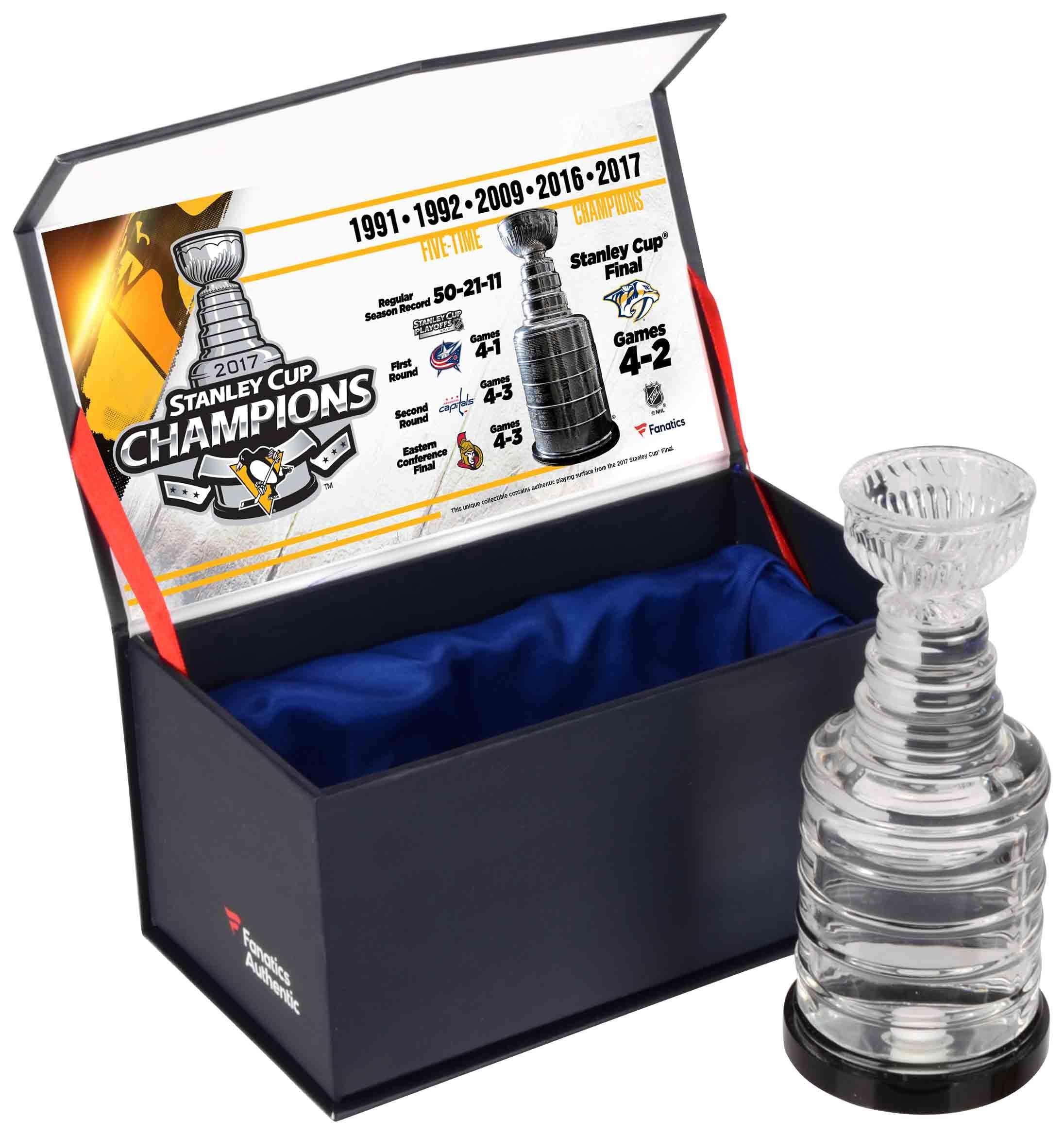 Commemorate the Pittsburgh Penguins as the 2017 Stanley Cup Champions with this crystal trophy. Each trophy comes filled with melted game-used ice from the Stanley Cup Finals and shipped in a Fanatics Authentic gift box. It is officially licensed by the National Hockey League and comes with a certificate of authenticity. Base is approximately 3" in diameter - trophy is about 5.5" tall. 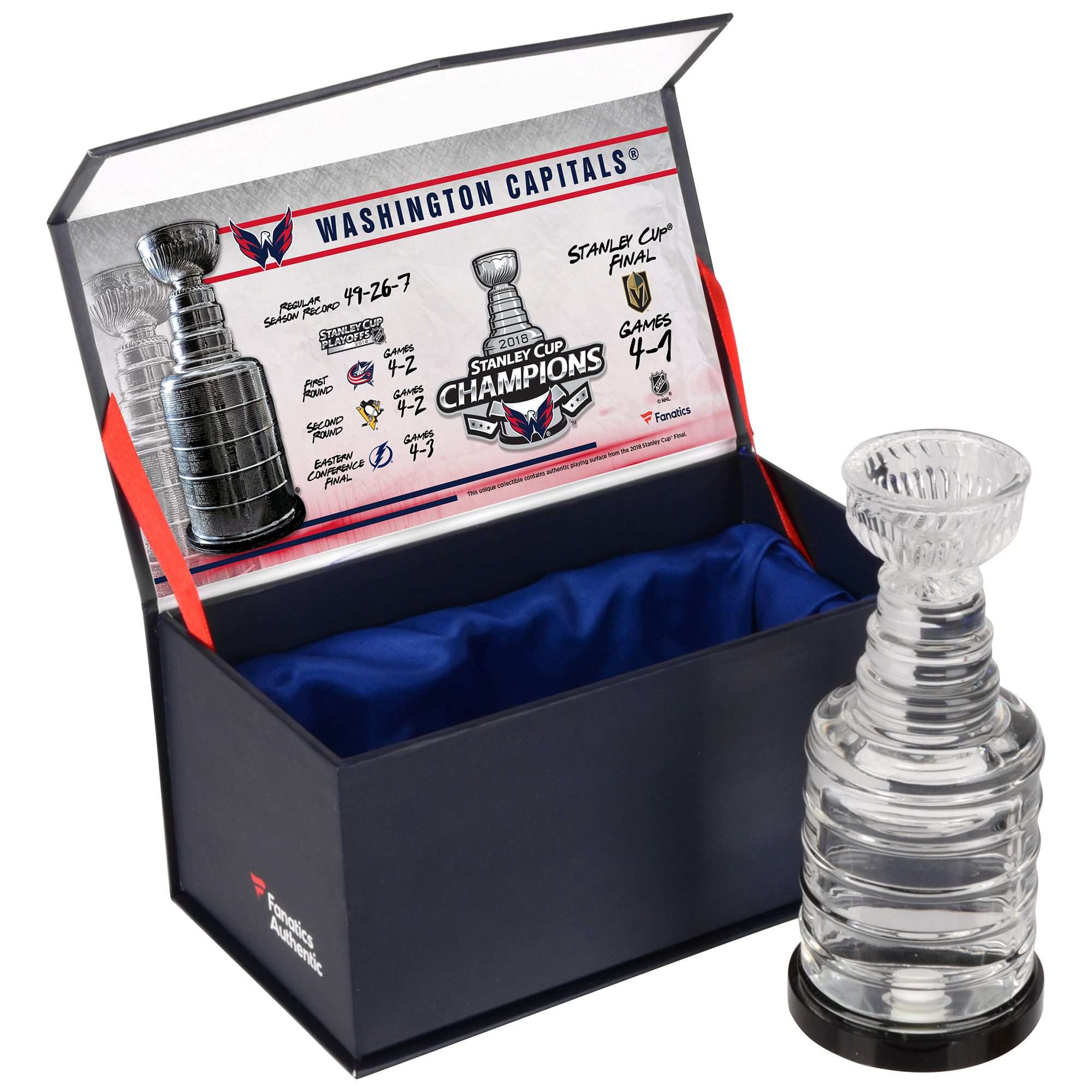 Commemorate the Washington Capitals as the 2018 Stanley Cup Champions with this crystal trophy. Each trophy comes filled with melted game-used ice from the Stanley Cup Finals and shipped in a Fanatics Authentic gift box. It is officially licensed by the National Hockey League and comes with a certificate of authenticity. Base is approximately 3" in diameter - trophy is about 5.5" tall. 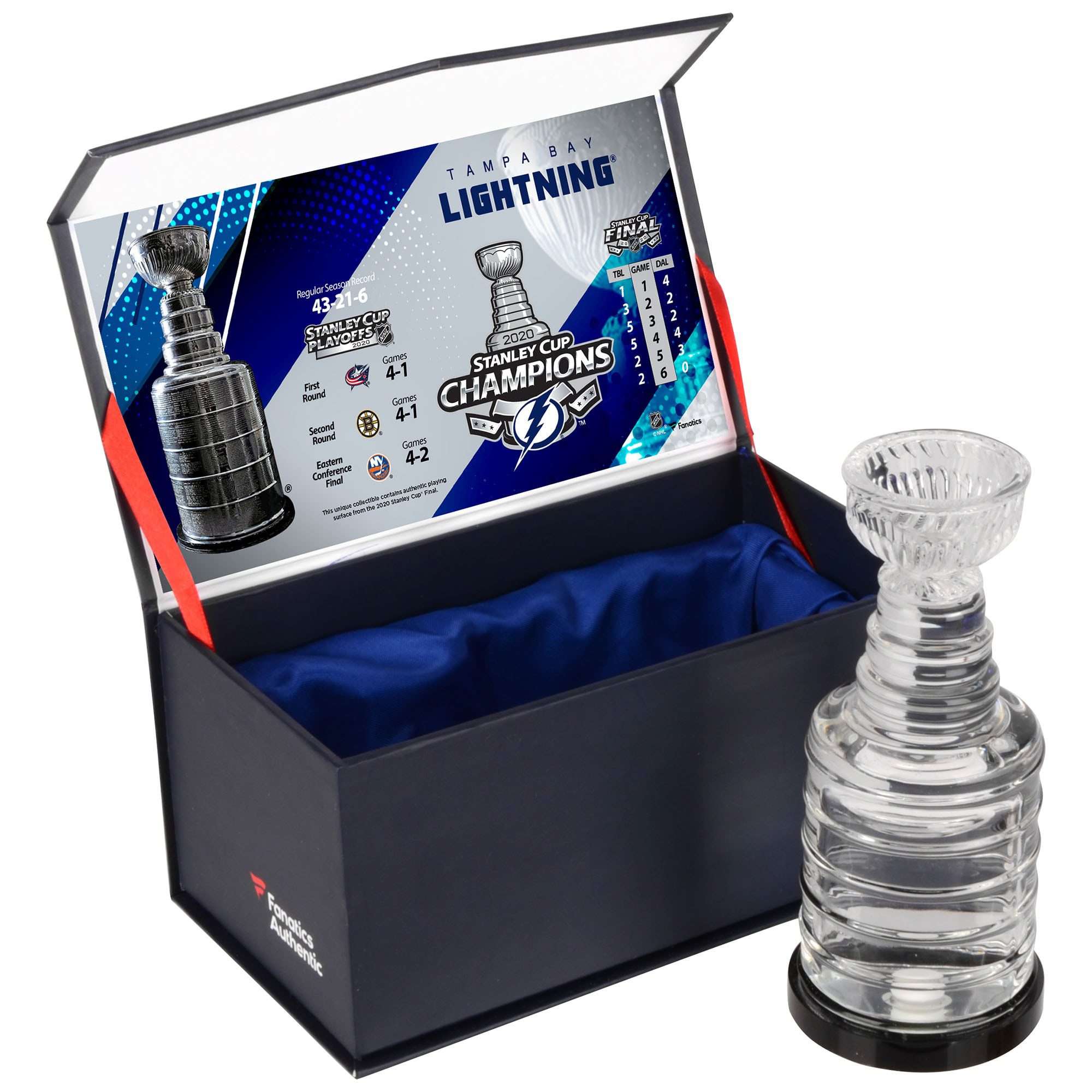 Commemorate the Tampa Bay Lightning as the 2020 Stanley Cup Champions with this crystal trophy. Each trophy comes filled with melted game-used ice from the 2020 Stanley Cup Finals and shipped in a Fanatics Authentic gift box. It is officially licensed by the National Hockey League and comes with a certificate of authenticity. 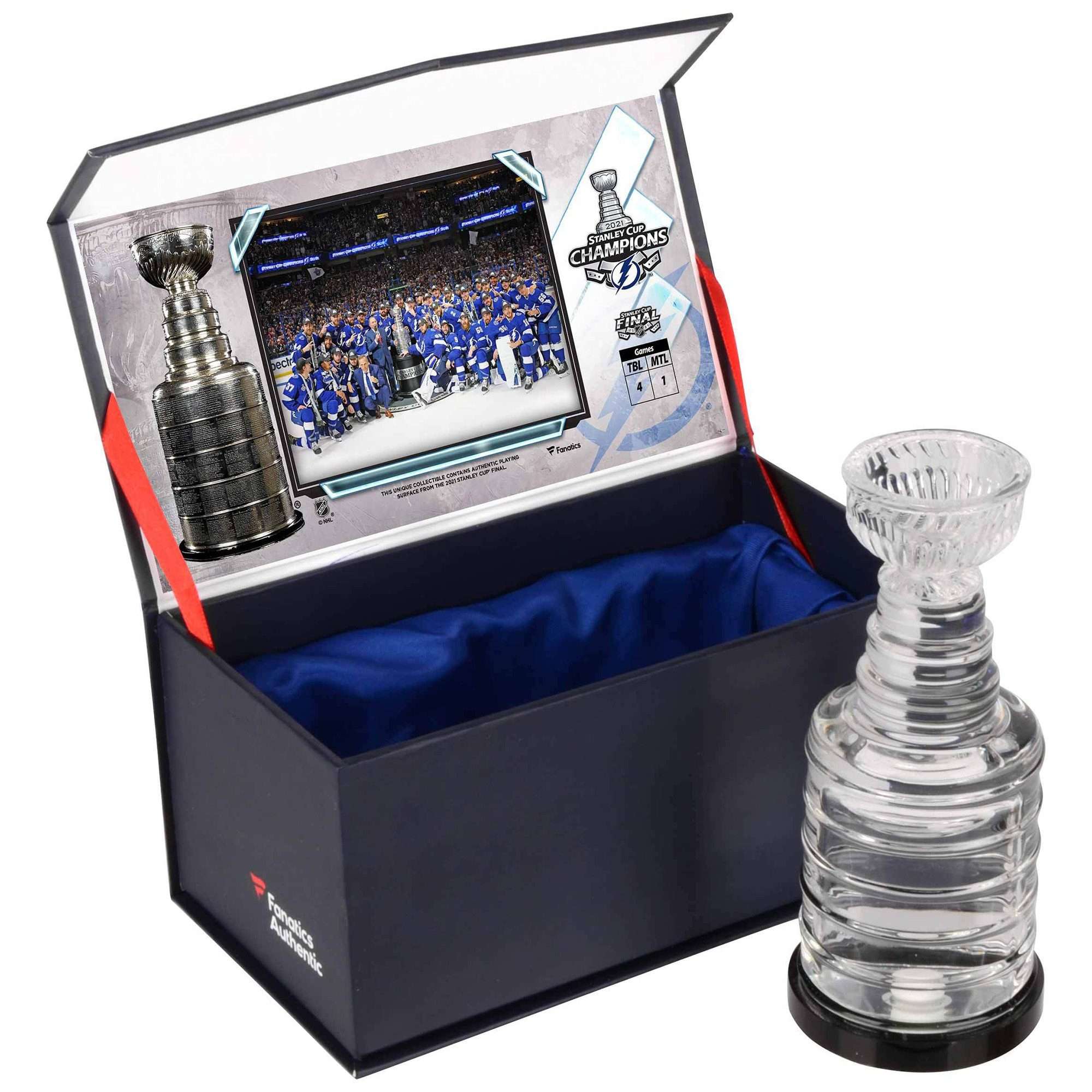 Take your collection of NHL memorabilia to the next level with this Tampa Bay Lightning 2021 Stanley Cup Champions Crystal Stanley Cup - Filled with Ice From the 2021 Stanley Cup Final. Whether displayed in your home or office, it's the perfect way to highlight your passion for the NHL for years to come.

I’m giving this 5-stars but I wouldn’t buy any of these because none of the teams are my team.

I would seriously consider buying this if the Philadelphia Flyers had won a recent Stanley Cup.

What makes this a unique collectible is that this is the actual ice that these teams played on in the Stanley Cup Finals.

Making this a possible investment for the future. Unlike autographed memorabilia like autographs, if the athlete is alive, more can always be produced.

Especially in this market today. There is only a very limited amount of ice from any of these Stanley Cup Finals that can be sold.

If you didn’t notice the 2019 St. Louis Blues aren’t among the offers. They don’t sell them anymore.

If anyone has any questions, you can reach me at PeaceDot Sports.

Sixers payroll reality after being sold the Brooklyn Bridge