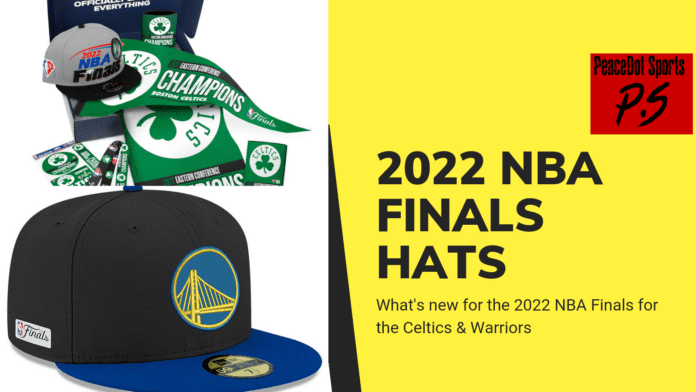 A look and comparison of the hottest hats and gear for the 2022 NBA Finals. Whether you’re a Boston Celtics fan or rooting for the Golden State Warriors, the newest NBA gear for the Finals is available.

Get NBA Finals hats and other items from Fanatics featuring the Eastern and Western Conference champions. Each Fanatics pack is valued at over $105 but sells for $84.99.

Just click on either offer and the right click the discount button and a green check mark will inform you that the discount has been applied to the offer.

Both the Boston Celtics and Golden State Warriors packs are limited edition and come with the New Era Locker Room Hat featuring the same graphics worn by the team immediately after the win, a 12oz. Can Cooler, a Two-Sided On-Court Locker Room Towel, a conference champion ship pennant, NBA Finals decal stickers for each team, and a team lanyard keychain.

With proven veteran leaders and the league's young stars all chomping at the bit to claim the crown of NBA Champion, this year's postseason has you on the edge of your seat. Your Golden State Warriors kept the momentum going strong and are one step closer to the title after becoming the 2022 Western Conference Champions! Celebrate the team and get pumped up for the Finals with this Fanatics Pack Gift Box. It is valued at $105+ and is packed with specially-selected Wincraft by Fanatics items including the New Era Locker Room Hat featuring the same graphics worn by the team immediately after the win, a 12oz. Can Cooler, a Two-Sided On-Court Locker Room Towel and more! These pieces will let everyone know you're a proud Golden State Warriors fan. Buy Now with Discount
We earn a commission if you make a purchase, at no additional cost to you. Boston Celtics Fanatics Pack 2022 Eastern Conference Champions Gift Box - $105+ Value
$84.99
Buy Now
We earn a commission if you make a purchase, at no additional cost to you.

Room Towel and more! These pieces will let everyone know you’re a proud Boston Celtics fan.

I think these NBA Finals hats gift boxes are OK. I’d probably like them better if I was a fan of either team.

Personally I see these as a collectable and not as much as a wearable item. If that’s your purpose for purchasing this gift box, I’d give it a better rating.

The towel looks pretty cool but you can get a nicer hat for much cheaper in the end.

The first hat is a throwback Chicago Bulls NBA Finals hat from 1993. This is a great pick for Michael Jordan fans, Bulls fans, and fans of NBA History that want something different and vintage.

I really like this hat, I would’ve given it a higher rating if it was a fitted cap. If that doesn’t matter to you and you like this Bulls hat too, this might be your bag.

You can expect a quality product from Mitchell & Ness.

I really like this New Era fitted cap. I’m not a Warriors fan but I’d rock this hat. Golden State Warriors New Era 2022 NBA Finals Side Patch 59FIFTY Fitted Hat - Black
43.99
Buy Now
We earn a commission if you make a purchase, at no additional cost to you.

This is my favorite hat that I’ve seen related to the 2022 NBA Finals. New Era fitted caps are are my preferred brand and style.

If you like this NBA Finals hat and are thinking about buying it, you should, its a top-notch, stylish hat

I have an issue with this NBA Finals cap and that issue is that I’m a Sixers fan. That’s my only issue. I wouldn’t put this hat on my head.

Other than that, if you personally like this Celtics cap, everything I saids about the Golden State fitted review above, applies here too.

They’re the same hat with different logos. They have the 2022 NBA Finals side patch sewn into them. Both are New Era fitted. Only difference is the brim of this hat is solid and not a two-tome cap like the Warriors item above. Boston Celtics New Era 2022 NBA Finals Side Patch 59FIFTY Fitted Hat - Black
$43.99
Buy Now
We earn a commission if you make a purchase, at no additional cost to you.

I’m biased. This is a Nice hat but as a Sixers fan, this cap wouldn’t get anywhere near my mind.

In the end this is almost the same NBA Finals hat as the Warriors cap. The only difference is that it’s not two-tone but solid black.

If this is your team or your style, this is a quality product to buy.