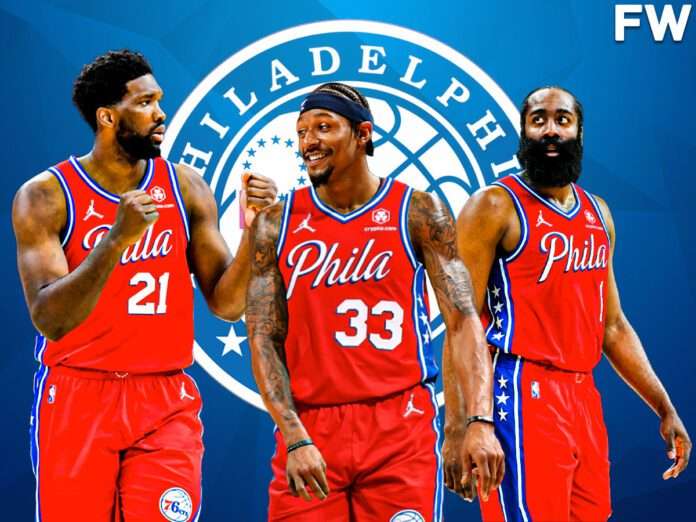 I don’t know if this is just her own preposterous, laughable take, showing why she shouldn’t be talking about the NBA salary cap on national television or if it is coming from someone within the 76ers organization.

I’m very worried and wish I knew where Ramona Shelburne’s take originated from. Many times media and analysts create things to talk about just to create buzz. Hoping talk leads to these takes trending.

This almost always happens in the middle of the summer after the draft and most of free-agency is done. The time of year there isn’t really anything to talk about, so these analysts on T.V create buzz based on rumors alone.

It could be seen everywhere during the Covid-19 shutdown in 2020. These people need something to talk about on television. What worries me is there are plenty of newsworthy, truthful stories to cover during the NBA playoffs.

It’s not the time of year that this usually happens in the NBA. If Morey wasn’t Daryl Moron, I’d just dismiss it as Ramona being outrageous.

Facts are facts and like they say if a tree falls in the forrest does it make a sound? The collapsing tree of course being the Harden acquisition. This conversation wouldn’t’ be happening if Daryl Morey hadn’t made the decisions he did in 2022.

The top two aspects to winning NBA championships are defense and ball protection. Without them being done well, how many points you score is irrelevant.

HOW MANY POINTS YOU SCORE IS IMPORTANT BUT IT’S NOT THAT IMPORTANT. IT’S NOT LIKE IT’S THE DIFFERENCE IN WINNING/LOSING PLAYOFF SERIES”.

If this seems ludicrous to you, rethink what you know about NBA basketball, there is a lot for you to learn about this game.

Protect the ball like your hands were marinated in Butter

James Harden is an awful and lazy defender. He is also a turnover machine just like Russell Westbrook is. The Sixers and the Lakers are is similar situations based on what they did and what they should have done if they wanted to improve.

These kind of players that need to dominate the ball, if not, they’re liabilities on the court in any era of NBA basketball.

They never leads teams to championships.

James Harden holds the NBA record for the most turnovers in a season all-time. In fact, he has five-of-the-top-seven turnover seasons in NBA history.

Within the biggest of games, lies the most substantial of possessions. These possessions are the difference in winning and losing championships. They separate the winners from the losers.

Betting the next 5 years on rolling snake eyes

If the Sixers were to restructure James Harden’s salary it would be like placing a bet to hit on snake eyes at a casino (1-36 odds). Except they won’t be wagering five dollars in hopes of winning $150.00, they’d be wagering the next half decade.

Restructuring the James Harden contract wouldn’t work by itself to give Philadelphia money to spend on a free-agent this summer. It doesn’t work like that.

The Sixers have a taxers mid-level exception they can use and they can sign minimum contracts this summer as of now.

The Sixers can’t engage in any sign-and-trade deals if Harden opts-in for his full salary.

Tobias Harris’ salary in 2021-22 was $36 million. If the Sixers would’ve traded Harris during this past season they would’ve had to bring back $29 million in salary from another team.

The James Harden contract could end after 2022-23. He’d be making over $47 million next season. I’m confident he won’t opt-out because I’m not confident that he would make $25 million on the open market.

If James was a good defender and protected the ball this might not be an awful idea, but he isn’t. That’s why I wouldn’t want him on my team in his prime.

Patience is a virtue

What’s been done has already happened. Daryl Moron still has a job but he took any real hope that the Sixers could contend in the 2022-23 season.

Restructuring James Harden’s contract, giving him less money, it destroys the next half decade.

I’m worried Daryl Morey and Elton Brand won’t stop until they destroy every opportunity for the Sixers to win a championship with Joel Embiid. “No one on this Earth is mistake free. But if you’re unlucky, an individual will dig in their heels and insist they’re right even when all the evidence suggests otherwise. It’s a maddening situation anywhere. But in business it can be disastrous. It creates conflict that hinders productivity or affects your ability to move forward with or give proper information to appropriate individuals”.

“According to psychologist, speaker and author Guy Winch, most people who consistently refuse to admit they’re wrong do so because they have incredibly fragile egos. They clam up and insist they’re right, demonstrating what experts term “psychological rigidity”, as a defense mechanism. Their subconscious feeling is that, if they dig in their heels, they can protect themselves from the consequences that might come from their imperfection and fallibility (e.g., being seen as weak, loss or retaliation). Winch also notes that some people go to extraordinary lengths in this process, even changing facts and convincing themselves of new realities in their own minds to escape culpability“.

Daryl Morey needs to be fired. He made an incredible mistake that I’m not looking at with the benefit of hindsight. I said trading for James Harden’s salary would be a massive mistake and a nightmare. Then I wrote an article about it before he ever played a game for the 76ers.

Morey won’t own up to his mistake that he should’ve never traded Ben Simmons for James Harden. It’s over now though. Once done can’t be undone son.

All that can be done now is make the best decisions for the future with the teams talent and its payroll, given the situation.

What the Sixers need to do

What the Philadelphia 76ers need to do is let James Harden opt-in to his second highest salary in the NBA for 2022-23.

Tobias Harris has the 13th biggest salary in the NBA. You can’t give players more money with years than what their talent warrants. This is why the Knicks have been irrelevant for the past 20 years.

The James Harden contract that he is on now, needs to be the only one that he ever plays on in Philadelphia. Yes, Sixers fans that means we lose 2022-23. Patience is a virtue. We can’t bet on snake eyes.

The year after that Tobias Harris’ contract comes off the books too. This gives the Sixers complete freedom. I don’t know if Joel Embiid will be broken by then but we can cross our fingers and hope. It’s better than the alternative.

I’m not sure if Morey is doubling down on his stupidity or if he doesn’t even realize he made a calamitous decision. I realized it from day zero, but either way, its scary for Sixers fans with Morey handling the launch codes.

Here’s the thing, if James Harden’s contract is restructured and then the Washington Wizards are willing to trade do a sign-and-trade with the Sixers, then a move can be made, POSSIBLY.

For the Washington Wizards general manager Tommy Sheppard isn’t even coming to the table unless Tyrese Maxey is included in the deal. Draft picks too. Sheppard is more advanced as a GM than Daryl Morey is.

He isn’t trading Bradley Beal and his new 5-year, $242 million dollar supermax contract for Tobias Harris. It’s smarter to just not sign Beal and have cap room. No one wants their team payroll to be hindered by players paid like franchise superstars that aren’t that.

That is except maybe Daryl Moron. Take your collection of Philadelphia 76ers memorabilia to the next level with this Joel Embiid Game-Used City Edition Jersey. Worn during the first quarter against the Los Angeles Clippers on January 21st, 2022, "The Process" popped off for 40 points, 13 rebounds and six assists in the game. Tailored to fit player and team specifications, it provides the ultimate keepsake for serious collectors and fans of the Philadelphia 76ers superstar center Joel Embiid.

This would be the end until next decade

This graphic of a possible supermax for two-time NBA MVP Nikola Jokic is what Beal’s contract would look like. Bradley Beal wouldn’t take less money its why he held out for this Superman contact.

A new Bradley Beal contract in Washington would be the richest deal in NBA history. It would be a five-year $245 million deal, upending the $228 million contract that Giannis Antetokoumnpo signed last season.

If Beal were to opt-out of his final season to become a free-agent the biggest deal he could receive on the open market is a 4-year deal at $179 million.

If the Sixers do this like in 2021-22, their chances of winning a championship are zero percent. This is because Beal and Harden aren’t good defenders. You can’t win an NBA championship if perimeter defense is a liability. Not ever, not even once in any NBA season

HOW MANY POINTS YOU SCORE IS IMPORTANT BUT IT’S NOT THAT IMPORTANT. IT’S NOT LIKE IT’S THE DIFFERENCE BETWEEN WINNING/LOSING PLAYOFF SERIES’

It would start with the James Harden contract, who at over $30 million-per-season but isn’t a star at all. Many people think its a mistake to even consider giving Beal a supermax deal. For Philadelphia it could be a disaster as far as winning is concerned

Nothing else can be done, if this were to occur. Nobody else on the team will be making even $10 million. No depth, no bench, no championships, no future.

Last chance for the future, Philadelphia 76ers fans. NO ELTON BRAND AND NO DARYL MOREY ASAP…