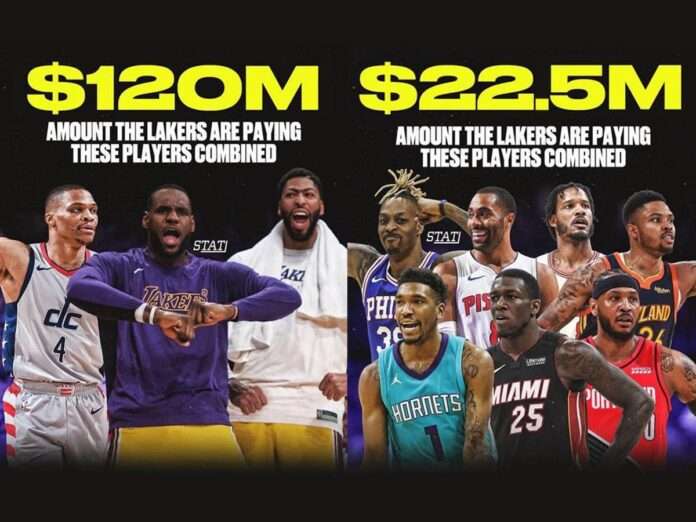 This is a look at the 2022-23 Lakers payroll and the teams immediate future. Los Angeles general manager, Rob Pelenka made some decisions that affected the Lakers payroll within the NBA salary cap in regards to player salaries after the 2020-21 season.

Here is a look at the options that the Los Angeles Lakers roster has to maneuver within the teams payroll from a salary cap and Lakers salary from a player standpoint.

Buss said she believes that the front office can build another championship team. “There’s no reason for me to think we can’t win with them,”. MS. BUSS THIS IS YOUR ONLY MISTAKE.

On July 31, I wrote an article about the Los Angeles Lakers acquiring Russell Westbrook, here are some of the things I wrote about this transaction days after it occurred. These are pasted from the July 31, 2021 article.

2)”Here is the first problem with Russell Westbrook joining the Lakers, when Russ is playing on a team that is a first round out in the NBA playoffs, his problems donÃƒÆ’Ã‚Â¢ÃƒÂ¢Ã¢â‚¬Å¡Ã‚Â¬ÃƒÂ¢Ã¢â‚¬Å¾Ã‚Â¢t show up because his weaknesses on the court only show themselves and matter in championship level situations”.

5)”Russell Westbrook joins the Lakers payroll, making more $$ than LeBron James and Anthony Davis. He has a career assist-to-turnover ratio of 2.07. This will stop a championship contender in its tracks”.

7) “Signing players to more than they are worth doesnÃƒÆ’Ã‚Â¢ÃƒÂ¢Ã¢â‚¬Å¡Ã‚Â¬ÃƒÂ¢Ã¢â‚¬Å¾Ã‚Â¢t lead to success. Russell Westbrook is the highest paid player on the Lakers payroll“. “Does this seem right”? Lakers Vice-President of Basketball Operations and General Manager Rob Pelinka is/was a Division 1 basketball player at Michigan, a lawyer and a sports agent.

What he isn’t qualified to be is an NBA general manager. If he was, he’d never have absorbed Russell Westbrook’s salary into the Lakers payroll.

This is a “YOU’RE FIRED” type of MISTAKE. It proves beyond a shadow of doubt that he doesn’t possess the expertise needed on the basketball end to be successful at this job.

Pelenka fired Lakers coach Frank Vogel, I don’t know if he needed to be fired but I do know Pelenka needs to fire himself to fix the problem.

I didn’t play college basketball, I didn’t even go to college but if you give myself and Rob Pelenka an NBA franchise with the same talent and salary cap factors, I wouldn’t make these type of mistakes. These cost NBA teams entire seasons by the fallout and damage produced.

Pelenka could probably get a job digging graves at any cemetery in Los Angeles after this. He didn’t seem to have any problems driving the Lakers salary and team payroll into the ground.

He did it rather seamlessly and in one fell swoop by adding Westbrook to the Lakers contracts on payroll. The fourth highest salary in the NBA, this isn’t the guy that should’ve become the newest Laker player. Far from it.

Now many can see what I learned last July, Rob Pelenka isn’t qualified to hold down his job with the Los Angeles Lakers.

I didn’t even know who Pelenka was but once I heard Lakers acquire Westbrook, I thought “what idiot orchestrated this”?

Understand, if Russell Westbrook doesn’t have the fourth biggest salary in the NBA, this wouldn’t be the killer that it is. Since he does, it’s a death sentence. Calm down Lakers fans, get a different GM and wait three years and you can petition the Supreme Court for a writ of CertiorariÃƒÆ’Ã¢â‚¬Å¡Ãƒâ€šÃ‚Â and appeal this ruling.

You ain’t the one

As I said I’m not a lawyer or a sports agent, I’m is a person who spent 20 years studying every NBA player on every team from every season with film on them. Studying and breaking down the film.

Somewhere after the first decade and before the 15-year mark, I began seeing basketball games like Keanu Reaves see’s Agent Smith at the end of the first Matrix movie.

I sometimes write articles about the NBA’s salary cap and I never write about things I don’t fully understand.

Wilt Chamberlain Los Angeles Lakers 1971-72 Swingman Purple Replica Jersey
$130.00 $118.00
Buy Now
We earn a commission if you make a purchase, at no additional cost to you.

The Washington Wizards acquired Russell Westbrook for John Wall in a trade. This wasn’t a bad trade because these two players have the third and fourth biggest salaries in the NBA.

Meaning that the Washington Wizards were already spending the amount of Westbrook’s salary to John Wall, who can’t walk down the steps in his own house without rupturing his Achilles Tendon.

The Wizards weren’t affected by the salary cap by making this move, they decided they’d rather have a player who could actually play than one who couldn’t.

On the flip, the Houston Rockets knew what they had in Westbrook and decided that they’d rather test their luck on John Wall’s health and ability to play.

Essentially, without words, saying, We’d rather have a player who can’t play NBA basketball because of injuries than a healthy Russell Westbrook.

This wasn’t the Lakers situation. They just went out of their way to not be contenders and make it so they couldn’t move financially.

I read a few articles released on major publications that say the Lakers can sign a mid-level exception in the 2022-23 off-season. While this is true based on facts, it’s also not possible.

The Lakers are at this projected tax apron right now (if actual number isn’t the projection, it’ll be lower than, not higher) for the 2022-23 with only 7 players signed. They will have to round out the roster with minumum contracts and a taxers mid-level exception since they don’t posses any draft picks in the first round of the upcoming NBA Draft.

This makes it impossible to use the mid-level exception but even if they had a complete roster at their number, it would be a catch-22. Los Angeles Lakers New Era 2022 NBA Draft 59FIFTY Fitted Hat - Cream/Purple
$49.99
Buy Now
We earn a commission if you make a purchase, at no additional cost to you.

I’m a Sixers fan and with 2:40 left in game 6 against the Miami Heat, the 76ers season will end the only way it could, in complete failure.

I recently wrote an article about the Sixers payroll. I thought who is in a similar situation as Philly? It wouldn’t have been any worse if Daryl Morey literally got sold the Brooklyn Bridge.

Don’t get me wrong having Harden in his prime is a nightmare. Same reason I’d never want Russell Westbrook on my team.

James Harden holds the NBA record for turnovers in a season. In fact, Harden hold 5-of-the-top 6 turnover seasons of all-time.

The other season is Russell Westbrook. LA New Era Crossover 59FIFTY Hat - Purple
$38.99
Buy Now
We earn a commission if you make a purchase, at no additional cost to you.

The top two aspects to winning NBA championships are defense and ball protection, without them how many points you score is irrelevant.

HOW MANY POINTS YOU SCORE IS IMPORTANT BUT IT’S NOT THAT IMPORTANT. IT’S NOT LIKE IT’S THE DIFFERENCE IN WINNING/LOSING PLAYOFF SERIES’.

The Lakers payroll will be rid of both LeBron James and Russell Westbrook’s salaries after the 2022-23 season. Trading Russ isn’t really an option but anything is possible because we have named a couple general managers in this article not equipped with the proper knowledge to know better.

Really, the only option is trading LeBron James or Anthony Davis, but is what you’re bringing back as good? You can’t trade one and not bring back the majority of the salary either.

It’s even less for the Lakers salary because they are a taxer’s team. If the Lakers payroll wasn’t a taxers payroll then they wouldn’t have to bring back as much but here is the CBA. What it means is to trade LeBron James’ almost $45 million in salary they’d have to return about $37-38 million of it in trades.