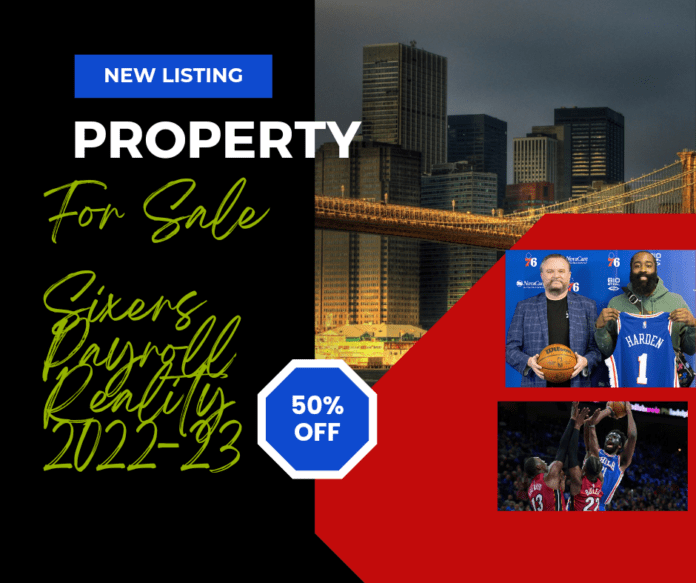 This is a fact driven look at the Sixers payroll reality after being sold the Brooklyn Bridge. It takes the Sixers salaries for 2022-23 into effect for the future. Looking at what is possible for the Philadelphia 76ers moving forward.

The Sixers acquiring James Harden was a massive mistake or as I called it when it happened “a nightmare”. I’D LIKE TO NOW WELCOME PHILADELPHIA TO ELM STREET.

The Sixers President of Basketball Operations, Daryl Morey needs to be fired for buying the Brooklyn Bridge. Anyone with any evaluation skills could easily see within seconds that James Harden was in decline in Brooklyn.

This was evident, you didn’t even have to look for it. IT SMACKED YOU IN THE FACE.

The bearded Sixers guard won’t make nearly as much as the $46,872,000 salary he will make if he opts-in for the 4th and final season of his current contract. Philadelphia 76ers New Era 2022 NBA Draft 59FIFTY Fitted Hat - Cream/Royal
$49.99
Buy Now
We earn a commission if you make a purchase, at no additional cost to you.

The Sixers payroll was helped when he unloaded Al Horford’s contract. What he’s done since then aren’t lucid business decisions for a person holding his job title.

Morey needs to no longer hold this title. He needs to be fired or called a witch and set on fire. SOMETHING QUICKLY MUST BE DONE.

This is just a projection but if it turns out to be different, it’ll be lower than these estimates, not higher.

There are many restrictions placed on teams over the threshold and above the tax apron in the NBA. This also goes for teams that after making a transaction go beyond this number. Meaning if a team is a couple million below the apron, they can’t make a move that puts them over it. Not unless they’re acquiring a players Bird Rights.

For example if the Sixers find themselves $3 million under the apron and wanted to sign a free-agent for $18M per season, they couldn’t because this would put them over the apron for that season.

They can use a taxers mid-level exception. The taxers MLE is will be about $6.3 million they also have a small trade exception that’s under $2 million from the Andre Drummond trade.

This gives the Sixers roughly $8M they can spend in the 2022-23 NBA off-season as is now. Anything else would make the team hard capped until the following June 30.

Going over the tax Apron in this manner makes that team hard-capped for that season. Meaning that this hypothetical player couldn’t be signed because signing him puts the team over the apron. It’s a catch-22.

At the same time hard capping the team, making it impossible to sign the player on two different levels. This is the NBA causing the same result twice. It’s used to avoid any potential loopholes.

… the team becomes hard-capped at the Apron for the remainder of that season. This eliminates any potential loophole where a team could first use one of these exceptions and subsequently add salary to go above the Apron, since the reverse — adding salary first and then using the exception — would be illegal.

Any trades the Sixers make have to have them below the tax apron after completion or the trade can’t happen. Allen Iverson Philadelphia 76ers Mitchell & Ness 2003-2004 Hardwood Classics Reload 2.0 Swingman Jersey - Black
$129.99
Buy Now
We earn a commission if you make a purchase, at no additional cost to you.

What can be done by Sixers

As I said before the Sixers salaries for the payroll in 2022-23 are close to $154 million. This puts the Sixers right around the luxury tax apron now.

Meaning the Sixers team today is pretty much the team that will be on the court in 2022-23. The Sixers payroll basically will only allow them to sign minimum contracts and the teams draft picks.

Rule – A traded player may be replaced in a non-simultaneous transaction by one or more players acquired in a different trade whose salaries together do not exceedÂ 100% of the traded player’s salary plus $100,000.

There are different rules for trading under the NBA’s salary cap structure, depending on if you are under the cap, into the tax, or above the apron.

One thing is certain, you can’t trade a player making $40 million and not return most of that salary back in any trade.

The amount that has to be taken back by a team in a trade has to do with if the teams are below the salary cap or if one or both are taxer teams.

An example, trading James Harden for a player making $25 million and getting two picks with it. That’s not allowed.

That’s the reason Seth Curry and Andre Drummond had to be included into the Ben Simmons trade.

Simmons for Harden couldn’t be done because James makes over $10 million more than Ben does. The Sixers in theory can make trades but don’t hold your breath.

Philadelphia has players who’s salaries are in conflict with their talent. You can give players years & money that exceed what they are in actuality. The Knicks did this and it’s the reason they have been irrelevant for the past 20 years.

Tobias Harris is one of the Sixers that could possibly be traded. I don’t see it because of his salary. When Tobias signed his current deal with Philadelphia, he was a top five salary in the NBA.

He is being paid like a franchise superstar. The years are the real killer. Having a player making more than his talent warrants means that you can’t sign that superstar that’s actually worth that franchise player contract.

Tobias is a very nice NBA player. When the 76ers acquired him at $18M on the last year of his contract, most NBA teams would want that player on their team. Elton Brand messed around and gave Tobias Harris a $180M guaranteed five-year contract that he couldn’t possibly live up to.Â

Tobias averages around 17-20 ppg. That’s what you’re getting from him. You won’tÂ get much else. There isn’t another level for Tobias to reach. This is who he is and he will never be better than he is right now.

The Tobias Harris contract is a death sentence for the team that controls it. The 2.5 years left with its exaggerated price tag is an issue for any GM in any front office. The Sixers payroll based on the teams salaries shows that the two highest paid players are playing on bad, just awful contracts.

James Harden shouldn’t ever have been acquired by Daryl Morey. A young player like Tyrese Halliburton today would be giving the team better defense, at least the same scoring and a higher ceiling for the future.

That trade would’ve also gotten the Sixers draft picks and other players from the Sacramento Kings. It didn’t have to be a Sacramento deal.

I’m just using that as an example. What I’m saying is anything would’ve been better than what actually happened. I’m not saying this with the advantage of hindsight either.

I said it when it was a rumor and then I went off the day the trade happened. Most likely the Sixers will have to wait until after 2022-23 to truly contend for an NBA championship.

When Tobias Harris was signed in 2019, I said the Sixers wouldn’t be able to win a title until after his five-year deal expired. I may have been right back then but no team is winning when their two top salaries are bad investments.

In the NBA’s salary cap structure, signing players to more than what their skills dictate is a killer, its a death sentence.