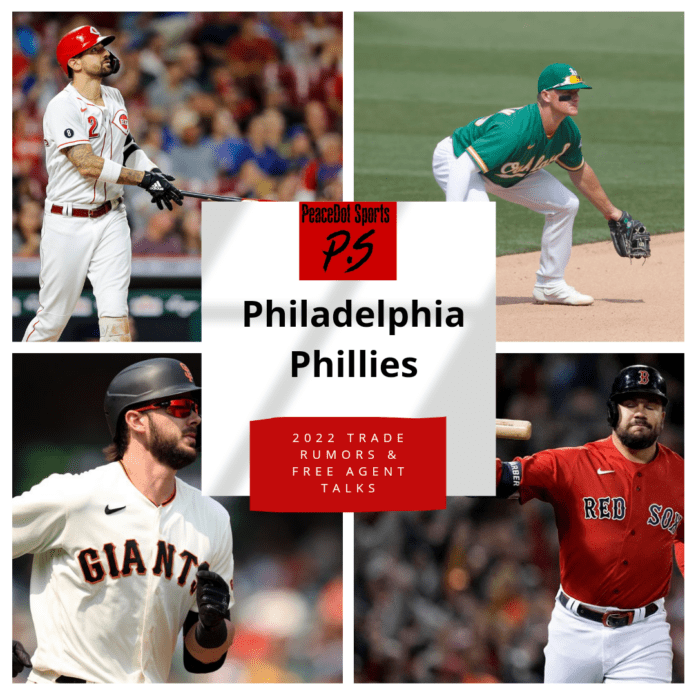 Ever since the Philadelphia Phillies acquired Bryce Harper, they have claimed to care about putting the pieces together to form a realistic championship contender. They actually promised Harper that this would be the case. Then what’s the latest in the 2022 Phillies trade rumors and free-agent talks? What’s real, what makes them contenders and which direction are the Phils headed in?

The latest Philadelphia Phillies trade rumors have the ball club signing free agent outfielder Nick Castellanos. He was a first time all-star in 2021 with the Cincinnati Reds. Nick was drafted with the 44th overall selection in the 2010 MLB June Amateur Draft.

He was drafted by the Detroit Tigers when Phillies President of Baseball Operations, Dave Dombrowski ran the show in Detroit.

Nick finished 12th in the MVP balloting in 2021, batting .309 and driving in 100 RBI. He would be a great offensive weapon for the Phillies and a piece the team would need to contend. He won’t do much for team defense.

The latest in Phillies rumors has the club trading for Oakland Athletics third baseman Matt Chapman. The 2014 25th overall draft pick in the Amateur June Draft is the best defensive third baseman in baseball today.

He is a perennial gold glove winner moving forward and was the American League Gold Glove winner at third base in each of the last three seasons.

Late reports have said that the Phillies might not be interested in meeting the Athletics demands in a trade scenario. I was watching the 2018 MLB Draft when the Phillies selected Wichita State 3B Alec Bohm with the third overall pick. The first thing that was said is that this kid wouldn’t be a third baseman at the MLB level, 2021 proved this.

During that draft it was said that Alec Bohm wasn’t a third baseman and he was the best pure hitter in the draft. Many fans and writers in Philadelphia are under the impression that this kid with 1.5 years of MLB experience hasn’t lived up to his billing.

I assume that most of these people never heard of a sophomore slump or if they have, they aren’t actually aware what this is or that it’s a real thing.

Players go through sophomore slump’s in all sports but it’s more prevalent in baseball and football. In this scenario with Alec Bohm, he was able to hit the ball out the gate at the pro level. This isn’t something many players are able to do with consistency.

In the off-season, heading into 2021, opponents (coaches & pitchers) now had tape on him and used it to their advantage against a young and inexperienced professional hitter. They took notice to what he wasn’t good at and used it against him.

This is essentially what causes a sophomore slump. It is now on Bohm to adjust to what he does at the plate and there isn’t any proof that he won’t be able to do this.

It’s no different than a quarterback having success his first year of starting in the NFL and the competition realizes that he will kill you rolling out to his left, so you make him beat you any other way. The player will either work on his game and adjust or he won’t.

I believe Bohm has the skills to adjust and what I know is he is better than a .247 hitter. He hit .339 in college, in his one full season at Clearwater and Reading, he hit .305 with the Phillies batted .338 as a rookie.

Alec Bohm is a first baseman at the MLB level. I don’t know if playing 3B affected his bat in 2021 or if it was just the sophomore slump.

The issue is Rhys Hoskins. The current Phils first baseman can’t play anywhere else, other than at the DH. At this time last year we didn’t know if the National League was going to implement the DH again, as it did in the 2020 shortened season.

They chose against this. If the DH would’ve been active in the National League in 2021, then Hoskins is the Philly DH and Bohm the first baseman. I think the Phillies should trade Hoskins to an American League team looking for a Designated Hitter upgrade and if they did this now, it would only be one year late.

This isn’t little league, defense matters and having Bohm at 3B, Gregorius at SS and Hoskins at 1B isn’t what you want from a fielding perspective.

Aaron Nola Signed Phillies Majestic Cooperstown Blue Jersey Fanatics 148437 Buy Now
We earn a commission if you make a purchase, at no additional cost to you.

The Phils have already experimented with Rhys Hoskins in left field and to be polite, this is why he is the current Philadelphia first baseman.

Rhys Hoskins is a career .242 hitter with 25-to-30 homerun power. He’s a nice player but he’ll never be a top 10 MLB first baseman. Bohm on the other hand if 2021 was an abirition has the potential to perennially contend for batting titles.

This doesn’t mean much for the Philadelphia Phillies but it could be a start to proving that 2021 was an anomaly.

Many fans are interested in signing 2016 N.L MVP Kris Bryant. For the most part, his stats have been downhill since 2016. All three of these players (Bryant, Schwarber, Conforto) could be big signings but it is also highly likely that these players want big deals that if they don’t live up to, could put the maturation and future of these teams that sign them on pause.

I’d much rather go with Nick Castellanos or Matt Chapman, at least you know what you’re getting as a minimum. If I had to choose one of these players I’d have to take Kyle Schwarber because his deal won’t be as big as Bryant’s and he has had more success recently.

There is much hype to these latest Phillies trade rumors but in the end the Philadelphia Phillies would’ve been in the playoffs each of the last two seasons, if they had gotten even mediocre production from the bullpen.

Will Jeurys Familia and Corey Knebel be enough to strengthen the pen to the point that it isn’t a weakness? What about the starting rotation?

If Zach Wheeler does what he did last season, Aaron Nola comes back to form, Ranger Suarez lives up to 60% of the potential he has shown and Kyle Gibson performs like he did in Texas last season, this will be a very good, excuse me, an excellent rotation.

That’s a lot to depend on going our way. I wouldn’t hate the idea of Phillies trade rumors extending to adding another possible big time starting pitcher.

In my opinion, I’d like to get Castellanos or trade for Chapman before anything else happens unless it involves pitching because no matter what The Phillies get offensively, it won’t matter if the pitching isn’t improved.

If the bullpen isn’t sured up, then nothing else is going to matter in the end.

As I update my original post from almost a month ago, The Philadelphia Phillies trade rumors from last month weren’t just gossip. They are currently 3-3 on the 2022 Major League Baseball season. The

They signed the two free-agents that I thought they should in Nick Castellanos and Kyle Schwarber.

Both bring heavy bats to the Phils lineup but not much defensively. Which could become an issue as the Phillies already weren’t a good defensive fielding team heading into 2022.

As spring training was wrapping up, the Philadelphia Phillies rumors were that Mickey Moniak would be starting in center field for Philadelphia.

This was due to his impressive spring training in Clearwater, Florida. The 2016 first overall draft pick had 13 hits in 35 plate appearances for a .371 batting average for the Phillies. Those 13 hits included four doubles, five homeruns and nine runs batted in.

Unfortunately he suffered a wrist injury that will keep him out anywhere from four-to-six weeks.

Philadelphia signed ex-Phillies centerfielder and 2016 All-Star Odubel Herrera to a one year deal for $1.75 Million contract but he suffered a right oblique strain and hasn’t returned as of yet.

Instead the Philadelphia Phillies have turned to the minor leagues and Matt Vierling has been starting in center field early on. Simon Muzziotti has been called up to the club also to add some depth.

Unfortunately Matt Vierling hasn’t made the most of this opportunity. In six games, he’s had 15 plate appearances and hasn’t gotten even a single hit. His average currently sits at .000.

The club recently traded 2017 first round pick (8th overall) Adam Haseley recently to the Chicago White Sox, he likely would be playing in place of Vierling at this time.

Roy Halladay Autographed Philadelphia Phillies Pinstripe Jersey JSA - Autographed MLB Jerseys
Buy Now
We earn a commission if you make a purchase, at no additional cost to you.

I understand that Phillies Manager Joe Girardi would like to play both Bohm (3B) and Hoskins (1B) together but third base is the hardest position to field.

Everyone expert knew that Alec Bohm, a college third baseman, wasn’t capable of playing the position at the major league level.

Joe Girardi tried it anyway and “they” were right. I’m not sure if Girardi, an ex-catcher and champion, as both a player and manager with the New York Yankees, is doing in this situation.

Does he not understand the importance of defense, especially when his team is one of the worst fielding teams in the major leagues.

A major league third baseman has to have a good, accurate, strong arm. He must have superior reflexes because the ball comes up on you quickly at third base.

This is why third base is referred to as the hot corner. He must have good reflexes, reaction, and awareness.

Philadelphia has been platooning Johan Camargo, Bryson Stott, and Bohm at third base. Camargo showed potential early on with the Atlanta Braves but in the last couple seasons with the Braves, he wasn’t efficient enough.

He has started 2022 off well in Philadelphia.

Who will wind up playing the majority of time at the hot corner in Philly is still up in the air. Likely it will be a platoon situation until someone breaks away from the pack. Alec Bohm Philadelphia Phillies Fanatics Authentic Autographed Cream Nike Replica Jersey
$299.99
Buy Now
We earn a commission if you make a purchase, at no additional cost to you.