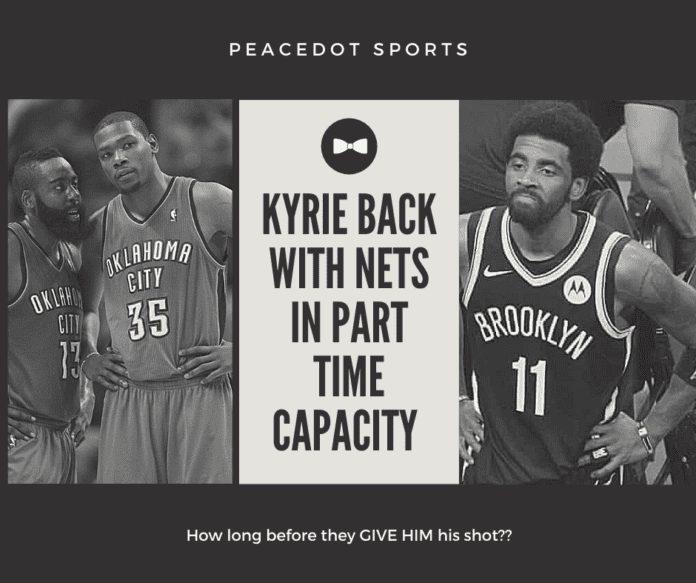 Kyrie Irving’s return to the Brooklyn Nets without getting the vaccine will prove to be a mistake. An NBA team competing at the highest level needs to develop team chemistry.

The best teams always have a sixth sense for their teammates and what they’re going to do or what they want to do, where they want the ball. Their strengths and weaknesses. Let’s find out if this decision by the Nets was a good choice or not. LET’S GO.

Kyrie Irving hasn’t played all season because of his refusal to receive the Covid-19 vaccine. The main issue wasn’t the Nets not letting him play. It was a decision made that was based on local vaccine mandates passed only in New York City and San Francisco. The players of these teams can’t play if they remain unvaccinated.

Visiting players to these cities don’t have to be vaccinated to play games under the local vaccine mandates but the players playing for those cities must be vaccinated.

Originally the Nets franchise refused to let Kyrie Irving play if he wasn’t going to get the Covid-19 vaccine injection. Injuries and the Corona Virus have taken a toll on Brooklyn, I’m not sure that there’s a franchise not heavily affected, anywhere, in any sport, across the entire world. For reference, I am referring to the round to ellipsoid shaped Earth, not Kyrie’s flat one. Kyrie Irving Brooklyn Nets Nike 2021/22 Swingman Jersey - City Edition - Navy
$129.99
Buy Now
We earn a commission if you make a purchase, at no additional cost to you.

Before the season began, there were daily Kyrie Irving news reports circling throughout the national media. The Nets weren’t going to let Kyrie Irving play because of the local vaccine mandate in New York City, not unless he was vaccinated and he refused. He is still in refusal of meeting the the mandate guidelines now.

A couple weeks ago based on a lack of players to play in games, the Nets front office said that Irving could return and play in the teams road games. Something they had vehemently said they wouldn’t do. Not until he was a “full-participant” to Brooklyn’s games and the plan to win a championship. A plan that at its core begins by making yourself eligible to help the club win.

Tonight Kyrie Irving news centered around his return to the NBA as the Brooklyn Nets faced the Indiana Pacers.

The Nets had lost four of their last six games and heading into Wednesday’s game, they were the eastern conference’s 2nd seed behind the Chicago Bulls at 23-12. Kyrie Irving had 22 points, 3 rebounds, 4 assists in the Brooklyn victory on January 5, 2022.

Any NBA team with championship aspirations MUST have chemistry. The only way to gain this experience is through playing together. Trial and error. Who remembers the 2011 Miami Heat?

In Kyrie’s circumstance, he will only be playing in the Nets away games. Some people might feel this is enough to create the chemistry needed for a team to compete on the games highest levels. It won’t be, unless what we’re comparing it to is Irving not playing at all.

What I’m comparing it to is the chemistry of other championship contenders.

If Kyrie Irving continues to decide to NOT get vaccinated, playing with “Uncle Drew” and then without him on repeat, this will lead the Brooklyn Nets to have a lack of cohesion as a team and especially in playing team defense.

This team could easily start to experience cohesion and unity after a six game road trip and then have to play without Irving for the next 3-4 games. Any chemistry formed with him will dissipate and vice versa.

Brooklyn Nets head coach Steve Nash says this isn’t an issue as long as the Nets keep it simple. I don’t buy that.

This looks like a mistake. A mistake before players like Kevin Durant turn to Kyrie and ask with anger and conviction “WHY DON’T YOU JUST GET THE FU***** VACCINATION, EVERYONE ELSE UNDER LOCAL VACCINE MANDATES CARES ENOUGH ABOUT THIS TEAM TO DO IT. WE’RE TRYING TO WIN A RING, JUST GET THE VACCINATION”.

How long does it take before a scenario like this happens and WHEN it does, Irving can’t just respond aloofly because it will be taken that he doesn’t really care that much about the team or winning a championship with them.

Which is how I see it too. If he cared he would do this one simple thing to ensure the best chance for the Brooklyn Nets’ title hopes. Breaking any dissension between himself and other players. It can’t be forgiven or forgotten if he isn’t putting the team first. THIS IS NONSENSICAL MADNESS. Ridiculousness.

He is literally forfeiting half of his salary to make it his reality and by being with the Nets, their reality as well.

Kyrie Irving’s return to the Brooklyn Nets will prove to be a mistake. An NBA team competing at the highest level needs team chemistry.

Allen Iverson Philadelphia 76ers Men's Red 1999-00 Reload Swingman Jersey
$115.00
Buy Now
We earn a commission if you make a purchase, at no additional cost to you.

Kyrie Irving couldn’t get away with this in any other sport without getting beat up at least once. Whether in the locker room, at practice, or while traveling. That being said he could still have an issue in the NBA. I know there are players on Brooklyn’s team that are very annoyed and pissed off at all this nonsense. Brooklyn is together to try and win a championship.

He decided to not play on a title contender that had a window of 2-4 years when they got together last season. Irving is almost 30-years-old and he’s the youngest of the Nets impact players currently under salary. Give him a shot?

If I’m Kevin Durant, I’m having Kyrie Irving held down in the locker room and administering a Covid-19 vaccine. It has to be Durant or Steve Nash that actually injects him though.

These guys are trying to win a championship and Irving is screwing them up by coming back under these conditions. The Nets can’t be a cohesive unit playing like this. IT’S NOT POSSIBLE.

There are retired players out there that could make an impact in a playoff run for a team. I bet Kevin Garnett could give a team 10 minutes-a game for 20-25 games.

The reason things like this don’t happen is that this messes up a teams cohesion and chemistry on both sides of the ball.

I wrote an article last year when Brooklyn acquired James Harden from the Houston Rockets and thought that it didn’t make the Nets a better team.

This diagnosis on the team was me personally taking my own evaluations for Kyrie and Harden and realizing quickly that they had two square pegs and one has to fit into the round hole. THIS COULD BECOME TROUBLESOME TO NAVIGATE OR FINESSE YOUR WAY THROUGH.

James Harden and Kyrie Irving don’t compliment each others games very well on either end of the court. Both need to dominate the ball to be effective and both have major flaws on the defensive end.

You just can’t outscore your opponent to winning a ring, doesn’t work like that. I don’t care how many scoring threats the Nets have either. There’s only one ball.

Mitchell & Ness Dominique Wilkins Atlanta Hawks NBA Throwback Jersey - Red
$150.00
Buy Now
We earn a commission if you make a purchase, at no additional cost to you.

What happens when the Nets have homeport and have to play in a game 7 or are down 3-2 in a series with home game next.

This is why I say at some point the Nets organization won’t be able to finesse there way through this minefield.

When the heat travels from the kitchen to the locker room, the whole thing is going to get burned down. Brooklyn’s fans, front office and players will all get burned.

I’m not sure its as much Kyrie’s fault as it is the organization for allowing this to happen. It took me a couple of minutes to realize what was going to happen. The Nets front office should stop kidding themselves before its too late.

Kyrie’s acting like a punk and this needs to be addressed, if I was KD, its getting addressed quick fast too.

“Hold his ass down and hand me the Covid vaccine, let’s go.”