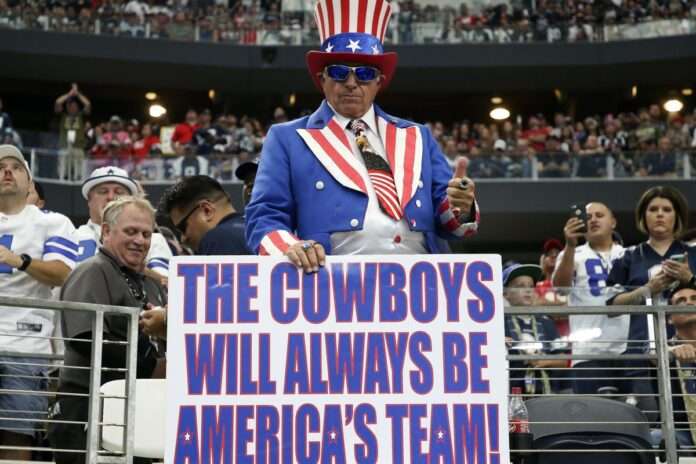 “America’s team comes from the teams 1978 NFL Films highlight film. This is its origin. Someone wrote a script just like many other NFL Films team yearbooks of the time like “Autumn Wind”.

John Facenda read the script, that was written over music and NFL highlights. Facenda’s was the first voice calling Dallas “America’s Team”. IT WAS JUST A SCRIPT, THERE WAS NO NATIONAL CENSUS ON AMERICA’S FAVORITE FOOTBALL TEAM.

The main difference is that the Raiders franchise doesn’t claim to have created Autumn or its wind.

Many NFL fans remember the 1974 Raiders NFL Films highlight video too. It starts with this poem

The Autumn Wind is a pirate
Blustering in from sea,
With a rollicking song, he sweeps along,
Swaggering boisterously.

His face is weather beaten.
He wears a hooded sash,
With a silver hat about his head,
And a bristling black mustache.

He growls as he storms the country,
A villain big and bold.
And the trees all shake and quiver and quake,
As he robs them of their gold.

The Autumn Wind is a raider,
Pillaging just for fun.
He’ll knock you ’round and upside down,
And laugh when he’s conquered and won.

Philadelphia is the nations first capital and a major city in America. The “Alpha”, Philly doesn’t consider the Cowboys “America’s Team”.

Since Andy Reid’s 2nd season in 2000, the Cowboys haven’t done much against the Eagles. By the way, Dallas, the Eagles haven’t won one championship, they’ve won four.

They have been the champions of the NFL four times. It counts the same if you win the NFL championship game or the Super Bowl. The winners of both games are NFL champions.

When you think of the United States of America, you can’t not think of New York, California, and/or the nations current capital, Washington D.C.

None of these places recongnize the Cowboys as “America’s Team”. Just watch this video, it’s like this.

After the Houston Oilers moved to Tennessee, the wheels started to bring in a new franchise, the Houston Texans. If everyone in Texas thought the Cowboys were “America’s Team” billionaires wouldn’t have seen dollar signs at the prospect of bringing another franchise to Texas.

The Texans had a more successful franchise over the last 10-12 seasons than Dallas has too.

If Philly, New York, California, Washington, New England (not just Boston) and some of Texas don’t consider the Cowboys “America’s Team”, WHO ACTUALLY DOES.

The Autumn Wind is a Pirate but the Cowboy is a liar, lacking verity, a trickster spewing falsity, trying to convince a nation, what even some of his neighbors think is a falsehood.

The Dallas Cowboy is a Liar. GET FACENDA ON THAT SH**. FLY EAGLES FLY.