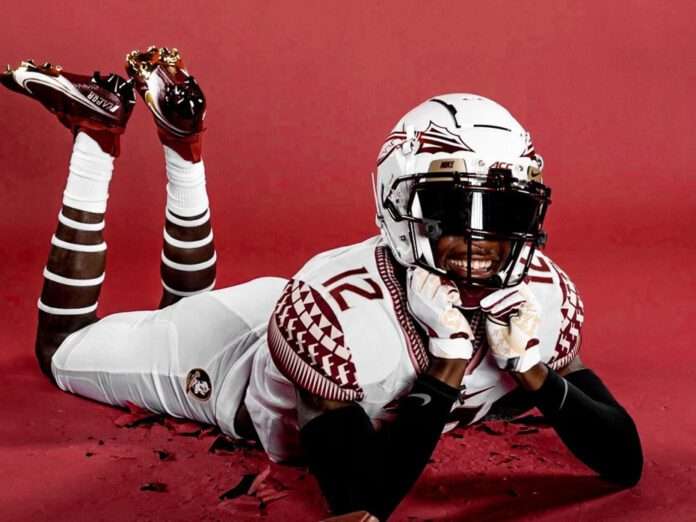 Travis Hunter breaks away from the Noles and D-1 football for HSBU, Jackson State. I wrote an article a few months ago, where I took Travis Hunter’s words as if they were coming from a person who didn’t lack integrity.

Maybe he’s just a stupid kid and I’m being too harsh.

Does Travis Hunter understand he isn’t playing Division 1 football. Does he understand at Jackson State he will be facing inferior competition.

Did Travis stop to think that his future teammates at Jackson State would go to Florida State in a heartbeat, if they were offered a scholarship.

In 2010, when LeBron James decided to take his talents elsewhere, he didn’t take them to the EuroLeague.

After playing inferior talent for three years will Hunter turn down the NFL to go to Canada or the Arena League?

It’s obvious, this kid is a piece of trash, not for changing his commitment from Florida State but going on camera and not being embarrassed.

He didn’t have to be ashamed of himself but he should’ve been somewhat embarrassed after all his talk of loyalty and commitment.

Instead he treated the Noles hat with complete disrespect. I know Deion Sanders didn’t tell him to act-a-fool.

Someone ask Deion Sanders if he would have decided to NOT play FBS Football when he was playing.

Hell, never mind his playing career, when Deion Sanders gets offered a Division 1 head coaching job is he staying at Jackson State?

Travis Hunter said a few months ago that FSU was like home. I guess he decided he wanted to leave home and not have to be challenged much in collegiate football.

Some of the things he said actually makes me question this young man’s mental standing. Is he a piece of s***, too young mentally or is there a mental health issue here?

Why did he go saying the things he said. If there was a chance of him not coming to Tallahassee, why say

Travis did a Sports Illustrated piece in August, where he is talking about other programs recruiting him.

I’M NOT BUDGING. I DON’T REALLY SAY TOO MUCH, I’M LOCKED INTO FLORIDA STATE. I’M NOT FOCUSED ON NO OTHER SCHOOLS. AIN’T NOBODY GOING TO BE ABLE TO CHANGE MY MINDSET”

This is the same interview where he says he tells other recruits that FSU is home. “It feels like home”.

Name, image, and likeness = $$ for Travis Hunter. More money in the short term because if there are any questions about Hunter’s makeup in any way, he will lose millions on his first NFL contract.

In all phases of life and sport. You will be a better fighter the better your sparring partners are. A better rapper, if the rappers you battle are of a high caliber.

Even if they crush you at first, when you finally get the best of them, you will know you needed them to take your game to the next level.

You need to test yourself against top talent to push yourself to the next level of greatness. It’s why it takes rookies a minute usually to show greatness, if they possess it.

There is a learning curve, just like in anything.

When Deion gets offered a Division 1 job, he will accept it because he wants to be measured against the best, at the highest level.