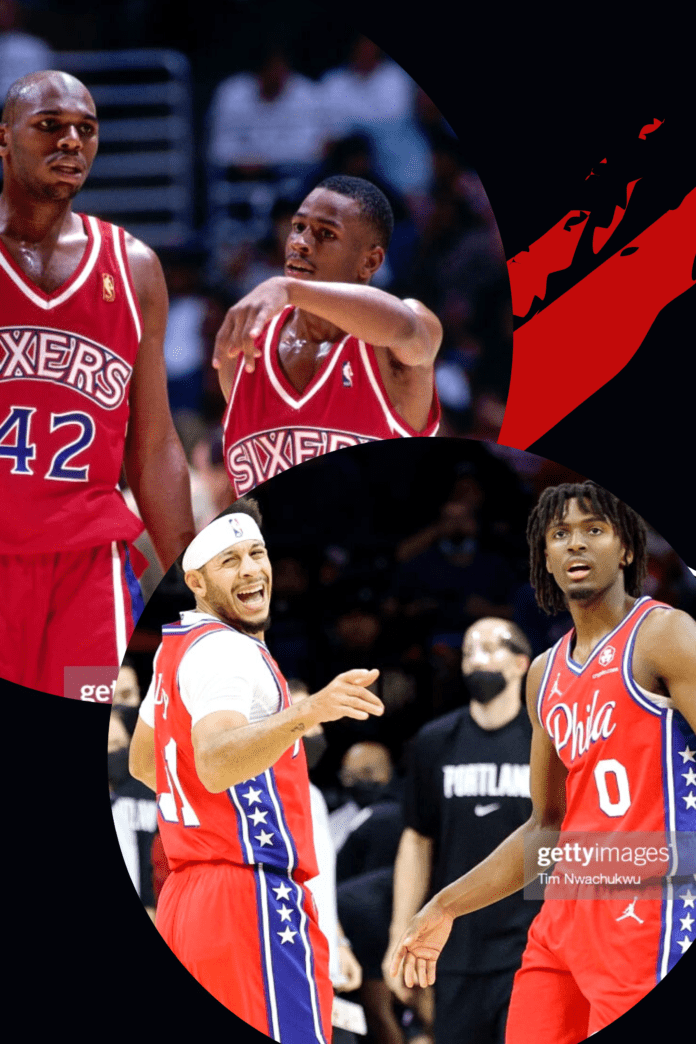 Tyrese Maxey has taken his game to another level but what about the issues the Sixers face from Maxey’s emergence to possible NBA All-Star.

Reaching for the Maximum Maxey

Tyrese Maxey was drafted by the Sixers with the the 21st pick of the 2020 NBA Draft. The 6’2 guard played college basketball at the University of Kentucky for one season in 2019-20. He was a five star recruit and a top 10 overall recruit nationally by recruiting services like Rivals and 247 Sports. He was a big time blue chip prospect coming out of high school in Texas.

Tyrese’s father Tyrone Maxey was a part of the SMU staff but Kentucky Wildcats coach John Calipari was to convince the class of 2019 top ranked guard to play his ball in Lexington, Kentucky.

The Dallas Morning News named Maxey the men’s basketball player-of-the-year in 2018 as a Junior.

He was a member of the United States team at the 2018 FIBA under-18 Americas championships too. Tyrese Maxey Philadelphia 76ers Fanatics Branded 2020/21 Fast Break Replica Jersey - Icon Edition - Royal
$74.99
Buy Now
We earn a commission if you make a purchase, at no additional cost to you.

Tyrese Maxey has made an astronomical leap from his rookie season to year two in the NBA. A jump that almost nobody saw coming. Maxey has been an elite slasher to the basket since his days in Garland, Texas. He Played at South Garland High School.

Everybody knew that Tyrese Maxey had elite quickness and speed but nobody expected him to polish his game at 21-years-old, entering his 2nd season.

He has greatly improved his shooting, which still needs work but it’s day and night from before. We expect talent to improve with seasoning and hard work but not usually this quickly.

There have been many comparisons recently comparing Tyrese Maxey’s play with the Sixers in 2021-22 to Tony Parker.

We will see if Maxey is Parker-esque eventually but I don’t know if Parker would’ve reached the ceiling he did with his talent, if he wasn’t playing for Spurs head coach Gregg Popovich or with the talented teammates that he had with the San Antonio Spurs.

What the French point guard brought to the Spurs, especially in 2007 & 2014 was the ability to put the ball on the floor and penetrate. The Spurs needed this, it made them a complete team, void of weakness.

Maxey like Parker excels at penetrating defenses and even has the same signature floater as Tony did. Using it just as effectively. This is a shot that for most players is an extremely tough shot to make.

Both stand at 6’2 and dance through holes in the defense, many times off balance as they score at the net. It should be noted just because the Sixers Sophomore is like Tony Parker doesn’t mean that he will have the same team success. The Sixers floundered throughout the 1990’s after trading Charles Barkley to the Phoenix Suns. In the 1995 draft, the Sixers selected Jerry Stackhouse out of North Carolina and the future of the 76ers belonged to Stackhouse.

He was the first Answer that the Sixers replied to the questions about the future of the franchise. He averaged 19.2 points-per-game as a rookie and 20.7 PPG in his second campaign.

Many people thought of Stackhouse as the next Michael Jordan but the Sixers had the top overall selection in the 1996 NBA Draft and there was quickly a new answer to Philadelphia’s questions about its basketball team.

When the Sixers selected Allen Iverson with that 1st overall pick, many thought that the Sixers would have the best backcourt in the NBA in short term.

The hype intensified when Iverson showed out as the 1997 NBA Rookie-of-the-Year. The truth was this was never going to work. When Larry Brown became the Sixers head coach Stackhouse was shipped off to Detroit for Theo Ratliff, Aaron McKie, and a 1st round draft pick.

Philly fans thought this was awful and Brown was going senile. What was he thinking?

Autographed/Signed Julius Erving Dr. J Philadelphia 76ers Sixers Red Basketball Jersey JSA COA Buy Now
We earn a commission if you make a purchase, at no additional cost to you.

The truth was this was never going to work because both men were bad defenders and turnover prone. One of these guys had to go for even the chance of success and winning.

Seth Curry is having his best season as a scorer in 2021-22 but Tyrese Maxey and Seth Curry can’t start together in the same backcourt.

First off the two aren’t tall enough and maybe if they were good defenders this could be somewhat overlooked but probably not.

The size is an issue in the postseason and the fact that neither player is a good defender means they can’t play together for extended minutes.

There is no chance at success attempting this. It’s NBA 101. They’ll be exploited in a playoff series.

Tyrese Maxey on defense doesn’t have great awareness and gambles too often. He tries very hard but he lacks the awareness and sometimes just completely overplays the ball or his man.

Maxey plays with his hands too much, which leads to guys driving by him. He is just getting blown up by screens on a regular basis too.

The answer for this massive problem is simple but not always easy for a team in this situation to make a reality.

The Sixers need a big guard, who excels at defense. Do the Sixers have anyone like this?

By the way in this backcourt, Ben Simmons is the point guard. Maxey protects the ball well for a ball handler who isn’t really a playmaker but Simmons s is a playmaker.

He is a ELITE at this. Yes, ELITE. The only thing to gameplay for more defensively against the Sixers, than Simmons pushing the ball is Joel Embiid in general.

If Simmons isn’t slowed down, he will just kill you. The way he killed the Washington Wizards in the first round last season.