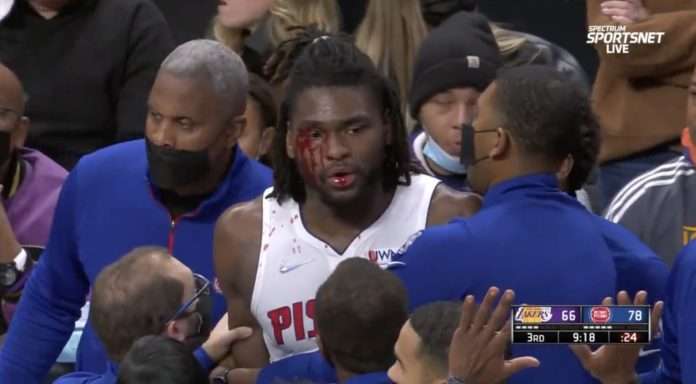 A brief look at how LeBron’s heart pumps Kool-Aid in Detroit Altercation. No excuse for such softness really.

This video from the stands shows that during Isaiah Stewart’s final push towards LeBron James, the one where he broke like seven tackles, “the King of pumping Kool-Aid was running away. He didn’t want any of this man.

LeBron couldn’t back it up fast enough. I wouldn’t have been surprised if need be that he ran into the stands. No, that probably wouldn’t be necessary because he was going to have Russell Westbrook fight him. instead.

A man that is bigger than Russ is but about the same size as LeBron James. PATHETIC.

LeBron James was about to pull a Ron Artest at the Palace. Running up into the Detroit crowd to escape out of fear, instead of fighting cause of a beer.

Bron was on some real scary sh**. First off many are reporting that James accidentally hit Isaiah Stewart with an elbow, this is inaccurate. He turned and punched him and then got real scared. REAL, REAL SCARED.

This is just embarrassing, Westbrook is much smaller than James is. He shouldn’t have to defend and protect Bron’s scared ass.

A man is charging towards you

LeBron James had Isaiah Stewart charging him and all he could do was back it up with Stewart was breaking tackles, trying to get at him. This is embarrassing. I’m sure there will be people who say “There wasn’t a reason for LeBron to fight”.

When a grown man is trying to get at you in this manner, this is all the reason any man with pride needs to engage. What Isaiah Stewart was doing was more than enough cause for James to defend himself, literally and figuratively.

Instead he was hiding behind teammates, referees and other team and NBA personal. WEAK AS SH**. A REAL BITCH MOVE BRON. He goes by “King James” or “Bitch move Bron” AKA “BMB”. Michael Jordan would’ve kicked your Kool-Aid pumping ass.

Westbrook was ready to go

Taking back to grade school

I’ve been locked up and instigated fights in jail where I knew my best case scenario was getting jumped by his gang buddies. They had to jump in when he started losing. I was good with that and considered it a win, So I don’t understand LeBron James’ softness.

The only reason is everyone is going to think you’re a punk if you don’t show up and fight. THIS WAS WORSE THAN THAN. THIS MAN WAS KNOCKING OVER OTHER GROWN MEN IN AN ATTEMPT TO GET AT JAMES.

In trying to reach out to LeBron we couldn’t get a comment but he waved to our photographers.