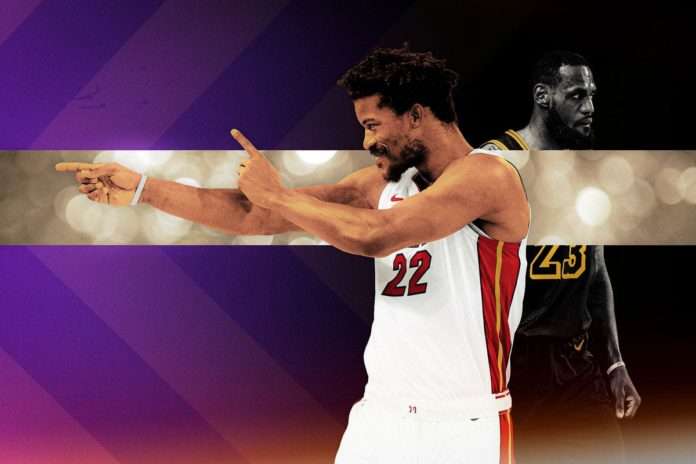 Jimmy Butler still doesn’t seem to get the proper respect. Regardless of his five NBA All-Star games. Jimmy Butler’s playoff stats show that he has been clutch and intrical to the Miami Heat coming out of the Eastern Conference during the NBA Playoffs to play the Los Angeles Lakers in the NBA Finals.

Jimmy Butler went Oscar Robertson twice leading the Miami Heat into game 6 of the 2020 NBA Finals. Will his legendary work lead to a Miami Heat title? Jimmy seems to think it will. Butler was very adamant that the Heat were going to win the championship since they were down 2-0 leading into game 3.

I’ve stated in past articles that Jimmy Butler is a very underrated player who wasn’t great in any one aspect of his game but good in all aspects. Butler doesn’t have any weaknesses. He can shoot, rebound, defend, pass, drive, he’s a leader, and he’s tough. Jimmy Butler is very tough.

I had a couple people challenge this by stating Jimmy couldn’t shoot. “He was a bad shooter” they said. I just came back with ” Jimmy’s a bad shooter”? “I don’t ever hear anyone say why’s he shooting the ball”.

There won’t be anymore conversations like that moving forward after the 2020 MNA Finals.

“Jimmy Buckets” had 40 points, 11 rebounds, 13 assists, 2 blk, 2 stl triple double performance in game 3 of the NBA. Finals . The performance was one of legends. The media and fans said it was the game of his career. Giving credit to the Miami Heat Forward but almost dismissing it at the same time as if it couldn’t happen again.

Most of these people already had crowned LeBron James and his Lakers as champions as this performance of Butler’s wasn’t going to halt the coming crowning of the King. Only three games in, but the reaction was the same as it was prior to the game, expecting the Lakers to win game 3 en route to a sweep of the Heat. This was the pre-coronation of King James and it’s still happening now.

Oops he F’d around and did it again

Jimmy Butler re-ran his legendary act in game 5. The performance in game 3 was almost drawn up as luck.

What does that make the 35 points, 12 rebounds, 11 assists and 5 steals triple double that Butler had in game 5?

Undeniable providence? Jimmy came here to win a title. He thought he was leaving the bubble with a championship since the day he arrived in Orlando.

If he does prove to be prophetic, don’t place the blame on LeBron or Anthony Davis. Faith was placed in crowning the Lakers prematurely. The pre-coronation really started before game 1 ended. The Lakers will probably win the series because they are the more talented team bit to just dismiss Jimmy Butler’s playoff stats and the Miami Heat is ridiculous. Dwyane Wade Marquette Golden Eagles Fanatics Authentic Autographed Retro Brand Jersey - Navy
$499.99
Buy Now
We earn a commission if you make a purchase, at no additional cost to you.

Don’t forget Jimmy Buckets kept telling you to “kill that noise”, “it’s the first team to win 4 games”. Then he let you know that he was going to be on that winning team.

You probably found it funny after game 2. After the third game, you gave Butler props for his legendary performance but considered it luck and not repeatable.

Game 4 saw your world restored to order but then in game 5 there was a glitch in the Matrix. What does the final scenes of the 2020 NBA Finals have in store for Jimmy Butler and the Miami Heat.

Before Jimmy Butler was putting up stats in the NBA he was attending Tomball High School in Tomball, Texas.

I mentioned earlier that Jimmy was very tough, his mother kicked him out of the house when he was 13-years-old.

Telling him, “I don’t like the look of you, you gotta go”. He bounced around staying with friends. A few weeks here, a few weeks there before looking for his next resting stop.

Jimmy finally met a kid from his School, Jordan Leslie and began staying with with his mother, step-father and the seven children that the family had between them

Butler calls them family and later said “They accepted me into their family and it wasn’t because of basketball”.

After all that he still talks to his parents stating “I don’t hold grudges, I still talk to my family. My mom. My father. We love each other, that’s never going to change.”

“Jimmy Buckets” averaged 10 points-per-game at Tomball High School. As a Senior, Jimmy Butler’s stats would read 19.9 points-per-game and 8.7 rebounds. He was the team captain and voted the team’s MVP after the season.

Despite having a very good Senior season, he wasn’t heavily recruited and went to Tyler Junior College in Tyler, Texas.

At Tyler Junior College, Butler averaged 18.1 points-per-game, 7.7 rebounds, 3.1 assists He was scouted by recruiting services at this point.

247 Sports rated Butler as a 2 star recruit and ranked him as the 127th best Junior College prospect in 2008.

Butler accepted a scholarship to Marquette University in Milwaukee, Wisconsin. In his first season, Jimmy Butler’s stats were a pedestrian 5.6 PPG and 3.9 rebounds.

In his final two seasons he was an All-Big East Honorable Mention. He was Added to the starting lineup before his Junior season. Averaging 14.7 PPG, 6.4 rebounds, and 1.3 steals during the 2009-10 season. Jimmy Butler Marquette Golden Eagles Original Retro Brand Alumni Basketball Jersey - White
$119.99
Buy Now
We earn a commission if you make a purchase, at no additional cost to you.

Jimmy Butler’s stats improved each of his first 4 seasons with the Chicago Bulls. In 2014-15, he led the league in minutes, made it to his first All-star game and won the NBA’s Most Improved Player Award.

He beat out Klay Thompson, Draymond Green, and Rudy Gobert to win the award.

Every season he improved and became more of a leader and displayed more of his toughness. Whenever Jimmy Butler was traded he would bring a level of toughness to his new team. Even if this isn’t what they were looking for.

On January 3rd, 2016, Jimmy broke Michael Jordan’s record of points in a half for the Bulls by scoring 40 of his 42 points in the 2nd half.

Jimmy Butler was traded to the Minnesota Timberwolves on June 22, 2017. He led the Wolves to their first playoff appearance since the 2004 season, when Kevin Garnett was the NBA MVP. They haven’t been back to the playoffs since then either.

This isn’t what Jimmy will be remembered for in his time playing for Minnesota.

Butler thought much of the young Timberwolves players were soft, especially the 1st pick of the 2014 NBA Draft, Karl Anthony-Towns.

One practice in particular was reminiscent of Kobe Bryant’s “Charmin Soft” practice with the Lakers a few years earlier.

Butler was heard yelling in Layden’s direction “You (bleeping need me. You can’t win without me”.

He then played with the 3rd string players and they beat the starters during practice in a scrimmage.

Jimmy Butler was traded to the Philadelphia 76ers during the 2018-19 season and brought quite a bit of toughness to Philly.

Philly got off to a huge lead in game 2 of the 2019 Eastern Conference Finals with The Sixers trailing the Toronto Raptors 1-0 in the series.

The Sixers had a 19-point lead in the 2nd quarter of game 2, the Raptors cut it to within a basket more than once. PhillyÃƒÂ¢Ã¢â€šÂ¬Ã¢â€žÂ¢s players seemed shell shocked and their body language as a whole screamed beaten.

That is all except one player. One player played with all the toughness and heart you can hope for as a fan. He didnÃƒÂ¢Ã¢â€šÂ¬Ã¢â€žÂ¢t care what Toronto did because he wasnÃƒÂ¢Ã¢â€šÂ¬Ã¢â€žÂ¢t going to let them take the lead. Not in this game. Every time the Raptors came close, Jimmy Butler answered back.

Kawhi Leonard eventually hit the now famous buzzer beating three pointer in game 7 as the Toronto Raptors moved on to the Eastern Conference Finals and eventually an NBA championship.

Your look will reflect your fandom when you put on this Miami Heat Jimmy Butler Swingman Player jersey from Nike. The classic Association design features official team graphics with your favorite player’s name and number for an authentic look on game day. Plus, moisture-wicking Dri-FIT technology helps keep the breathable fabric feeling dry and comfortable to wear.

Charles Barkley USA Olympics (1992 Dream Team) Signed White Jersey JSA - Autographed NBA Jerseys
Buy Now
We earn a commission if you make a purchase, at no additional cost to you.