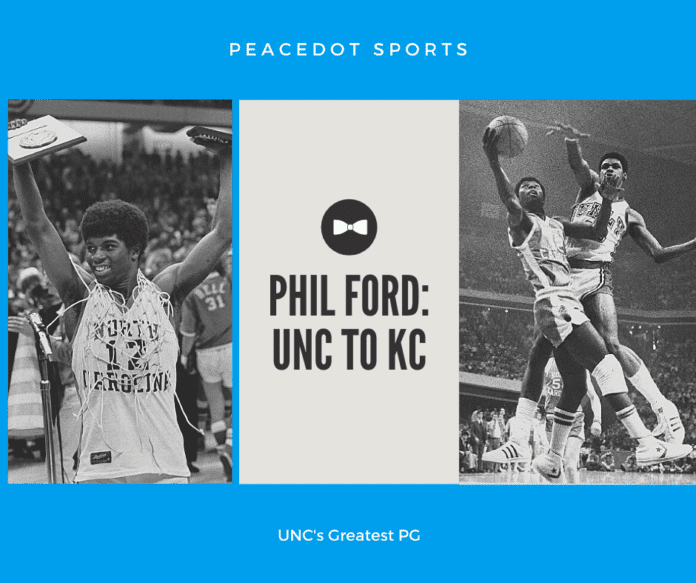 Phil Ford from Carolina’s four corners to Kansas City delves into the Tar Heels greatest point guard from Chapel Hill to the 1978 NBA Draft and beyond.

Ford was good for an extra 17 wins with his presence in K.C as a rookie. The following season, K.C won 47 games and they made a cinderella appearance to the Western Conference Finals in 1980-81.

Phil Ford is the first freshman to start for legendary UNC head coach Dean Smith at Chapel Hill. The blue chip point guard was a High School Parade All-American out of Rocky Mount High School in Rocky Mount, North Carolina. He says he was Head Coach eanSmith’s to lose in recruiting.

Meaning he wanted to play for the North Carolina Tar Heels. Something would’ve had to go wrong for him to consider other college basketball programs.

Ford had a great freshman season for the Heels, he averaged 16.4 points-per-game and 5.2 assists. These were both UNC freshman records that stood for over 20 years.

The N.C State Wolfpack and David Thompson defeated UCLA in the 1974 Final Four en route to a National Championship. The Wolfpack went 27-0 in 1972-73 too.

Phil Ford’s freshman year at Chapel Hill was also David Skywalker’s Senior season at N.C State. Thompson led the ACC tournament in scoring with 84 points and Ford was right behind him with 78 points.

This is if course back when to make the NCAA Tournament, winning your conference tournament was important because only 32 teams qualified for March Madness. North Carolina entered the Greensboro Coliseum the 2nd seed and found themselves trailing by 8 points to 7th seeded Wake Forest with 50 seconds remaining in the game. UNC tied the game in regulation and won it in overtime.

In the next round they found themselves in overtime again, this time vs the Clemson Tigers. The Heels pulled this game out too.

The Carolina Tar Heels point guard led his team to a First Place ACC Regular Season Finish in the 1975-76 season.

The great college point guard in Chapel Hill was selected as a First Team All-ACC selection after his sophomore season, an honor he would receive in his Junior and Senior seasons too. He was a Second Team Consensus All-American as a Sophomore as well.

Ford scored 26 points to propel UNC past Virginia in the ACC Final and lock down another conference championship.

This was the best Carolina team that Phil Ford played on. In my opinion, the 1976-77 North Carolina Tar Heels are the greatest Tar Heels team to not win a national championship.

Injuries to teammates, Walter Davis and Tommy LeGarde, as well as Ford himself, prevented this very talented UNC team from cutting down the nets in March 1977.

The nail in the coffin happened when Ford hyperextended his elbow in a regional semi-final vs. Notre Dame. He came back to play and Carolina advanced to the Final Four and the national championship game but Phil couldn’t even lift his arm above his head. So being effective wasn’t something that was probable.

Ford was named a First Team Consensus All-American in 1977

The Carolina superstar averaged 20.8 points-per-game and 5.7 assists-per-game as a Senior.

He scored his career-high 34 points in his final home game, a victory against rival Duke to clinch another ACC First Place Finish.

At the end of the season, Ford was selected to another First Team Consensus All-American Team and was honored as the 1978 National Player-of-the-Year.

Phil Ford is associated with the Four Corners offense like Magic Johnson is the fast break. The four corners was originally designed so teams could to stall and burn clock in the pre-shot clock era.

The way Dean Smith and Phil Ford ran the four corners at North Carolina was different though. It was Ford dodging and weaving into the lane, changing speeds and when he wasn’t directly causing opposing defenses fits in the last few minutes, he was finding his teammates for easy baskets.

While the defense was entranced with the UNC point guard, he would leave the ball for his teammates, leading to easy scores. Phil would break down his defender and instead of shooting, he’d bring it back out, rinse and repeat.

The Tar Heels won some part of the ACC each season Ford was on campus (1974-78). In 1977, Carolina was the ACC regular season and conference tournament champions. If you’re going to wear a Carolina jersey, why not get this Phil Ford Carolina Blue authentic jersey from Fanatics.com.

North Carolina are known for their point guards, why not represent the team with the greatest player to do it at the PG position on your back.

The 1977 Carolina team is the most talented team to not win a National Championship. UNC was struck by injuries starting with big man Tommy LeGarde at a team practice in January. They were so talented that they fought past losing their center but as March Madness came around, injuries spiraled and it ended up hurting the team.

This didn’t stop a Tar Heels team with seven future NBA players. Four top 10 picks and back-to-back NBA Rookies-of-the-year in the backcourt with Walter Davis and Ford winning the award consecutive seasons in 1978 and 1979.

The Heels lost in the 1977 NCAA Final to Marquette. The team rallied through the Final Four, even after Walter Davis broke a finger on his shooting hand that caused him to miss the first NCAA Tournament game. UNC won against Purdue 69-66, behind 27 point from Ford.

In the Regional Semifinals vs Notre Dame, Phil Ford hyperextended his shooting elbow. He played through it but he couldn’t even lift his arm above his head, rendering him ineffective for the remainder of the season.

Back to Kansas City

On February 21, 1979, the Kings defeated the Milwaukee Bucks and Ford tallied 26 points, 22 assists, 5 steals. The 22 assists tied Oscar Robertson for the franchise record and the number still stands today.

Phil Ford had two 20+ assist games in a three day span as an NBA rookie. He won the Rookie-of-the-year in a landslide, garnering 62 of the 66 first place votes

In February 1981 World B. Free accidentally poked Phil Ford in his eye causing a broken orbital bone. Free’s thumb went into Ford’s eye The incident that affected Phil’s vision was so forceful that Free dislocated his thumb.

Phil was never the same again. It was a mixture of issues, bad timing and being in the wrong situation.

Phil Ford will always be the best point guard in the ACC to North Carolina fans and one of the top 5 to ever play college basketball. He went on to become an assistant coach in college and the NBA.

He will always be remembered for how he ran the four corners for Dean Smith and his 360-degree spinning layup. The best 360 spinning layup in basketball history.

Michael Jordan is the greatest shooting guard in Tar Heels history and Phil Ford is its greatest point guard. Everything else is subjective.