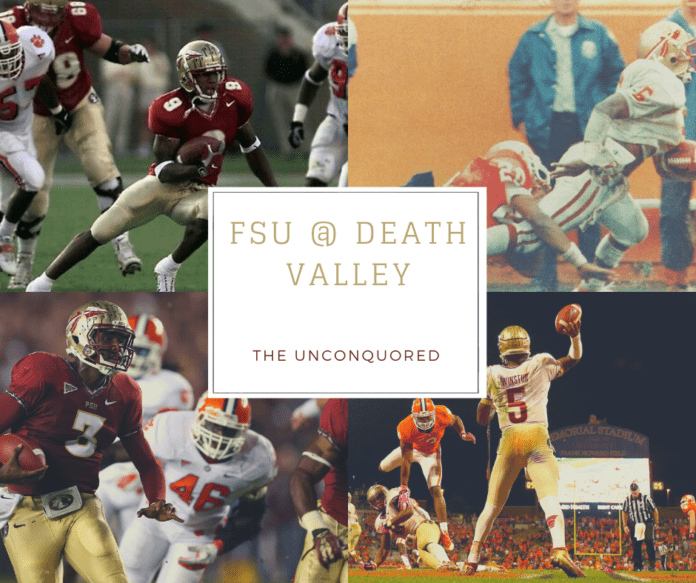 FSU vs Clemson. Coach Mike Norvell heads into Death Valley in 2021 after all the nonsense with covid in 2020.

The Florida State Seminoles at Death Valley, an unconquered story. When I first started my website I was messing around and had a post with just a few images. I was just trying some things but the day before the FSU – Clemson game at Death Valley in 2021 I’ve elaborated using actual words.

The reason I’m doing this is because Clemson fans are really just assholes who don’t know how to act and I live in Philadelphia so that’s saying something.

Florida State and Clemson have met 33 times on the gridiron. Despite losing the last five matchups, the Noles lead the all-time series 20-13.

Many Clemson fans will ignore this but it stills means before 2015 it was 20-8 in favor of Florida State. In the meetings where both teams were considered realistic title contenders FSU defeated Clemson every time.

FSU-Clemson have met three times with both teams ranked in the top 10 and the Noles have won each of these contests.

The Clemson Tigers do have more wins than the Noles all-time. The Tigers have 752 wins to FSU’s 531.

I’m sure many Clemson fans will tell you this is because they’re a better program but really it’s just because Clemson has played 120 seasons compared to Florida State’s 68 years of football.

If you give the Seminoles only 5 wins a season for 52 years on top of what they have now, so both programs played the same amount of seasons, FSU would have 791 victories. 39 more than Clemson. Only 5 wins per season.

Shut the hell up Clemson before we bring Jameis back to gag Dabo in a dark corner, next to the Sod Cemetery.

Walking around with DeShaun Watson afterwards talking bout my neck stiff, who wants to give me a rub down. Silly Fa****.

“If we gone do it then

We gone do it big then”

Dabo Swinney you need to learn how to act. Going on and on and on like the battery bunny is a bad look.

If the Noles were undefeated then all the ducking comments might give creedence to your three week babbling tour.

I’ll say it, yes Dabo you would have won in 2020, who cares, why would FSU duck you? Nobody expected FSU to hang within 3 touchdowns and that’s rounding down. DUCK YOU DABO.

“We’re not doctors, not trying to be a doctor,” Swinney said. “I just listened to the doctors, you know, so, you know, listen I’m not really worried much about what they say down here in Tallahassee, that’s for sure. I’ve been in this league for 18 years, been head coach here 12 years, I think they’ve had three head coaches in the last four years. So decisions that they may, I’m not gonna worry about advice from Tallahassee. I trust the people here, and trust our doctors, 100%. “

I think Dabo is still sore about 2013. YOU KNOW WHAT CLEMSON FANS, WE NEVER MESSED WITH YOU WHEN YOU WERE DOWN.

THE GATORS DON’T EVEN DO THIS NONSENSE AND WE DIDN’T DO IT TO THEM. WE WENT INTO GAINESVILLE AND JUST HANDLED BUSINESS.

The Clemson Tigers had the bright idea to try and set the record for outdoor crowd noise during the 2013 FSU vs Clemson game.

ÃƒÂ¢Ã¢â€šÂ¬Ã…â€œWe have seen numbers approaching the World Record previously, but with the magnitude of this game, the size of the crowd and the passion of Clemson fans, thereÃƒÂ¢Ã¢â€šÂ¬Ã¢â€žÂ¢s little doubt we will be able to set a new record,ÃƒÂ¢Ã¢â€šÂ¬Ã‚Â

OH YEAH REALLY. IS THAT A FACT, WHAT DID THE DOCTORS SAY?

This isn’t what occurred. There was much doubt of this happening because Doin it BIG Y’ALL.

I mean if we gonna do it, might as well do it BIG.

The Fans over there

I know this doesn’t pertain to all Clemson fans but I had some tell me that it was over for Florida State on twitter.

Obviously there are people that haven’t been watching college football for very long or they’d know better but still this is only a thing because of the head coach running his mouth. Here were my answers last year.

In 1988, the 10th ranked Noles defeated 3d ranked Clemson 24-21 with LeRoy Butler and the Puntrooskie.

In the 1999 matchup, Warrick had 11 catches for 121 yards as the Noles comeback from a 14-3 first half deficit to give coach Bobby Bowden his 300th career victory and keep FSU undefeated en route to the programs 2nd national championship.

The 4th ranked Seminoles beat the 10th ranked Tigers in 2012 on the strength of E.J Manuel’s arm and legs.

We already covered the 2013 meeting between FSU-Clemson. This was the highest ranked game between both schools heading into Death Valley where the Clemson campus wanted to set the Guinness world record for outdoor crowd noise and assumed they easily would.

The 5th ranked Noles defeated the 3rd ranked Clemson Tigers 51-14 on FSU’s road to a perfect record and a 3rd national championship. The Clemson fans never managed to make enough noise because Jameis Winston and the Seminoles silenced them very early on in the game.