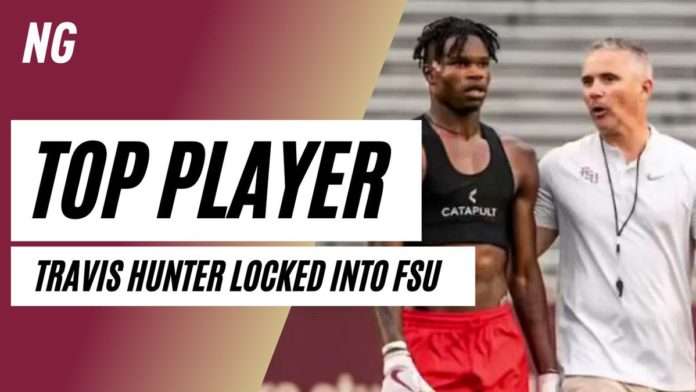 Mike Norvell’s future, FSU recruiting, and Travis Hunter. There are fans that want Norvell fired because of his 0-4 record but should we hit the pause button on that for now?

Some fans are skeptical

Some fans are beginning to show signs of skepticism in regards to Florida State head football coach Mike Norvell. The Noles have started 2021 with an 0-4 record. So what does this mean?

Here’s the thing, FSU football’s overall talent level in 2021 is probably the worst it’s been since the 1970’s. This team has one 5-star player on its roster in defensive back Akeem Dent.

The last of Jimbo Fisher’s recruits just left the program after the 2020 season. Marvin Wilson, Josh Kaindoh, Tamorrion Terry, Asante Samuel JR, and Hamsah Nasirildeen were some of these players.

It takes 3-4 recruiting classes ranked in the top 3-5 nationally to realistically compete for a college football championship. Alabama, Ohio State, and Clemson aren’t in the college football playoff almost every season because their coaches are better play callers than everyone else.

Don’t get me wrong you have to keep these kids in line and coach them up too. This is just as important. When Bobby Bowden got older this was something that was overlooked in Tallahassee and part of the problem.

You can’t let these kids run rampant because if you allow it, it will happen. At the start, none of this matters without the recruiting though. Coaches can coach up 2 & 3 star recruits and some could become top 10 NFL Draft picks. This is usually because they added size, they grew vertically, or changed positions.

If your coaching up a team of 3 star recruits and no one is as talented as you at coaching these kids up, in the end, you aren’t winning National Championships.

Coaches like Nick Saban are coaching their players up too but his players are 5-star prospects. He wins by 50 points against teams with 5-star recruits and 4-star recruits. So what is he going to do against a team whose majority of players are 3 star players?

I knew this season would be the worst one. I’ve talked about it in the past. This is when everything that happened in Tallahassee with Willie Taggart would come full circle with FSU football recruiting.

When a program starts to recruit well with top 5 classes, it doesn’t take affect that next season. This isn’t college basketball. Most true freshman don’t make an impact nationally. When they do its few and far between. A whole team of freshman aren’t doing anything but gaining much needed experience.

You should expect a top recruit to really take his game to that next level in the 2nd half of his sophomore season.

This is the opposite of that

The opposite of great FSU recruiting is happening in 2021. During Willie Taggart’s tenure and in the first season under Mike Norvell, Florida State still had future NFL players that were originally recruited by Jimbo Fisher.

Just as it takes a couple of years to reap the benefits of great recruiting, the below mediocre recruiting of Willie Taggart is completely on display for the first time in 2021, alone in the spotlight.

Is Mike Norvell the right coach

Noles fans are beginning to question if Mike Norvell is the right head coach to lead the Noles into the future. I know a few things like in this last loss that took FSU to 0-4 vs Louisville, down 8 points, Norvell went for it on 4th and long within his own 30 yard line.

I hope this and other 4th down attempts that are needlessly reckless are only being attempted because of the teams bad record. By the way, the Noles converted this attempt but when your defense is playing good, why risk it.

Another issue is the 16 players that left the team during Norvell’s first season in Tallahassee. There are many reasons for this and even though some stated they left because of the new staff, not all have said that was the reason for their early departures.

Another troublesome issue is the rumor that was somewhat proven of Norvell and his staff lying about positive Covid tests and forced some of his players to even lie and delete tweets. This led to some of the Noles stating that they didn’t feel safe and quitting the team.

Maybe this was due to a new coach being overly eager to prove himself after getting his first opportunity at a big time program, while dealing with a crisis that didn’t have a playbook. He made some mistakes and then the whole program changed course and fixed the ship. Hopefully lessons were learned in this situation. Norvell, himself wound up contracting the virus.

Even if the Noles go winless but keep their recruits, Mike Norvell MUST and will keep his job. Many of the top recruits in the nation are still undecided and a player like Hunter could persuade others to join him on campus in Tallahassee.

Out of the top 10 recruits for 2022 based on Rivals.com’s rankings, 3 have verbally committed, Two of the undeclared players in the top 5 are from the state of Florida too. One from Fort Lauderdale and the other from Jacksonville.

Travis Hunter is the top overall college football recruit in America for 2022. He committed to the Florida State Seminoles back on March 3, 2020, proving that Mike Norvell’s FSU football recruiting tactics are headed in the right direction.

Hunter is a CB/WR that stands at 6’1 and 165 pounds. He is the highest CFB cornerback prospect EVER and the top WR in the class of 2022.

Travis Hunter was asked about the Seminoles 0-4 start and where this leaves him and his commitment to Florida State. His response was

Here is another quote made by Travis Hunter to Sports Illustrated in August. This was in reference to teams like the Florida Gators, Michigan Wolverines, Georgia Bulldogs, and LSU Tigers continuously making attempts to sway Hunter’s committment.

“I’m not budging. i don’t really say too much, I’m locked into Florida State. I’m not focused on no other schools. Ain’t nobody going to be able to change my mindset”.

The top prospect in the nation in the same Sports Illustrated article from August 3, 2021 said he has been actively trying to help in the FSU recruiting process, looking to help build on the top 10 class for 2022.

He tells other recruits that are considering FSU that Tallahassee is home. It feels like home.

In his first game of his Senior season at Collins Hill High School in Suwanee, Georgia, Hunter had 13 receptions for 232 yards and 2 touchdowns. He threw one touchdown pass and had an interception.

Hunter plans to play both sides of the ball when he hits campus at Florida State but it’s as a cornerback prospect that he is the highest ranked player of all-time.

Former Noles and NFL cornerback Bryant McFadden talked with Travis back in July.

Mike Norvell and his top FSU recruiting prospect Travis Hunter look to put the unconquered back into Florida State and we have to wait and see if this dream comes to fruition.