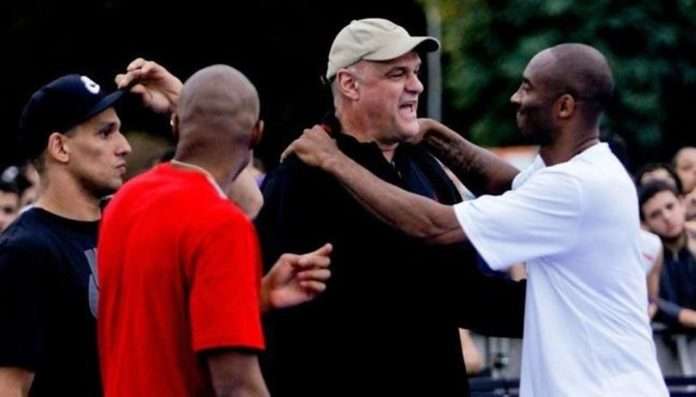 Oscar Schmidt basketball’s all-time top scorer, his scoring stats and basketball career show nothing but legendary greatness and offensive brilliance. From Europe to the summer Olympic basketball games, the Brazilian basketball great holds all the scoring records that exist today.

He was a 6’9 SF/SG that would set fire to basketball nets until he was 45-years-old. He was inducted into the Naismith Hall-of-Fame in 2013.

Schmidt was the finest Brazilian basketball player of all-time and the best scorer to never play in the NBA.

He was the man that changed international basketball. One of the primary reasons for the creation of Team USA’s Dream Team. He would go on to have the longest professional basketball career of all-time, spanning 29 years.

The record books do not lie: that Brazil legend Oscar Schmidt holds the all-time leading scorers’ list in Olympic history with 1.093 points. He played in five Summer Games and represented his country in four FIBA Basketball World Cup tournaments.

He scored 55 points against Spain in the 1988 Seoul Olympics. And although he never reached the heights of Michael Jordan, Magic Johnson or Larry Bird, he was selected in the sixth round of his draft year and chose to remain with Brazil rather than join the NBA.

The All Time Leading Scorer

In the NBA, Kareem Abdul-Jabbar has the most points all-time with 38,387 points. In the history of basketball, Oscar Schmidt is the all-time leading scorer with 49,737 points.

When a future legend of the game was growing up in Italy, he wanted to be like Oscar. That kid’s name was Kobe Bryant and he emulated the Brazilian basketball great.

Oscar was Kobe Bryant’s favorite player. As Kobe was developing his own game, he used parts of what he saw during Oscar’s basketball career in his own game.

Kobe had his own nickname for Oscar too, “La Bomba”, which means the bomb in Italian.

If you Google all-time Olympic basketball scorer, the search results will show article after article stating that the top scorer is Team USA’s Kevin Durant. It will tell you he surpassed Carmelo Anthony to top this list. This is true but only when referring to United States olympic history.

Kevin Durant has scored 435 Olympic points. The actual leading scorer in Olympic history is Oscar Schmidt. Oscar or “Mao Santa” (The Holy Hand) scored 1,093 points during his olympic career. This is the most points in olympic basketball competition.

He also has the highest average for a single olympics in Seoul during the 1988 games and in those same Olympics he had the highest game total with 55 points, scored against Spain.

“Mao Santa” was inducted into the Naismith Memorial Basketball Hall-of-Fame in 2013.

Here’s what Schmidt said about the 1984 Olympics and being one of the five Naismith Memorial Basketball hall-of-famers drafted in the 1984 NBA draft class. This was from Oscar Schmidt’s hall-of-fame speech.

Luka Doncic Stitch Euro Basketball Jersey League Patch Neon XS-3XL
$43.00
Buy Now
We earn a commission if you make a purchase, at no additional cost to you.

In the 1984 Olympic basketball tournament, Oscar Schmidt averaged a point-per-minute but in the 1988 Olympics, he averaged much more than that.

In his eight Olympic basketball games that he played in the Seoul games, he averaged 36.0 minutes-per-game and his scoring average was 42.2 points-per-game.

Brazil never really contended for a gold medal, without Oscar, they wouldn’t have even been competing in the games for basketball at all.

Schmidt began his professional club career at the age of 16 in 1974, with the Brazilian Championship team S.E. Palmaeras. He played there until 1976, when he joined the Brazilian league powerhouse E.C. Siero.

With E.C. Sírio, he also won the South American Club Championship and the FIBA Intercontinental Cup title in 1979.

Oscar dropped in 42 points during the 1979 FIBA Intercontinental Cup Final against the Yugoslav First Federal League club Bosna Sarajevo. Schmidt was the top scorer of the Brazilian Championship in both 1979 and 1980.

There, he became one of the most important players in the history of the club, winning three state championships and the national championship in 1979.

In 1980, Schmidt left Brazil to play in Italy, where he spent four seasons with Virtus Bologna. After that, he returned to Brazil, playing for Flamengo, the club he had supported since childhood. During his second stint with Flamengo, Schmidt won another state championship and the 1986 Brazilian League Championship.

Spalding Euroligue Basketball, 7 Buy Now
We earn a commission if you make a purchase, at no additional cost to you.

He had signed with the Italian Serie A2 club JuveCaserta for the 1982-83 season.

With JuveCaserta, he played in the first tier level Italian League for a first time in the 1983-84 season.

That same season, Schmidt played in a Pan-European club competition for the first time, as he also played in Europe’s third-tier level FIBA Korać Cup’s 1983–84 season.

In the 1985-86 season, he played in the FIBA European Cup, where “Mao Santa” helped the club win the bronze medal.

As a member of JuveCaserta, Schmidt won the Italian Cup in 1988.

Oscar led the Italian top division in scoring six times, while he was a member of JuveCaserta (1983-87, 1988-90 seasons). JuveCaserta eventually retired Schmidt’s #18 jersey.

Schmidt led the first division Italian League in scoring with Pavia the 1991-92 season too. He was also a member of the FIBA European Selection in 1991.

As a member of Pavia, Schmidt also had his highest scoring game in the top division Italian League, as he scored 66 points in a game against Auxilium Torino on November 30, 1991. Pavia retired Oscar’s #11 jersey

While playing club basketball in Italy, Oscar Schmidt stats were unparalleled in Italy and the EuroLeague.

Schmidt joined Valladolid of the Spanish League in 1993. Oscar Schmidt’s stats in the Spanish League mirrored that of his time in Italy, as he was the league’s top scorer in 1993-94, averaging 33.3 points-per-game at 36-years-of-age.

Schmidt returned to his native Brazil for the first time since 1994, to once again play basketball in the Brazilian Basketball Championship, held in Rio de Janeiro. In 1995, he joined S.C. Corinthians, playing there from 1995 to 1997.

Then, he moved to GrÃƒÆ’Ã†â€™Ãƒâ€šÃ‚Âªmio Barueri Bandeirantes / Mackenzie, where he stayed from 1997 to 1999, winning the SÃƒÆ’Ã†â€™Ãƒâ€šÃ‚Â£o Paulo State championship in 1998. Finally, he signed with C.R.Flamengo, where he remained until 2003.

At the age of 39, Schmidt scored 74 points in a match against Santos on 28 November 1997, becoming one of the oldest players ever to score over 50 points in a single game.

As a member of Flamengo, he won the Rio de Janeiro State Championship in 1999 and 2002. Oscar Schmidt was the Brazilian League’s top scorer in each of his final eight seasons from 1996-03.

There was a certain stigma about European players making it in the NBA. The stigma was they couldn’t make it, couldn’t hack it in the NBA. Not any of them. This followed along the lines of the absurd notion that black football players couldn’t play quarterback or middle linebacker in the NFL.

While we’re on the topic of the absurd, here’s one that you might think “Naw, he’s making this up.” Black players weren’t allowed to play in the NBA until 1950 and the reasoning that was given was that black athletes couldn’t jump well enough to play at the highest level. I swear this is a fact.

When Oscar got drafted in the 6th round he found the actuality absolutely ridiculous. Then after he told the Nets coach he was going to average a point-per-minute at the Olympics, he was offered a no-cut contract, no one had ever been offered this before in the NBA. A contract that he turned down.

When he was drafted into the National Basketball Association, he turned down the opportunity to join the New Jersey Nets because he wanted to keep playing for his home nation.

Back in 1984, if a player played in the NBA, they were ineligible to ever play with their national team again. Another factor for Oscar was that he would be forcing himself to take a massive pay cut by leaving Europe and going to the NBA.

It was the insult of his selection in the 1984 Draft, it was the money and most of all, “Mao Santa:” never played in the NBA because he played basketball for his country more than for himself.

Charles Barkley USA Olympics (1992 Dream Team) Signed White Jersey JSA - Autographed NBA Jerseys
Buy Now
We earn a commission if you make a purchase, at no additional cost to you.

Schmidt played in five Olympics, representing Brazil from 1984 to 1996.

He wasn’t in his early 20’s when he was drafted, he was 26-years-old. He led Brazil to the World Cup and multiple Olympics. Nothing was more important to him during his basketball career than international competition with his Brazilian national team and trying to advance as far as talent would allow.

Larry Bird introduced Oscar Schmidt when he was inducted into the Naismith Memorial Basketball Hall-of Fame in 2013. People called Schmidt the European Larry Bird. Personally when I watch him I see more of Bernard King, either way though, ya know.

Here’s what Larry Bird said about the Brazilian basketball icon. Some people say the Dream Team was formed because of Schmidt, he is definitely one of the reasons. Oscar Schmidt’s stats read

The highlight of Oscar Schmidt’s basketball career isn’t his overall stats but one game in 1987.

The Final of the 1987 Pan American games held at the Market Square Arena in Indianapolis, Indiana.

The United States hadn’t lost in country since 1971 and at the half, Oscar Schmidt’s stats read only 11 points and Brazil was trailing by 20.

In the 2nd half, “The Holy Hand” dropped in 35 of his game-high 46 points en route to a Brazilian comeback victory.

That American team with David Robinson, Pervis Ellison, Willie Anderson, and Danny Manning were heavy favorites. It was a huge upset for Brazil and its 29-year-old superstar.

This set-up the 1988 Olympics where Oscar Schmidt’s scoring stats saw him average more than one point per minute. 36.0 minutes-per-game with a scoring average of 42.2 points-per-game.

This is still a single Olympics record as is his 55 points vs Spain that year.

Luka Doncic just recorded the 2nd highest point total ever in an Olympic game, with 48 in a victory over Argentina in Tokyo. Oscar has said he would like to see Luka top his single game record. Maybe Luka can do it someday.

Framed Autographed/Signed Luka Doncic 33x42 Dallas Mavericks Blue Authentic Basketball Jersey Fanatics COA Buy Now
We earn a commission if you make a purchase, at no additional cost to you.