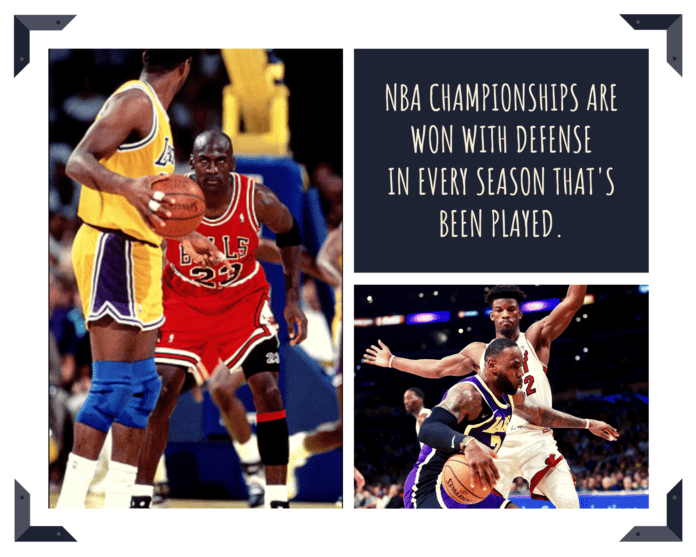 Does having a top 5 NBA defensive ranking win teams championships? Yes, of course, more than any aspect to the game. NBA defense in the playoffs is what separates the contenders from the pretenders.

You don’t have to be the best defense or give up the fewest points in the league but championships have been won with great defenses and mediocre offenses. The opposite isn’t true.

Defense wins championships is not just a saying

Every single championship team has been good in NBA defensive rankings. If you aren’t good defensively in the playoffs, you will lose, this is how I knew the Brooklyn Nets as currently constructed weren’t getting out of the Eastern Conference.

The NBA playoffs are about stopping your opponent from scoring. Scoring the ball is important, but not that important.

NBA defense and then protecting the ball, meaning not turning it over, are the two most important factors to championship success.

If you can’t stop your opponent, you’ve lost before the series even begins. Your opponent will get stops and when you can’t, well, you get it.

The importance of these rankings are accurate and verifiable every single season that NBA basketball has been played.

As the Bucks and Suns prepare for the 2021 NBA Finals, lets delve into the basics. I have had people say things like “in an NBA season, defense winning championships is nonsense”.

I can’t believe that there are fans out there that spend a good portion of their days talking about basketball and don’t know it doesn’t matter how good your offense is if you’re not good defensively. Only being elite offensively can garner a team 60+ wins but it won’t lead to championship success in the playoffs.

It’s unbelievable, just shocking. This is basketball fundamentals people, NBA 101. How does this happen? It’s impossible to have this opinion and still have a valid take on the NBA.

I find this nonsense embarrassing and I almost feel sorry for these fans but that disappears when I attempt to breakdown NBA defensive rankings to these people and they act like I’m the one with misguided facts.

Every single season can’t be wrong

I tell them that every single season the NBA champions have been at least very good with the eye test and in the defensive rankings, especially in playoff stats.

The Suns and Bucks are 1st and 2nd in NBA defensive rankings in the 2021 playoffs though.

The NBA all defensive first team for 2020-21 is led by the Defensive Player-of-the-Year in Rudy Gobert. The Utah Jazz center is a throwback center from the 1990’s in his playing style.

Personally I thought Ben Simmons should’ve been named the DPOY. Without Simmons the Sixers wouldn’t have had the top seed in the Eastern Conference. He defends elite talent at four positions on a regular basis.

Teams can’t exploit the Sixers defense with their superstars because Simmons will take on anybody trying to isolate on the other 76ers defenders.

If the Sixers are without Ben Simmons for the 2021-22 NBA season, their chances at a championship are over. If they get out of the first round of the playoffs, that would be as far as they go.

You got two Milwaukee Bucks as first team all-defense, this is why they are in the NBA Finals in 2021.

When I refer to NBA defensive rankings for the playoffs, I’m not looking at NBA DEFENSIVE RATINGS. This is not because the numbers don’t remain true to my argument. It’s because defensive ratings can be deceiving in many instances.

The team ratings aren’t as bad as the ratings for individual NBA players, but because the individual ratings can be so misleading, I shy away from NBA defensive ratings altogether to remain balanced and true.

A player like Ben Simmons, who is the best perimeter defender in the NBA and guards elite players at four different positions, could have a worse NBA defensive rating than a much lesser defender. Sometimes even an NBA player who isn’t even a good defender at all.

Sometimes Simmons guards multiple elite NBA superstars without help. An example of this is a game from January against the Los Angeles Lakers when he was guarding LeBron James for most of the game but during key possessions Ben was guarding Anthony Davis too.

A player who isn’t a good defender could have a better rating than Simmons because he is purposely either hidden on the defensive end like Isaiah Thomas or Allen Iverson.

Sometimes a player isn’t hidden within the defense but they will be placed much of the time on an offensive player who can’t really break a defender down or doesn’t have much of an offensive game.

When this happens, it makes it appear to the untrained eye that the NBA player who’s team and coaching staff are desperately trying to cover up his defensive flaws is as good or better than a versatile defender like Ben Simmons.

I’ve seen this in many individual players in defensive ratings, it’s why they can’t be depended on. The NBA isn’t MLB baseball, where almost all of the analytics reign true to stats and facts.

When it says in baseball that a player is good or bad at this or that, it isn’t deceiving you in anyway. When it comes to the NBA with a teams defensive makeup, it can be flawed and inaccurate.

How you protect the ball as a team especially the point guard is key to winning in the postseason. Creating turnovers by forcing your opponent turn the ball over comes next in judging a teams championship chances.

Much more important than forcing turnovers is protecting the ball and not turning it over yourself. Point differential is also a vital tool in ascertaining a teams championship aspirations.

It’s the opponents points-per-game and field goal percentage that really take precedence though. The eye test is also important in knowing who the personal on the court is. How good are they at team and individual defense. Individual and team defense aren’t the same thing. Team defense is chemistry, working together.

Someone else said to me recently “did I think that think 2020 Lakers were champions because of their defense“.

Yes of course. The 2020 Los Angeles Lakers had Dwight Howard, LeBron james, Anthony Davis, Rajon Rondo, Danny Green, and KCP. These are all defensive basketball players. Some of them truly great at playing defense in the NBA.

The 2001 Lakers were defending NBA champions and had an NBA defensive rating that was ranked 21st in the league. Someone felt compelled to let me know this.

Nobody who witnessed the 2001 Lakers play basketball would say they weren’t an amazing defensive basketball team.

Kobe Bryant was a great perimeter defender and when he’s not necessarily your best wing defender because you have Rick Fox, you know you have a premiere defense.

I don’t like team ratings, but for arguments sake, the 2000 Lakers had the best NBA defensive rating in the league. The 2001 team was even better because they had Rick Fox at small forward who is a top-notch defender.

He was part of the 2000 championship team too, but Glen Rice started on that team and he wasn’t known for his defense. The 2001 western conference was one of the most talented conferences over the last 25 years.

Seven teams in the west won 50 games or more. This gets lost somewhat today by the way the Lakers dominated the western conference playoffs. They went undefeated with a 12-0 record.

Their players were defensive players. Shaq, Kobe, Fox, Fisher, Horace Grant, Ron Harper and Robert Horry. In the 2001 postseason the Los Angeles Lakers were fresh because they were talented enough to not play hard defense in the regular season and still have the 2nd best record in the west.

When a team wins a championship like the Lakers did the previous season, they know what it takes to win. They didn’t kill themselves in the regular season. In the 2001 playoffs, the Lakers had the best NBA team rating and there wasn’t a close second. Their rating was 97.9, it doesn’t get much better than that.