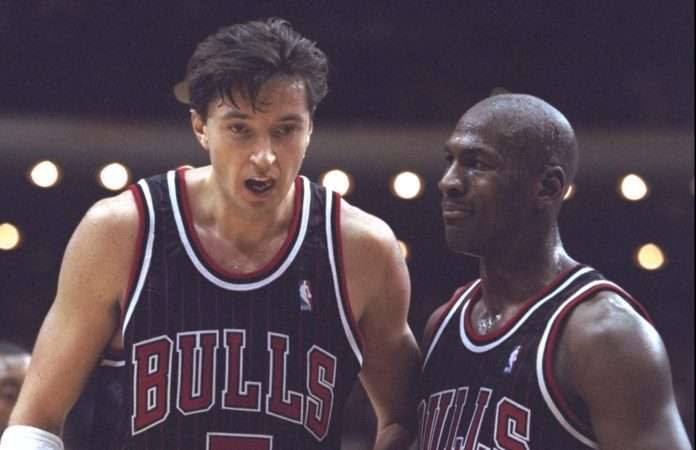 This is a look at Toni Kukoc’s stats, and his upcoming induction into the basketball hall-of-fame. Kukoc is going into the hall-of-fame because of his contributions made as a European basketball player. It has nothing to do with his NBA career.

This past weekend, Kobe Bryant, Kevin Garnett, and Tim Duncan were enshrined into the Naismith Memorial Basketball Hall-of-Fame. The NBA legends were part of the 2020 class. Toni Kukoc will be inducted into the class of 2021.

Some NBA fans think Michael Jordan has another another hall-of famer from the 1990’s Bulls. It’s mostly an attempt to discredit Michael Jordan’s greatness. Michael Jordan is responsible for the Bulls six championships because of who he is and what he did.

Toni Kukoc isn’t going into the Naismith Memorial Basketball Hall-of-Fame for what he accomplished during his NBA career. The international committee will induct him into the class of 2021. The enshrinement only covers his European career in basketball, not the NBA.

At a glance, Toni Kukoc’s stats in the NBA aren’t terrible, but they’re far from hall-of-fame statistics. Toni wouldn’t even be a nominee in a NBA Hall-of-Fame, if there were such a thing.

The 1996 sixth man-of-the-year was a lousy defender too. He was a jump shooter who couldn’t really take opponents off the dribble with any consistency.

Toni had his best seasons playing under Chicago Bulls head coach, Phil Jackson and playing with the championship teams led by Michael Jordan and Scottie Pippen.

Recently the European great said he thought the Bulls should have defeated Hakeem Olajuwon’s Houston Rockets in 1994. They have much to stop Olajuwon. Great defenders like Patrick Ewing had trouble with him. Horace Grant and Bill Cartwright weren’t stopping Hakeem Olajuwon.

Olajuwon was the reigning NBA MVP and the league gave the MVP award in 1995 to David Robinson and Dream just watched across the floor. This was bad for “The Admiral” as the now former MVP felt he had something to prove and show & prove Dream did.

Literally showing the ball to Robinson after beating him and putting on a show in the post that I’ve never seen before. I’VE NEVER SEEN THOSE MOVES REPLICATED.

I don’t think those Bulls would’ve won two games in a series against Houston without Jordan.

He won the NBA Sixth Man of the Year award in 1996 and that was the ceiling for “The Spider of Split” in the NBA as far as individual accomplishments went.

His shooting stats were OK. For his career he shot 44.7% from the field and 33.5% from three point range. They aren’t bad numbers but they’re still below average. It’s not what you want from a player who isn’t giving you much else besides scoring.

Bulls chairman Jerry Reinsdorf and the teams GM Jerry Krause selected Toni Kukoc with the 29th pick in the 2nd round of the 1990 NBA Draft. This occurred a few months after The League of Communists of Yugoslavia dissolved in January 1990 along federal lines.

Reinsdorf and Krause would make trips to visit Toni, trying to recruit him to the Chicago Bulls. Very similar to a college program recruiting high school talent.

The Bulls management team would watch Kukoc play in Europe when they visited and waited impatiently for the Split, Croatia native to come to America. Chicago, Illinois to be more specific. They were hoping Toni Kukoc’s stats would carry over from the EuroLeague to the NBA.

They would say things like “how great it would be for him to play with Michael Jordan and Scottie Pippen” or talk about the success other ex-Yugoslavian basketball players like Vlade Divac and Drazen Petrovic were having in the NBA.

Kukoc finally joined the Chicago Bulls in 1993, three years after the team drafted him. His first NBA season was in 1993-94.

He was a three-time EuroLeague Final Four MVP and the EuroLeague regular season MVP in 1991. Luka Doncic won these awards with Madrid in 2018.

Kukoc led the EuroLeague Finals in scoring in 1990. He was a five-time Euroscar player-of-the-year and a four-time Mister Europa.

He was named to the FIBA top 50 greatest players and to the greatest EuroLeague contributors list of all-time greats.

Kukoc is going to the hall-of-fame mostly because of his career as a European player in the EuroLeague. His international career as a National Team member of Yugoslavia and Croatia was a sizable factor too. He led Yugoslavia to the under-19 junior World Cup in 1987 and was that tournament’s MVP.

A member of the 1988 Yugoslavian silver medal Olympic team. “The Croatian Sensation” was also named MVP of the FIBA World Championships in 1990 and won Gold at the 1989 & 1991 EuroBasket tournaments. He was MVP of this tournament in 1991.

He was a member of the Croatian National team at the 1992 summer Olympics in Barcelona, Spain and helped Croatia win a silver medal. They fell to the Dream Team in the Gold Medal Game.

Four different committee’s make up the Naismith Memorial Basketball Hall-of-Fame. A North American Committee that covers the NCAA and NBA, a women’s committee, a veterans committee and an international committee.

He’d have been presented by the North American committee if he was being recognized for what he accomplished in the NBA.

In 2017, he was inducted into the FIBA Hall-of-Fame though and recently Toni opened up to Bulls sports columnist K.C Johnson about being named to the Naismith class-of-2021. Calling the honor in a zoom interview “Destiny”, and stating “Maybe it was in the script”.

Before he came to the United States, his playmaking ability was most often compared to Magic Johnson’s precision passing, while running “Showtime” for the Los Angeles Lakers. His passes in the EuroLeague earned him the nicknamed “The Waiter”. This court vision must have been lost in translation when he came to America.

Tony Kukoc’s induction into the Naismith Memorial Basketball Hall-of-Fame has nothing to do with his NBA career. The international committee voted him in, not the NBA contingent.

When people say the Chicago Bulls had four hall-of-famers on their championship teams, this is true but it’s not accurate. Many LeBron James lovers who have hatred towards Michael Jordan will use this to distort fans who don’t know any better.

The only player that was an NBA All-Star as a teammate of Michael Jordan’s with the Chicago Bulls (1984-98) was Scottie Pippen. Dennis Rodman, Horace Grant, and Toni Kukoc were never all-stars playing with the Bulls.