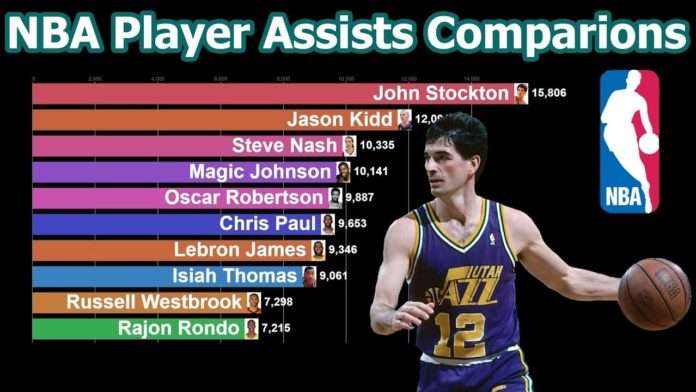 He holds the all-time records for most career assists and steals.

I’m not a Utah Jazz fan and Stockton isn’t one of my favorite players. Personally I didn’t care for them much. It’s like LeBron James said, I wasn’t riding with them in NBA Live. I wanted Michael Jordan to defeat Utah.

I wanted the Houston Rockets to beat Utah in the 1997 Western Conference Finals. Stockton and Malone’s Jazz were down 13 going into the fourth quarter of game 6.

Stockton had 13 fourth quarter points, including the buzzer beating 3 pointer over Charles Barkley’s outstretched arm to break a 100-100 tie. Sending the Utah Jazz to the first of two straight NBA Finals appearances.

Stockton has almost 4,000 more assists than anyone else who ever played in the NBA, there not unbreakable but no one playing today is going to approach them.

How did John Stockton get almost 4,000 more assists than anybody else, is it longevity?

I don’t understand? At least three-times-a-week, I see a post on social media claiming Stockton was nothing special. He is one of the greatest players in NBA history. Many younger fans who didn’t watch some of the legends from the past, they jump to conclusions of stupidity, believing that the stats tell them the whole story.

Real NBA experts know stats can be an inefficient form of ranking players because the rules have been changed to increase scoring in the last 10-15 years. The ball don’t lie but many of the numbers do.

Stop cheating with stats, only because it doesn’t always work and it leads to beliefs that turn into statements that are pure idiocy. You’re embarrassing yourselves. He is NBA greatness, it is as easy as looking at the statistics in this case. I’ve done the eye test and you can too. John Stockton with his stats and records is not to be dismissed.

Is it the stats money?

Anyone who dismisses John Stockton stats, his records, or his greatness, either doesn’t possess any basketball knowledge and most likely never even seen him play.

These people think they’re spreading facts but what they’re really doing is manufacturing declarations of nonsense on social media.

Watch legends like John before you judge them with ignorance. Why wouldn’t you actually want to be in the know? I could never talk about something pretending to possess a level of expertise that I didn’t have. He holds the NBA assist record by a margin larger than almost any other sports record.

John Stockton has 15,806 career assists. This is the most assists in NBA history. Jason Kidd is second with 12,091 career assists. The Utah Jazz point guard has almost 4,000 more assists than Kidd on some Secretariat sh..!

He has the single season record for assists-per-game with 14.5, this John Stockton assist record was set in 1989-90.

An NBA player averaging over 14 assists-per-game has only happened twice in league history, both times it was done by Stockton.

The Utah Jazz franchise came into existence before the 1974-75 season in New Orleans and then moved to Utah before the 1979-80 season. The Gonzaga point guard was drafted in the 1984 NBA Draft, the Jazz never made the playoffs before drafting Stockton.

During his rookie season of 1984-85, the Jazz made the playoffs for the very first time in franchise history. They wouldn’t miss the playoffs again until the first season after Stockton retired, 20 years later in 2003-04.

John Stockton’s stats and assists were common place in Salt Lake City, Utah. In 1992 he won an Olympic gold medal, playing for the United States dream team in Barcelona. He played in 10 NBA all-star games too. Winning co-mvp with Jazz teammate Karl Malone in 1993.

He led the NBA in assists-per-game nine consecutive seasons and he holds five-of-the-six top assist-per-game seasons of all-time.

Someone said earlier this week that “Stock” wouldn’t be able to do anything with Russell Westbrook. He was a five time NBA all-defensive team selection too. Collecting a high Assist average isn’t the only aspect he excelled at.

On February 1, 1995, “Stock” dished out 16 assists against the Denver Nuggets to pass Magic Johnson for the most assists in NBA history. Magic had 9,921 assists at the time.

17 days later in a game vs the Boston Celtics, John had 15 assists and he became the first player to amass over 10,000 assists in the NBA. Then on March 25th, during a game against the Dallas Mavericks, he became the second player ever to reach 2,000 career steals.

There are five major statistical categories in the NBA, points, rebounds, assists, steals, and blocks.

John Stockton doesn’t only lead the NBA in assists, he is also the all-time leader in steals too. He is at the top of the record books in two of the five major statistical categories.

Last month there was a “who’s the top point guard of all-time” list on Facebook and in the description, the writer said “Stockton only had his numbers because of Karl Malone”, this wasn’t an opinion but his reasoning for dismissal altogether. Karl Malone only averaged over 30 points-per-game once during his career. Most great point guards throughout NBA history played with a great big man too.

SO F…ing FOOLISH. Any Point guard list that doesn’t start with Magic Johnson and John Stockton is illegitimate and shouldn’t be taken seriously.

What’s funny about that is someone is going to start arguing this with me. That’s not the funny part, what’s idiotically maddening to the point of laughter is these people will be the same ones who base everything on statistics.

If you’re not coming equipped with expertise or knowledge, at least be consistent.

If you base everything on statistics, why change your method when it comes to Stockton assists or any other of John Stockton’s stats and records?

He holds many NBA records including most assists and most steals all-time. He has the second highest assists-per-game average with 10.51, only Magic Johnson’s is higher (11.19).

I’m not really big on using too many analytics in basketball, especially defensive ones. They can be misleading. They’re not all cut and dry like in baseball.

I’ve covered some of John Stockton’s stats and records and now I’ll dive deeper into the analytics.

He was ranked within the top eight 3 times in defensive rating and has the third best value-over-replacement-player (VORP) in history (106.5). Stockton has the best assist percentage and the 7th best offensive rating in NBA history.

The Utah Jazz hall-of-famer was top 10 in effective field goal percentage 8 times, along with having the NBA’s ninth best true shooting percentage (.608).

Stockton’s win shares are sixth best in NBA history and the best all-time for a point guard (207.7). Eleven seasons he was top 10 and eight of those seasons, he was ranked top 5.

Since I started writing this piece, someone wanted to make sure I was aware of John Stockton’s turnovers. What a joke! John Stockton has a 3.72:1 assist-to-turnover ratio for his career. That is phenomenal. It doesn’t get much better. Chris Paul has an NBA all-time career best ratio of 3.92.

John Stockton played 19 seasons in the NBA. He was the 16th overall pick in the 1984 NBA Draft and after leaving the game after the 2002-03 season as the all-time assists and steals leader, “Stock” was inducted into the Naismith Memorial Basketball Hall-of-Fame in 2009.

Kendrick Perkins basketball expertise and I.Q on NBA history is about as high as his vertical leap was as a player. Why are Steph Curry and Russell Westbrook on a list of any top 5 point guards?

Steph is one of the greatest shooters ever and revolutionized distance but he is a combo guard. He only plays the PG position because he isn’t big enough to be a shooting guard. Not taking anything away from Curry, but he’s a shooter. No matter what he does he isn’t making his teammates better.

No pure shooter is. Maybe if he was a good defender, scratch that, he doesn’t belong here. Definitely doesn’t belong in front of Chris Paul, and Stockton belongs with Magic.

Kendrick Perkins is a damn idiot. I’m thinking of all the great point guards as I’m typing, the ones who could be or should be here. Really you’re putting Russell Westbrook in your top 5? He wouldn’t crack the top 10 of most knowledgeable fans lists.

Every time he gets two assists, he turns the ball over. If Perkins doesn’t know or understand the talent that has played in the past, then he should just focus on the current players in the league.

John Stockton’s stats show he has 3,715 more assists than Jason Kidd in 2nd place, and 5,471 more than the 3rd ranked Steve Nash. These are like high school numbers.

Chris Paul is the active NBA leader in steals. For him to break Stockton’s record he would have to average about 100 steals for the next decade. That puts CP3 at 45-46-years-old and the record being broken around 2031.

This tweet is from someone who doesn’t suffer from idiocy but the person replying to the knowledgeable tweet suffers from idiocy with stupidity.

“Stockton was amazing, but everyone knows those assist totals are rubbish. Stockton averaged 4 more assists per game at home compared to the road. Just home cooking by the scorecard keepers”.

I get dumber every time I read this. Just staring aimlessly in confusion. I guess he’s saying Stockton was amazing but his assists are manufactured?

WTF, WTF, WTF are you FU…… TALKING ABOUT. There is literally a definition to what an assist is. It’s when a player leads another player to a field goal within two dribbles or less.

How much greater was Stockton at getting assists compared to everyone else? Looking at his totals, it makes some people skeptical, like “NONSENSE, THAT’S RUBBISH!!!

By the way, everyone DOESN’T know John Stockton’s stats are fake, because they’re not. “Stock” didn’t play in the 1950’s, you could literally go back and watch those assists. It’ll take a while because of how many he had, but it can be done.

Just a piece-a-crap thing to say anyway. Trying to convince people not only that his stats aren’t authentic but throwing in that everybody knows this. Especially when these opinions are nothing close to facts but self materialized fiction. His opinions are false. This man exhibits an abundance of incognizance, basing everything on ideas that are baseless.

Guess where those stats rank him? That’s right, I don’t even need to tell you where he ranks, you already know.

John Stockton had 27 assists in a road game, back in 1989, strictly on some “RUBBISH NONSENSE”. John Stockton has had many 20 assist games on the road.

Stockton did not average four more assists at home compared to the road. This is either a lie or a person not equipped for this conversation. MISINFORMED.

When the Jazz went on the road, the opponents must have tried to pad Stockton’s stats too. For his career, John Stockton averaged 10.9 assists at home and 10.1 assists on the road.

Kyrie Irving return to Nets will prove to be a mistake