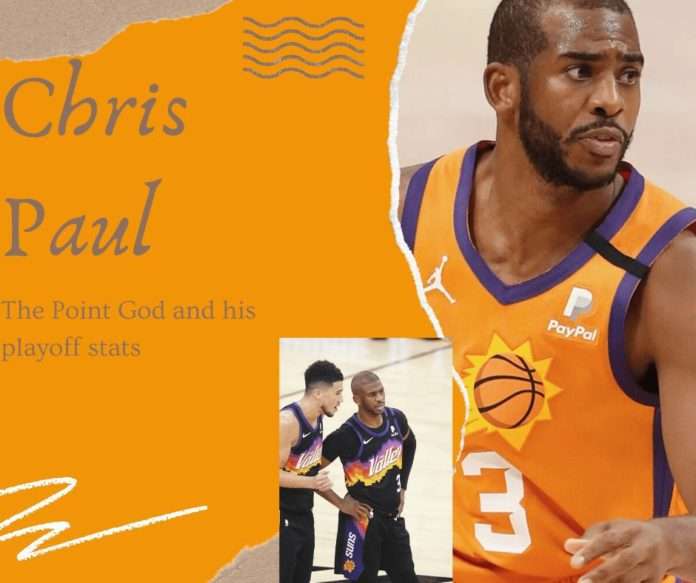 Chris Paul, the point god and his playoff stats. He is one of the greatest point guards to ever play basketball in the NBA. What do Chris Paul’s playoff stats say about him, the answer is more than many fans want to give him credit for. That’s for sure.

What is a good assist-to-turnover ratio for a point guard in the NBA? 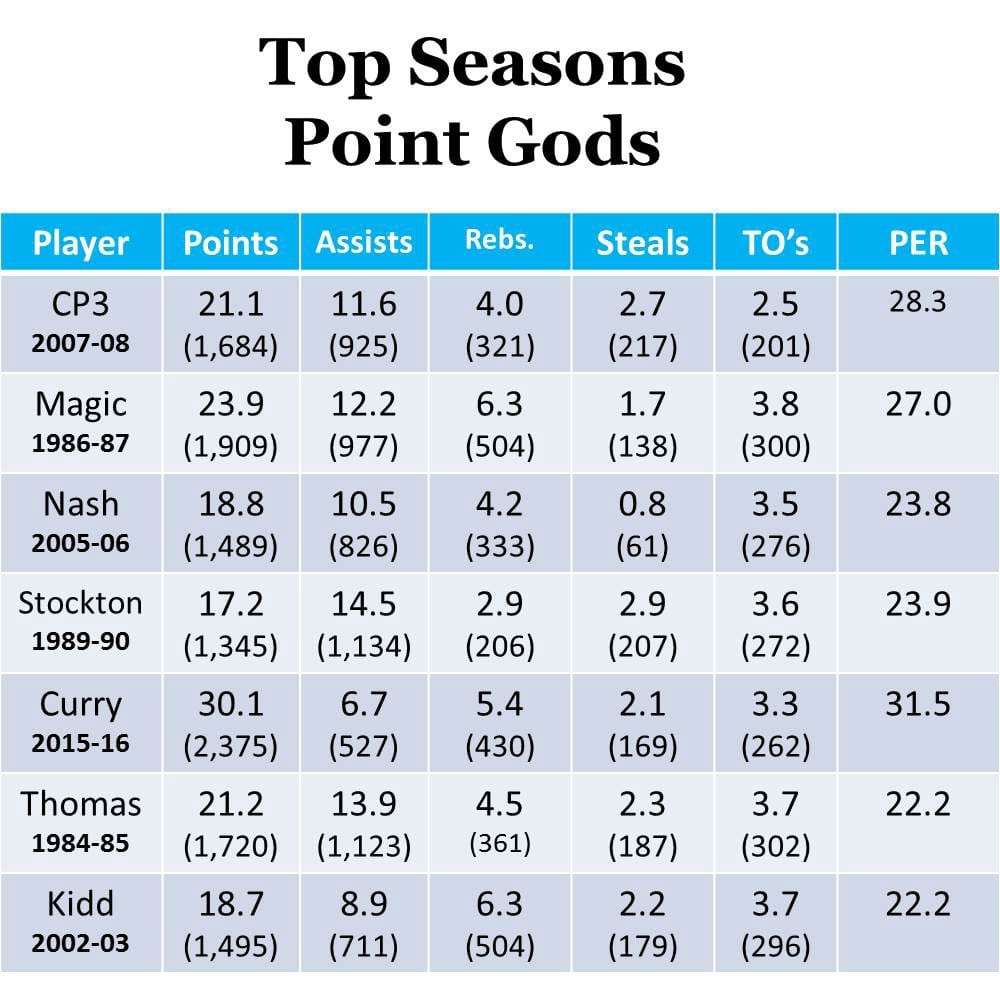 It shows how efficient he is as a floor general.

Chris Paul assist turnover ratio with the Phoenix Suns in 2021 was 4:1. He has a 3.92 assist-to-turnover ratio average over his 16 year NBA career. For all of Chris Paul’s accolades and career stats, this is the most revealing in uncovering his greatness.

No NBA player has a higher career assist-to-turnover ratio than Chris Paul does. John Stockton has the second best ratio at 3.75.

His highest assist-to-turnover ratio in a single season was in 2013-14 with the Los Angeles Clippers, he had a ratio of 4.65:1.

CP3 has had a 4:1 ratio in 12 of his 16 NBA seasons including the 2020-21 season with the Phoenix Suns. He is the only player in the NBA that’s ever accomplished this.

Paul was a star point guard before he was a McDonald’s All-American in 2003. He was a standout star and a part of the same high school class as LeBron James.

He played high school basketball at West Forsyth High School in Clemmons, North Carolina. Paul got national attention when he scored 61 points to honor his grandfather, Nathaniel Jones, who had been murdered earlier that year.

He said prior to the game that he would score 61 points. It would become known as the “Parkland game”. Parkland was CP3’s opponent that night.

His 61st point was on a drive to the net, as the ball dropped into the basket, CP3 was fouled, he intentionally missed the free throw by throwing it out of bounds and then left the game.

At Wake Forest University in Winston-Salem, North Carolina, CP3 was a First-Team Consensus All-American as a Sophomore, leading Wake Forest to its first #1 national ranking in school history that same year.

Many NBA fans refer to Paul with the abbreviation of his initials and jersey number, CP3, others use another nickname in referring to him, “the Point God”.

CP3 is one of the best point guards in NBA history. It’s not really up for debate.

He was drafted with the fourth overall pick in the 2005 NBA Draft by the New Orleans Hornets, two months before hurricane Katrina hit. Since then Chris Paul’s career stats and accolades have included,

Paul as a basketball player is not a combo guard, he’s a true point guard. He sets the pace, he has great vision, and makes everyone playing with him look better and makes the game easier for his teammates.

He is not Allen Iverson, his game isn’t based on how many points he scores. He’s a master of the pick-and-roll, most auspiciously with Blake Griffin and the Los Angeles Clippers from 2011-17.

CP3 is a future first ballot hall-of-famer, first and foremost because he makes his teammates better with his vision and passing ability. His Lob passes to the rim are some of the best on target lobs in NBA history. He garnered the Los Angeles Clippers the nickname “LOB City” because of this.

Paul exhibits superior quickness and change of direction to go along with his top-notch agility and handles on the court. He displays good athleticism and has improved his jump shooting throughout his career.

Sometimes the “point god’s” defense isn’t recognized by the casual fan. I’ve even have had people on social media tell me he wasn’t a good defender. The nine All-Defensive teams that the NBA has selected him to usually ends this argument.

CP3 has some of the quickest and most active hands in the history of the NBA. Trying to pass to the opposite side of the floor against Paul will only result in him picking off many of those attempts.

Chris Paul has been amongst the leaders in 4th quarter stats, the last couple of seasons.

There is this sentiment circulating that Chris Paul is a choke artist in the playoffs. This isn’t true.

“The perception of Paul underperforming in the playoffs is overblown. … In 102 playoff games, Paul has averaged 20.9 points, 8.5 assists and 5.1 rebounds per game. Those numbers are in line, or better, with his career regular season averages of 18.5 points, 9.5 assists and 4.5 reb“.

Chris Paul has better career playoff stats than he does in the regular season. There are fans who will say that “he was 1-6 in the 4th quarter” of this game or that game, but as I stated before, he is a true point guard and it’s not really on him when his teammates don’t knock down shots that he sets up.

Paul’s playoff record is around .500, but he’s never really been on a team that was supposed to win an NBA championship. Some people saw the Clippers as a longshot contender, but no one was like “LAC IS THE BEST TEAM IN THE NBA”, because they weren’t.

Before Paul became a member of the Los Angeles Clippers, a deal was completed to send him to the Lakers in a 3-team deal involving the New Orleans Hornets, Houston Rockets and Los Angeles Lakers on December 8, 2011.

In the deal, CP3 would essentially be traded to the Lakers to team-up with Kobe Bryant and Andrew Bynum. The trade was essentially Paul in exchange for Lamar Odom and Pau Gasol.

NBA Comissioner David Stern decided to veto the trade after it had been reported by the national media that it had been already completed and the trade was official.

There are playoff series’ that some fans will say Chris Paul choked, his career playoff stats speak differently though.

If you look at those playoff series’ and Chris Paul clutch stats, you will see CP3 averaged something like 23.5 points-per-game and 13 assists in some of these series losses.

Whether beating the Memphis Grizzlies late in a 2013 playoff game, beating the Portland Trail Blazers or taking a 3-2 lead against the Golden State Warriors in 2018, he has been clutch.

In game 7 of the 2015 Western Conference Finals against the defending NBA champion San Antonio Spurs, “Clutch” Paul suffered a hamstring injury, when he returned to the game, his clutch performance led the Clippers to the next round. That includes the game winner and series clincher.

Watch above this section for his brilliant clutch performance highlights from that playoff game back in 2015.

As a member of the Houston Rockets with James Harden, CP3 led Houston to the Western Conference Finals, dropping 41 points in a win over the Utah Jazz. This is Chris Paul’s career high in the playoffs.

Unfortunately up 3-2 in the WCF vs. Golden State, Paul had another hamstring injury and did not play in games 6 & 7. The Warriors came back to claim the series en route to the NBA championship.

On march 21, 2021, Paul became the sixth player in NBA history with 10,000 career assists. It came on a pass to Deondre Ayton, in a game CP3 had a triple-double against the Los Angeles Lakers.

As Paul moves up the NBA’s all-time assist list, hopefully some of the people that deny him his credit will do a 180.

Oscar Robertson came close with only ended up with 9,887 assists and John Stockton came just short with 19,711 points.

Many of Paul’s squads wouldn’t have made the playoffs if he wasn’t running the team. The Clippers teams that were so highly touted, in truth were overrated in my opinion.

If you take Paul off those teams, they are a 6-8 seed in the western conference. Similar to Blake Griffin’s Detroit Pistons teams.

When he left to join the Houston Rockets, the Clippers didn’t make the playoffs for the first time since the year before the “point god” joined the franchise in 2010-11.

What he did for the Oklahoma City Thunder in the 2020 Bubble was just miraculous. He showed his legendary greatness in getting that team to the postseason and then displayed his playoff brilliance in the bubble.

Chris Paul is an MVP candidate again in 2021 with the Phoenix Suns. He is showing a young team with no postseason experience, how to win with consistency.

CP3 is one of the top 5 point guards in NBA history and he is still adding to his accolades and playoff stats. A first ballot hall-of-famer, who will be enshrined for his passing and playmaking ability, that’s how he makes his teams better by being the floor general that improves his teammates by making the game easier for them.

The purpose of this article was to show the greatness of CP3 for the people who think he is a NBA playoffs choker. This was never the case.

After sweeping the Denver Nuggets, Paul tested positive for Covid-19 and missed the first two games of the WCF, returning to the basketball court for game 3.

In the western conference finals, series clinching, game 6, the Phoenix Suns’ Chris Paul equaled his NBA playoffs career high with 41 points. He also had 4 rebounds, 8 assists, and 3 steals, all this done in a game where he didn’t commit a single turnover.

He was 16-24 from the field (66.7%) and shot 7-8 on three pointers (87.5%). The man with the best assist-to-turnover ratio in NBA history had zero turnovers in this conference clinching performance. Chilling stuff.

Paul will play in his first NBA Finals against the Milwaukee Bucks in 2021. Many fans need this championship to solidify Paul’s career. CP3 himself probably feels this way, but his greatness was set in basketball history before the 2021 postseason even started.

From his inception into the public eye, the “scoring 61 points for your granddad” game, to fans saying he would never even make it to the NBA Finals, now in Phoenix, with the best collection of talent he’s ever played with.

Now CP3 looks to make his final push without any help from Patrick Beverly to the top of the NBA summit.

In short order everything will be history, delivered into the record books. Will CP3 have a championship ring in the end?

Kyrie Irving return to Nets will prove to be a mistake