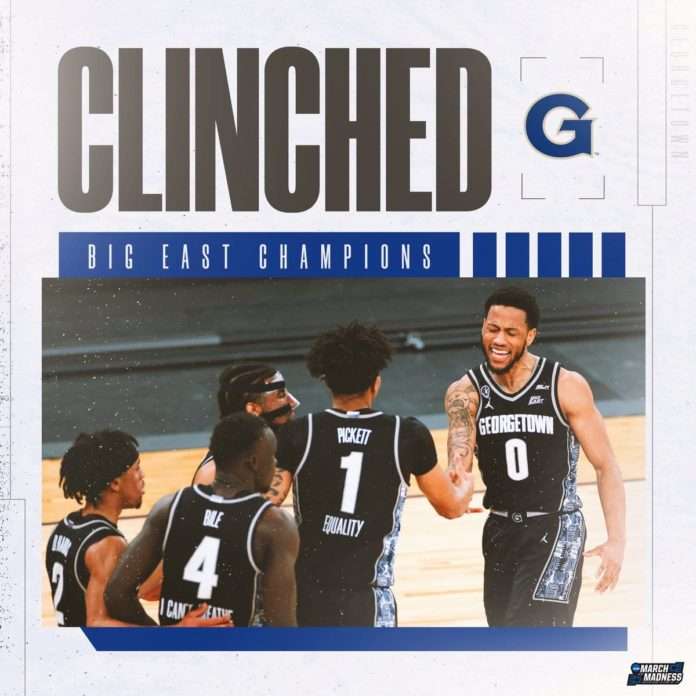 The Georgetown Hoyas and head coach Patrick Ewing surprisingly are the Big East champs for 2021. It feels like for the Hoyas, this could be the resurrection of the Georgetown program.

On Wednesday March 10, 2021, the Georgetown Hoyas were 9-12, the 8th seed in the Big East tournament. They were an after thought in the Big East and college basketball nationwide.

After disposing of Marquette 68-49 in the first round, the Hoyas had a date with the top seeded Villanova Wildcats.

This Hoyas team kept fighting and battled back with their own 13-1 run. Eventually winning, earning a major upset of the top seeded Wildcats.

Most people and experts thought either Villanova didn’t really care or just played bad against the Hoyas. A good free throw shooting team, Villanova had a subpar game at the charity strip.

On the opposing side, Georgetown was a perfect 23-23 from the line, a Big East tournament record.

Maybe this was the reason the Hoyas upset Villanova. Maybe it was a mixture of all these elements or maybe they just got beat by Georgetown down the stretch.

It didn’t matter to the experts though. Anyone who is in the know, knew the Hoyas next opponent in the semi-finals would beat them and end this thing Patrick Ewing’s team was doing in New York City.

It’s not like the Georgetown Hoyas were jelling as a unit and on their way to becoming Big East champs. It’s not 1984 after all, and Ewing isn’t standing in the paint, he’s standing on the sidelines.

Patrick Ewing was hired to bring HoyaSaxa back to prominence the night North Carolina won the 2017 national championship.

In his first season his team got off to an 8-0 start but the season ended with the Hoyas 15-15. Jamorko Pickett and Jahvon Blair were named to the Big-East all-freshman team in Ewing’s first season.

In 2019, Ewing was five games over .500 and Mac McClung, Josh LeBlanc, and point guard James Akinjo were all named to the Big East all-freshman team. Akinjo was named Big East Freshman-of-the-year as well. Georgetown was trending upwards heading into 2020.

Early into the 2019-20 season, Josh LeBlanc and James Akinjo left school. The facts about this are shoddy at best.

LeBlanc, Akinjo, Galen Alexander, and Myron Gardner either left school or were dismissed, then Mac McClung left for Texas Tech.

Akinjo transferred to the Arizona Wildcats and is a first team Pac-12 performer in 2021 and McClung was a second team all-conference selection at Texas Tech.

Next up for the Hoyas in the Big East basketball conference tournament was Seton Hall, who they defeated in a close game. This made the Hoyas 12-12. Heading into the 2021 Big East championship game, Georgetown seemed to be playing together as a unit, with toughness, and determination. This can be attributed to the head coach and the practices he teaches. He preaches hard work, team defense, toughness, and sharing the ball, he expects it, just like his coach John Thompson did.

Another Big East title for Ewing

Patrick Ewing likes playing in the Big East tournament and is very familiar with Madison Square Garden, to say the least. Even though MSG doesn’t seem to remember him.

‘everybody in this building should know who the hell I am’

Creighton was predicted to beat Georgetown and be crowned Big East champs too. It didn’t go down like that though. Georgetown are the Big East conference men’s basketball champs for 2021. Who would’ve believed it five days ago?

They beat Creighton 73-48. It was a landslide victory for Patrick Ewing’s team. Georgetown winning the Big East championship was unlikely but now they head to their first NCAA tournament under Pat Ewing.

Whatever happens during March Madness, Georgetown seems to have their program back on track, after the slight hiccup they endured last season, before Covid affected everyone.

looking ahead for Hoya Saxa

Patrick Ewing will have his first 5-star recruit next season in Aminu Mohammed out of Springfield, Missouri. Georgetown will be bringing in Dikembe Mutombo’s son, Ryan, a 4-star, 7 footer.

Patrick Ewing is looking like the head coach many thought he would become. The Georgetown Hoyas are the 2021 Big East champs and are heading into March Madness on a roll.

The Hoyas have tough kids, who have been coached up by Georgetown’s staff. It feels like Patrick Ewing is putting the Big East and college basketball on notice. Hoya Saxa is coming for you, now and in the future.

The way the Hoyas performed in the Big East tournament, they deserve to be in the NCAA tournament. I doubt there’s a coach who wants them in their region of the bracket. That’s how madness happens and brackets get busted.