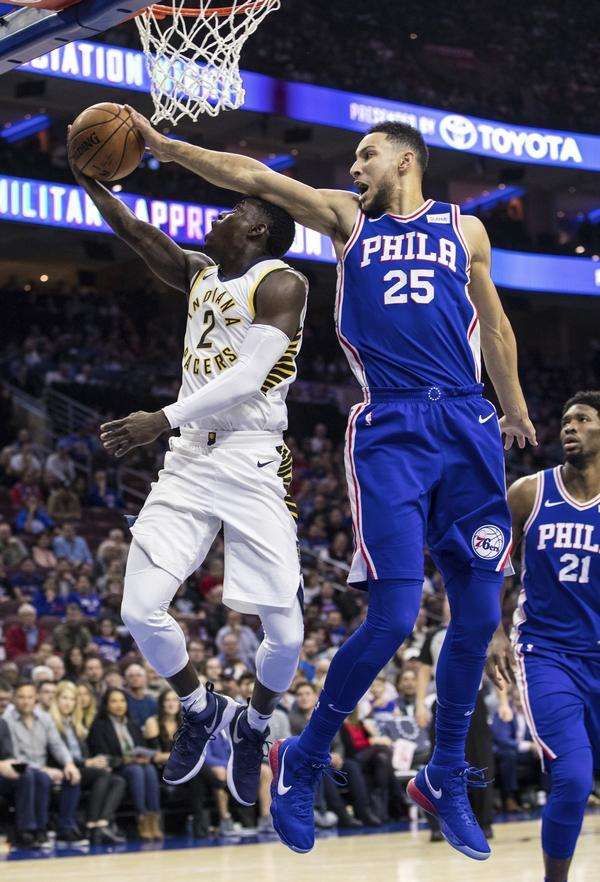 Ben Simmons defense, at his height and with his length has been a beautiful thing to watch in 2020-21. He is a problem for every elite scorer in the NBA, regardless of what position they play. Ben Simmons’ height and length allow him to be a nightmare for guards and gives him the versatility to defend forwards.

Ben Simmons is the best perimeter defender in the NBA today. He is so much more than that though.

Only a handful of defenders in the NBA were ever as versatile as Ben Simmons is on defense in 2021. He routinely defends four positions on the floor without any help. He does this and helps other teammates with their assignments.

Without Ben Simmons the Sixers wouldn’t have a good perimeter defense, it would be a liability. Ben Simmons guards more of the NBA’s top superstars than any other defender in the league.

When Doc Rivers finally got to evaluate the 2020-21 Philadelphia 76ers, he obviously said to the squad, if any opponent tries to isolate on Tobias Harris, Seth Curry, Shake Milton, Furkan Korkmaz, or Tyrese Maxey attempting to expose a mismatch on the Sixers perimeter, switch with Ben.

Ben Simmons defense has no limitations when guarding the NBA’s best offensive players on a nightly basis. One night he’s guarding an athletic power forward like Pascal Siakam, the next game his assignment could be Dame Lillard, James Harden, LeBron James or Bradley Beal.

If the Sixers are playing the Brooklyn Nets, Simmons could be checking Kevin Durant, Kyrie Irving or James Harden on any given possession.

In late January, the Sixers beat the Lakers on a game winner by Tobias Harris. Ben Simmons had a 17-11-10 triple-double that night. Most fans saw and recognized this but that wasn’t the most amazing thing he did in this game.-

Ben Simmons displayed unique versatility by guarding LeBron James, Anthony Davis, and Dennis Schroder at different times during the game and not on doubles or switches. MAN-UP.

When Dennis Rodman was in Detroit he could guard every position on the floor. When all is said and done, Dennis Rodman may be the only defender more versatile than Ben Simmons is on defense.

I mentioned at the beginning of the article that only a handful of defenders had the defensive versatility of Ben Simmons. LeBron James is one of them.

One of my top five moments in the legendary career of “King” James is never mentioned. LeBron bodied Derrick Rose in pivotal situations during the 2011 Eastern Conference Finals. He Shadowed the MVP, something nobody else seemed capable of doing at the time.

Derrick Rose didn’t seem to believe it was happening. It was the key factor in Miami advancing to the 2011 NBA Finals. LeBron never really showed up for those Finals, I think he missed the plane or something.

Only two things stopped Derrick Rose on the basketball court from 2010-2012, LeBron James was one of these and his own knee was the other.

Ben Simmons has the same skillset as LeBron James in every category that is used to evaluate talent and make up scouting reports, the only difference is he doesn’t possess a jumpshot. If Simmons did develop a jumper, he would be the best player in the NBA when he enters his prime in 3-4 years.

LeBron & Ben are the only two players with this skillset. Ben Simmons with a jump shot is the closest thing to LeBron James that there is.

Some people think they know more about evaluating talent than I do. This statement makes some fans accuse me of lacking proper basketball knowledge. If this is what you’re thinking right now, I assure you, it’s you lacking the expertise, not me.

With Ben Simmons height and his defense, he can make a career out of defense and point guard skills but to take the Sixers to the next level he’ll probably need a jumper to keep defenses honest in the playoffs. Good defenders can cheat on Simmons now, making it tougher on Ben to get to the rim.

Ben Simmons is the tallest of all point guards in NBA history. Actually he is the tallest guard regardless of position including any shooting guard that’s ever played in the league.

Ben Simmons height is a great advantage for the Australia native. Especially considering that he has the athleticism and agility of a normal sized point guard.

The average height of point guards in the NBA is 6’2-6’3. Dallas Mavericks superstar Luka Doncic is 6’7 and Magic Johnson was 6’9.

The point guard is usually the shortest player on the court but not for the Philadelphia 76ers. Ben Simmons height is a problem for Sixers opponents on a nightly basis.

How tall is Ben Simmons?

Ben Simmons height is listed at 6’11, making him the tallest guard in NBA history.

There are 76ers fans on social media that say Ben Simmons lacks heart and toughness. They call him soft.

I say to these people STFU! STFU because you are ignorant and don’t deserve to be allowed to talk Sixers basketball with fans that understand the game.

YOU KNOW WHO YOU ARE, STFU!!!
There isn’t a player in the NBA who is half the defender Ben Simmons is that lacks heart or toughness. You must be tough and have heart to do what Ben Simmons does on the defensive end with half his consistency.

Most of what he does is natural talent and ability, but to utilize these talents and advantages that takes toughness. A lot of toughness.

Ben Knows it, do you?

Ben Simmons knows what he is capable of on defense. He thinks he’s the best defender in the league and he plays like he’s trying to prove it to the Philadelphia fans every night.

The Sixers became a playoff team the first game Ben Simmons played. Not before then.

Unfortunately there are too many Sixers fans that seem to only care about what the boxscore says after each game.

Even if a fan’s knowledge is inept at recognizing defensive assignments and what Ben Simmons means to the Sixers defense, they shouldn’t be shockingly amazed at his quickness, athleticism, speed, and vision when he’s pushing the ball.

Ben Simmons is the tallest point guard to ever push the rock at 6’11, 240 pounds. He pushes the rock and puts pressure on the opponents defense.

Ben Simmons has one of the best assist-to-turnover ratios among assists-per-game leaders in the NBA. This is impressive considering the pace he runs his offense.

If the Sixers had an offense with elite wings running the floor, believe me when I say Ben Simmons might be leading the NBA in assists-per-game.

Kendrick Perkins gets it.

Knock off the Nonsense

Many Sixers fans have become more knowledgeable and understand the uniqueness and versatility that Ben Simmons brings to the defense. Many have not and don’t want to hear it.

I’ve heard some really ridiculous things lately that people talk about on social media, ideas like trading Ben for Zach Lavine. Wait, what, how is that a conversation at all?

Some fans are upset the James Harden trade didn’t go down. I gasped a sign of relief when Harden went to Brooklyn. There have been many defenseless scorers like James Harden throughout the NBA’s history, they never lead teams to championships. Harden won’t either. The Nets won’t be winning anything this season. They’ll be lucky to escape the 2nd round of the playoffs.

How many points you score’s important, but not that important

How many points you score in playoff games is important but it’s not that important. It’s not like scoring points decides who wins or loses playoff games.

If you think that last statement is stupid or idiotic, you my friend have much to learn.

NO TEAM THAT ISN”T GOOD DEFENSIVELY HAS EVER WON AN NBA TITLE AND NEVER WILL.

By the 2nd round of the playoffs, your opponent will get stops when it matters, if you can’t reciprocate by stopping them, you lose. You lost before the series even started.

The Nets have zero chance to get to the NBA Finals. They can’t get stops.

This has been true every single season that the NBA has crowned a champion. Don’t worry how many points Ben Simmons scores, focus on how well he is stopping the opponent from scoring the ball.

Another thing Ben Simmons haters like to post about is that he has regressed since his rookie season.

If anyone was on the fence about this, I hope this article has helped them realize that this is laughable at best.

Ben Simmons guards the best players in the NBA every game, regardless of position.

He led the NBA in steals in 2019-20 and is among the leaders this season too.

Simmons was a first team all-defensive team selection last season and will be once again in 2021.

When all is said and done, he could be the NBA defensive player-of-the-year. No one else is capable of picking up the assignments Ben Simmons does defensively on a nightly basis. No one, not in the NBA.

Buss needs to be guided on Lakers payroll & future

Sixers payroll reality after being sold the Brooklyn Bridge

Alec Bohm can Flourish in Future at First for Phillies