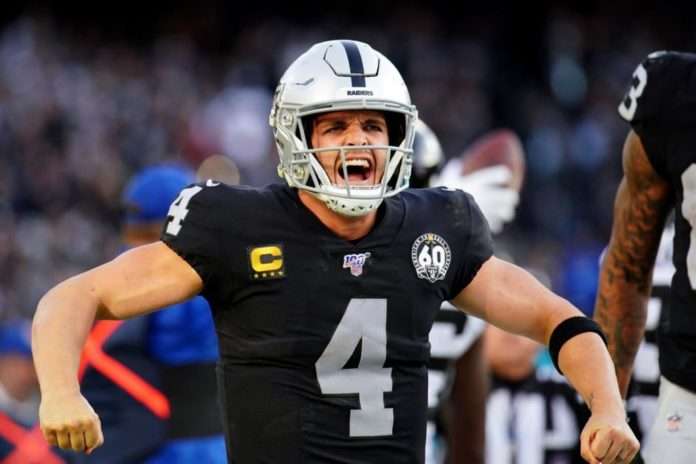 Raiders QB Derek Carr stats have been consistent and impressive. He is the most underrated quarterback in the NFL today, throwing for 4,103 yards and 27 TD passes in 2020.

Many great NFL players have played for the silver and black. Carr is better than most of them.

Las Vegas Raiders Quarterback Derek Carr isn’t a future hall-of-fame legend like Aaron Rodgers or Tom Brady but he may be the most underrated quarterback in the NFL today, from his stats to his on field play.

The Raiders defense needs to vastly improve in 2021. Only six teams gave up more yards than Vegas did. They also ranked 29th in sacks in 2020 with only 21.

The Raiders were in the bottom third of the league in interceptions too. Only nine teams gave up more yards-per-attempt than Vegas did (7.5). All these teams had one thing in common, none of them made the postseason.

NFL PRO LINE Men's Davante Adams Black Las Vegas Raiders Game Jersey
$129.99
Buy Now
We earn a commission if you make a purchase, at no additional cost to you.

There have been talks of the Raiders trading Carr. Rumors started at the beginning of February that the Raiders might be interested in trading him and that there were other teams asking about his availability.

My first thought was Derek Carr is a very good and underrated quarterback. Trading him might come back to bite the Raiders in the ass.

Rumors have been circulating about a 3-team trade involving Carr and Deshaun Watson, where the Houston Texans quarterback becomes the new signal caller for the Raiders.

I can’t imagine that Gruden doesn’t like his QB. If he wasn’t sure about him when he took the Raiders job, he must be convinced now. Recently the Raiders organization reportedly said they weren’t actively shopping their quarterback.

What I can plainly see in evaluating Carr is that he is one of the very good quarterbacks in the NFL. He is good enough to lead a team to the playoffs. Anything beyond that is unknown and out of his hands. The Raiders aren’t a playoff team because of other issues with the team, not the quarterback.

Even now, some fans want back-up and former 2nd overall pick Marcus Mariota to start, thinking he is the answer like when Nick Foles brought a super bowl title to Philadelphia for Eagles fans. Washington reportedly is very interested in acquiring Carr. What he’s worth varies in the eyes of different people. I’ve heard two first round picks all the way to a second round pick.

Anyone who thinks Carr is only worth a second round pick is a moron. He isn’t the elite-of-the-elite quarterback like Rodgers, Brady, or Patrick Mahomes, but he is leading that next level of very good quarterbacks with the ability and talent to join the elite.

He was only 14th in the league with 517 pass attempts in 2020 but threw for over 4,000 yards. A better defense that puts the ball back in Carr’s hands is one way he could get more passing attempts. This would mean more passing yards and touchdown passes to Darren Waller or a wide receiver.

Jon Gruden is a quarterback guru, despite this, his teams have always ran the ball. Gruden isn’t one of those QB coach’s that’s been a pass, pass, and then pass again play callers. He has always kept his offenses pretty balanced and as a result Carr’s attempts went down since Gruden took over the job. Despite this, his numbers have still increased overall. Two moments stick out to me when I think of Derek Carr, the first is the season opener of his senior season at Fresno State.

The 2013 college football season started on a Thursday and what I remember is watching the Fresno State quarterback play Rutgers and pass for 465 yards with 5 touchdowns.

I thought “this guy is a top 5 pick in next years NFL draft”. Not because of his stats but rather his skillset, poise, and temperament.

He didn’t get drafted until the 2nd round of the draft though. I chalked this up to his brother’s failures as the first overall pick in the 2002 NFL Draft. David Carr didn’t live up to the expectations that were expected from him.

I knew Derek was not David Carr, and I thought the Raiders got a steal drafting him with the 36th overall pick.

The second thing, it just happened within the last 6-7 months. I was on twitter and people were talking about Carson Wentz and someone said something about Carr.

The tweet was pertaining to “wasn’t Carr supposed to be good”. It made me look up his stats, this was prior to the 2020 season. It showed Carr just threw for over 4,000 yards for a second straight season in 2019.

I was surprised when I saw his numbers because they were better than his three pro-bowl seasons in almost every statistical category. I was caught off guard by the solid but silent season he put together. The sentiment nationally was he wasn’t playing well.

Any talk about him seemed to have negative connotations, like he was regressing, but this was not the case at all. So I paid extra close attention to him in 2020. Derek Carr is idiotically underrated by media and fans alike.

In 2020, the Raiders QB entered his 8th season as the starter and had his best receiving corps to date in superstar tight end Darren Waller, rookie 1st round pick Henry Ruggs iii, and ex-Eagles veteran Nelson Agholor. From a historic season from each quarter-back, Kurt Warner became the first undrafted player to be named Super Bowl MVP after leading the St. Louis Rams to a victory at Super Bowl XXXIV.

In his second season for the Indianapolis Colts, Peyton Manning led the team to the playoffs with a 13-3 record. With signatures from each store, this card is a must-have for any serious collector.

Buy Now Our Review
We earn a commission if you make a purchase, at no additional cost to you.

I think it’s a joke Raiders media and fans create buzz concerning a Derek Carr trade. The Las Vegas Raiders have holes and weaknesses to fix on their football team and most of them are on defense.

This is what is stopping Vegas from being a playoff team. The Raiders gave up 29.9 points-per-game. Only the Lions and Jaguars gave up more on average.

You really can’t expect your quarterback to have to put up 35-40 points to win, and then criticize him when it can’t be done on a weekly basis.

He won the first home game ever for Las Vegas as the Raiders defeated the New Orleans Saints at Allegiant Field, the new Raiders home that is adjacent to the Las Vegas strip.

The Raiders veteran signal caller set a new NFL record with the most fourth quarter comebacks through his first seven seasons with 20 comeback victories.

No quarterback in the history of the NFL has led his team to a “W” in the 4th quarter more than Derek Carr has in his first seven seasons as a professional.

The Raiders faced off with Miami in week 16. NFL Network, Carr threw for 336 yards against the Dolphins in this game televised on NFL Network. He put the Raiders up on the scoreboard, though Miami kept pace.

Derek Carr led the Raiders down the field after Miami scored in 42 seconds to take the lead. Derek took a knee with 19 seconds remaining in the game and Vegas kicked the field goal for the lead.

It would only take Miami 18 seconds to get in position and kick the game winning field goal, eliminating the Raiders from playoff contention in 2020.

Before I get into numbers, Raiders QB Derek Carr has the poise, leadership, arm strength, and intangibles to be a top NFL quarterback. He isn’t far off now.

Ten quarterbacks threw for more yards but only one of those had less passing attempts, Kirk Cousins had one less pass attempt than Carr had.

To add some relevance to this, six of those top 10 completion rates are from future hall-of-fame quarterback Drew Brees.

As Derek Carr’s career continues, he will call Allegiant Stadium home for the second year, leading the Las Vegas Raiders offense in the 2021 season.

Darren Waller will still be the focal point for the Raiders passing game, the tight end has had 1,100+ yards receiving in each of the last two seasons.

Henry Ruggs iii, the first wide receiver taken off the board in the 2020 NFL Draft only had 452 yards and 1 touchdown as a rookie. If the Alabama alum is ready to take his game to a higher level in 2021, this will help the Raiders offense.

It’s Vegas’ defense that needs to play better football in 2021, if this happens, the Raiders

will easily be a playoff team. Given that the key players remain healthy for the most part. There are a handful of quarterbacks that are an upgrade from Derek Carr but the number isn’t large when you factor in that he’s only going to be 30-years-old in 2021.

He is top 10 in almost every category and he shouldn’t be undervalued anymore. If Derek Carr receives 50-100 more passing attempts in a season, his stats would really explode.

Derek Carr is putting up very good stats year-after year and they’re very consistent. The fact that the Las Vegas Raiders aren’t a playoff team isn’t on him, he is doing what a winning quarterback in the NFL is supposed to do.

The Raiders will start the season at Allegiant Stadium against the Baltimore Ravens on Monday Night Football.