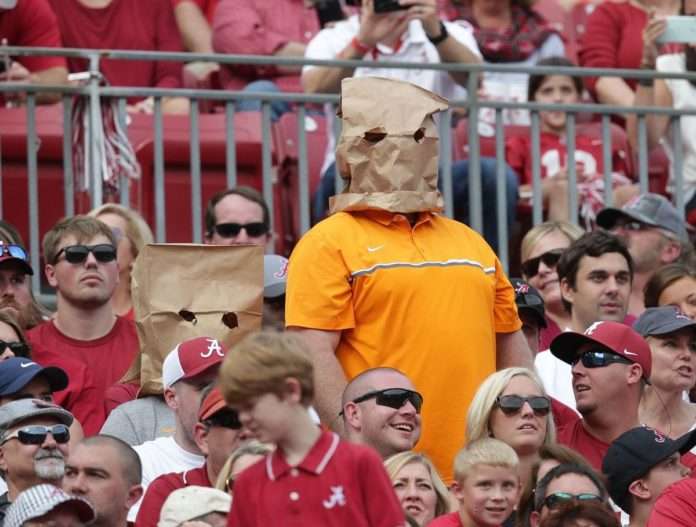 The Tennessee Vols football recruiting efforts under Josh Heupel moving forward. I break it down as I see it.

Is Josh Heupel the Tennessee Vols savior or is he possibly their biggest mistake yet?

It’s still currently ranks in at number 14 on Rivals.com. The Vols have hired UCF head coach Josh Heupel to steer their sinking ship. Heupel has had three consecutive winning seasons at Central Florida.

Tennessee will be changing head coaches again before signing day. A team can’t do this and have a good recruiting class remain intact. This may be a secondary concern with the NCAA looking to place its restrictions upon Rocky Top though.

When a coaching change happens this late, it usually results in a lost season. It doesn’t matter the reasons why.

It could be something like when Lane Kiffin fled into the night or when the team was unable to make a choice in 2017. Behaving like a 16-year-old girl unable to decide on which outfit to wear to school on Monday morning.

It takes 3-4 classes ranked in the top 5 nationally to seriously contend for a national championship. If you go look back on the last five years, you will see Alabama, Clemson, Ohio State, Georgia, and LSU every year.

If a program like Alabama or Clemson had a situation like the Tennessee Vols are having in recruiting, they could probably withstand it. You wouldn’t see the results of one irrelevant recruiting class until 2-3 years later. If they came back strong in the next couple classes, you may never even know it happened.

For the Tennessee Vols recruiting efforts though, it essentially means starting over again. For the second time in four years. I don’t expect the signed high school recruits to stay committed to the Vols.

This time it’s Jeremy Pruitt giving McDonald’s bags of money to players or that seems to be the story summed up in a nutshell or a cheeseburger wrapper.

They literally had bag men. Coach Jeremy Pruitt put the cash in bags for recruits that visited campus. Handing recruits cash in McDonald’s bags and handing the bags off as payment.

Way to go Jeremy Pruitt. You made Phillip Fulmer, who had been associated with the program for the last 53 years, just up and retire.

This picture of Fulmer must be pretty close to what his feelings were when he first found out what Pruitt did. All that’s missing is him screaming through his hand

What else was in the bag?

What else was in the bag Jeremy Pruitt? I hope they were empty bags because if there was a quarter pounder and some fries, then that’s a violation of it’s own.

It’s really not funny but melancholy laughs are better than dealing with the reality of whatever actually occurred.

To say the Tennessee Vols got sloppy with recruiting is a massive understatement. A source had confirmed Kevin Steele was named interim head coach following the burger bag business. He was even allowed to make changes to the roster but in the end he wasn’t retained by the new regime.

Steele, who was let go by new coach Josh Heupel was originally hired by Pruitt on January 12, 2021. As interim head coach he was even allowed to make on-field hirings to fill out the coaching staff before he was let go.

I thought the Vols should have gone with someone like Tee Martin as their next head coach. Instead of going with alumni or someone who has ties to the school, they chose UCF head coach Josh Heupel.

Heupel was at Central Florida for three seasons, taking over for Scott Frost when he left for Nebraska.

5-4-3, this is not a countdown, it’s how many games Scott Frost has won in each of his three seasons at Nebraska.

He led UCF to an undefeated season (13-0) in 2017. Just because he played for Tom Osborne doesn’t mean he’s the next Tom Osborne.

Coaching in the AAC isn’t the same

as coaching in the Big Ten, I guess

First the Vols hired their new athletic director, UCF AD Danny White. It didn’t take him long to hire his colleague and UCF head coach Josh Heupel to the same position at Tennessee.

During the 2020 covid season, Central Florida was 6-4 under Josh Heupel’s leadership. Now he is coaching in the SEC.

Nick Saban & Dabo Swinney haven’t accomplished what they have because of play calling or simply coaching. Don’t get me confused, most players need to be coached up but if you are recruiting 3-star talent, you can only coach them up so much.

If Alabama has the 22nd best recruiting class the next 2-3 seasons, believe Nick Saban isn’t winning anything. Talent always wins. In every sport, period……..

Josh Heupel at UCF was putting together the 60th best recruiting class in the nation when he was tagged for the Tennessee head coaching job.

You might be thinking, “As coach of the Tennessee Vols, he will be able to get better players through his recruiting efforts than what he did coaching in the AAC”.

I’m sure that’s somewhat true but how is he going to recruit against the top coaches in the SEC?

Josh Heupel’s recruiting class for 2021 at UCF was ranked 5th overall in the American Athletic Conference.

If four coaches in the AAC out-recruited Josh Heupel, what is going to happen with the Tennessee Vols recruiting, when he’s going up against Saban, Jimbo Fisher, Ed Orgeron, and Kirby Smart?

Most likely the four & five star athletes considering these programs won’t even be entertaining the Tennessee Vols recruiting efforts. If a coach can’t recruit well then he can’t win either.

This is as truthful as it gets. Just look at last year’s NFL draft and the 2021 prospects for this upcoming draft. You’ll see Ohio State, Alabama, and Clemson players littered throughout the top three rounds. Cross reference that with the top recruiting classes coming into college football every season.

College football isn’t college basketball, the top classes aren’t going to make a big impact immediately. Realistically most players won’t be game changers as true freshman. Most of them won’t start to realize their potential until about half way through their sophomore season.

How in the Flock?

How in the f#$% are the Tennessee Vols recruiting in the SEC with a coach that couldn’t out-recruit four other coaches in the American Conference?

Coaching in the AAC or in the Big Ten

isn’t the same as coaching in the SEC!

People don’t be mad at this article. Have we learned nothing. There is no excuse for the people who are running the football program, it’s different idiots making the same damn mistakes that have been made for the past 15 years.

The fans who think what Tennessee did was a good move, I’m not sure what your excuse is. You’re falling for the okie doke again.

In essence what the program did was say we don’t know what to do now. We don’t even really know who is in charge at this point.

What we at the University of Tennessee have decided to do is hand the program over to a group from a mid-major now.