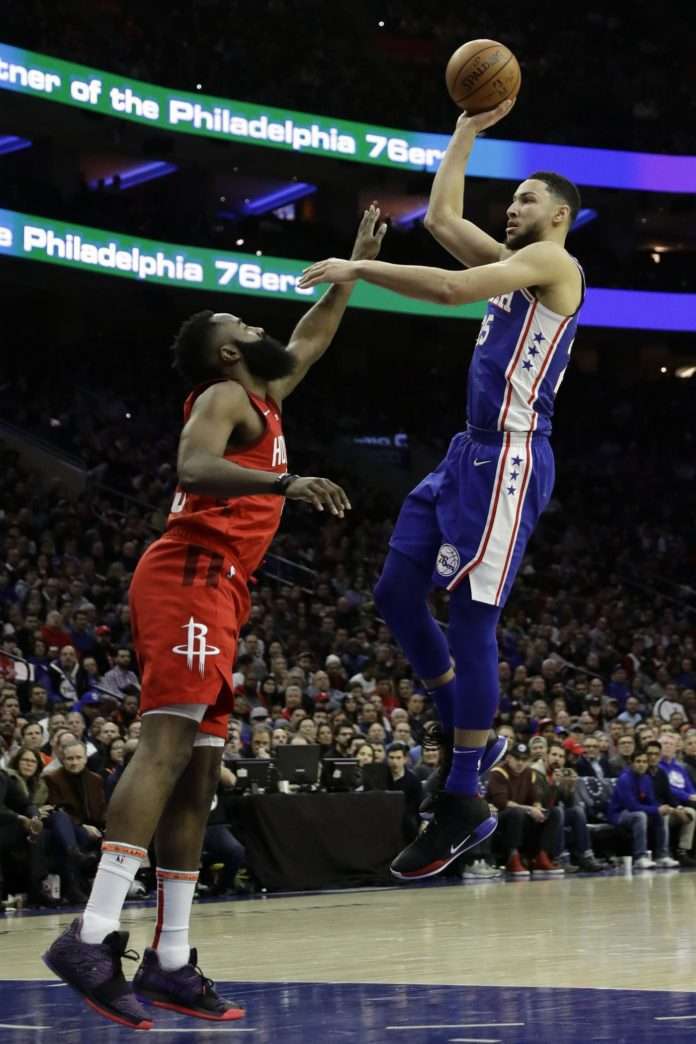 Do the Sixers need to trade Ben Simmons for James Harden? I don’t think so. It has the potential to be the worst trade in NBA history. Many won’t agree with this, let me explain why a Ben Simmons trade isn’t the direction to go.

What a Ben Simmons trade means

If the Sixers traded Ben Simmons for James Harden, they would be more versatile and prolific offensively for the next couple of seasons. Harden should still be at the top of his game for at least two more years. The 31-year-old needs the ball. He almost always needs the ball and it should be given to him because otherwise he is a liability on the court.

Chris Paul is a future first ballot hall-of-famer, who’s best skill is giving the ball to his teammates. Harden still found problems playing with him in Houston. The Sixers would be slightly better immediately record-wise because they would score more points overall.

I don’t see the Sixers seriously contending by acquiring Harden from Houston. The trade would be great for the NBA in terms of marketing strategy.

I expect if this trade happens, some Sixers games would be moved into the national spotlight. The league would benefit the most from a Harden trade. The Sixers would be more marketable nationally.

I can see it now, promos along the lines of A.D & LeBron vs. Embiid & Harden. Lakers-Sixers, Live on ABC.

In reality this is a trap. It will bring up your expectations, then it will bring you crashing down. If you’re thinking right now “Screw this guy, He’s a real F’in idiot and his opinions are just as trivial”.

That’s fine, just do me one favor, when all this comes to pass don’t look for someone to blame. You got fooled.

It will be your choice, if you choose to be filled with false hope. If you get tricked, don’t get upset and start POINTING YOUR F’IN FINGERS.

The negatives that will or can arise from trading Ben Simmons for Harden, start with the differential in age.

James Harden is 31-years-old now, and probably should have a couple peak years left but Ben Simmons won’t even reach his prime for another 3-4 years.

The Sixers would definitely be a better team overall in the short-term but would lack the money to make any other substantial moves.

Those of you who think the NBA doesn’t really have a cap, you’re absolutely wrong. The soft cap is soft until you reach a certain level, then it becomes very restraining with what is essentially a hard number. The Sixers are at this level now.

Tobias’ contract is a real killer. If the Sixers get James Harden, Tobias Harris still has the biggest contract on the team. Take that for what it’s worth.

I really don’t see the Sixers with Harden and without Simmons as a real threat. Not even in the Eastern Conference.

When Simmons reaches the start of his prime, James Harden will already be in decline. The Sixers fans are still stuck dealing with the horrific moves Elton Brand made in the summer before the 2019-20 season.

A Future of Hope

Why add more misery to the city? At least now we have hope. That hope lies in Ben Simmons developing his jump shot. If you take Simmons out of the mix, then you steal all the hope that the Sixers have for the next few seasons. Even if a lot if fans don’t realize that this is the truth, it is, and time will reveal it as such.

The truth behind everything is the Philadelphia 76ers aren’t going to be title contenders until Ben Simmons can keep defenses honest in the playoffs by developing a jump shot.

This is and always was the only way Philly becomes real contenders. I find it unsettling after all the F’in around that has happened that they would even consider this. The Sixers can’t trade Ben Simmons. Hopefully Darryl Morey won’t.

Don’t get it confused Ben Simmons with a jump shot is LeBron James. I am not overstating this in the slightest. Ben is a guard in the NBA, and he can’t shoot the ball AT ALL.

It sounds ridiculous to even say that. If you told me five years ago I’d be saying this, I’d tell you to kick rocks.

Here we are though. An NBA guard doesn’t shoot but he won the Rookie-of-the-year and is a perennial NBA All-Star. It’s both remarkable and embarrassing.

The first time Ben Simmons stepped onto a basketball court for the Sixers, they were a legitimate playoff team. Thats how good of a talent he is.

Don’t get confused about who Ben Simmons is. He laced up his kicks before his first game, and Philly has been a playoff team ever since.

What would you trade a 24-year-old LeBron James for?

Ben Simmons with a jumper, is the best player in the world by 2025.

Study this image for a second. This isn’t a joke or some unfortunate bad situation that James Harden found himself in. Hardly, Harden does this a couple times every week.

He is a horrific perimeter defender. He gets lazy, I’ve seen him hide behind a screen. A SCREEN SET ON HIM. The only thing that’s more pathetic than his perimeter defense is his defensive awareness. It’s really unexplainable. When I saw this picture I knew exactly what I was looking at.

It’s likely James went to double the post, when the big kicked it back out to the perimeter, Harden just stood there. This is a very educated guess.

Hell, it’s not even a guess, I’ve seen him do it so many times. The other team will pass it around 4-5 times and Harden will just watch from underneath the basket. I guess it’s the best seat in the house. Even Jack doesn’t get that sightline at Staples.

Ben Simmons on the other hand will most likely win a Defensive Player-of-the-Year award very soon. James Harden can fill the nets but don’t forget which end of the floor is the one that crwons champions. No superstar that didn’t defend ever led his team to a championship.

James Harden was never the best basketball player in the world and never will be. Ben Simmons has to get decent at one teachable aspect of the game to become one of the greatest all-around basketball players in NBA history. What Ben can do now can’t be taught.

If Simmons develops a shot, he will be the best in the world. The only question is whether it will happen or not. It pretty much comes down to if Ben is content with just being an all-star or if he wants to become one of the greatest players to ever play in the league.

All he has to do is want to be a legend, then put the work in to become one. The Rockets guard is a great scorer like Allen Iverson was a great scorer. He’s nothing more. Harden will start to slow down by 2023, give or take a year.

I’m hoping Sixers President of basketball operations and ex-Houston Rockets GM Darryl Morey knows better than to trade Ben Simmons. That’s what the reports are saying. I hope it’s not just a leverage move in dealing with Houston.

It’s not worth it. If Simmons doesn’t care to learn to shoot, then he is an all-star and one of the best defenders in the game and maybe Philly wonders if the Harden trigger should have been pulled.

The Sixers aren’t winning a championship without a Simmons jump shot. James Harden will not lead Philly to a title at all. All he will do is look pedestrian playing second fiddle to Joel Embiid or mess Jo-Jo up because he’s decided to not do this.

If you disagree, you’re wrong. There have been many players throughout the NBA’s history like Harden, They never win. Sixers fans be patient, they’re not winning in the next two years regardless. Harden guarantees it never happens.

Those that are tired of Ben, I ask you, “WTF is your problem”? Ben Simmons is 3-4 years from his prime. You really expect him to lead a team to a championship at 24-year-old? Patience is a virtue.

It doesn’t work like that most of the time. LeBron, Jordan, and Shaq didn’t win their first rings until they were 28-years-old. 3-4 years like I said.

A Ben Simmons trade just can’t happen at this time. If Ben learns to shoot, it’s the worst trade in NBA history. Every year it will get worse as Ben is playing into 2030.

Remember when Ben Simmons got traded for a 31-year-old defenseless James Harden, a move that improved the Sixers by 5-7 games, for a season or two?