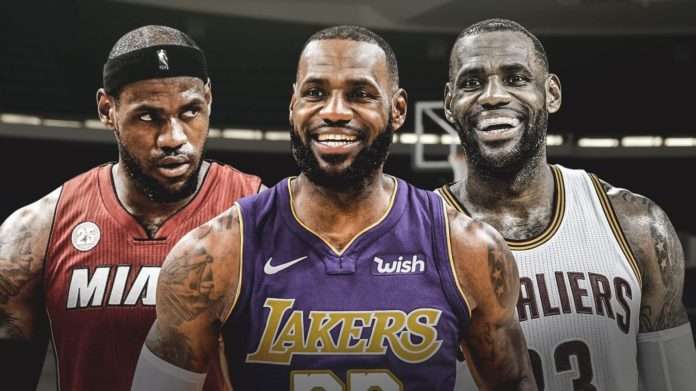 LeBron James is the best 3 ever, but there isn’t anything he can do by the time he retires to be the Goat.

Lebron James threw in the towel, quit, then asked for a restart with cheat codes, three different times. In the NBA it matters how many titles you win but it also matters how they’re won. Gary Payton won a title with Miami in 2006, it isn’t seen the same as if he would have won in 1996 with Seattle.

Many fans like to point out that LeBron James has made 9 NBA Finals appearances. Betting odds are on him to go to his tenth this year in the bubble.

Not that it matters to be the last to lose. James was the architect of his own ship. I’m just going to call it the Bron boat. Abandoning ship just as it’s sinking.

Taking all the life jackets with him and setting sail his Bron boat into new and different waters.

Changing teams when things go bad and forming super teams isn’t what a GOAT does.

You can’t really expect to stack the deck like this and get full credit for your accomplishments?

Great players not on LeBron’s level could’ve done this and won titles too.

“Hey check it out, LeBron bailed on his team for a third time, Can you believe how many Finals he’s played in”?

Lebron James threw in the towel, quit, then asked for a restart with cheat codes 3 times

What if Kobe went to SAS?

How Many Titles does he have?

What if Kobe Bryant went to San Antonio in the summer of 2004. How many rings are we talking about Kobe having? Where would it rank him all-time?

After 2004 the Lakers didn’t have a good team. They were just bad. Kobe signed a new contract with HIS team anyway.

From 2005-2007 Kobe was at his individual best as an athlete. He was in his prime. I don’t say that because his scoring supports it, even though it does. Fans now-a-days think stats are a tell-all on who a player was.

He was playing with Smush Parker and Kwame Brown, that definitely attributed to Bryant’s increased scoring.

What was he going to pass them the ball? Come on now. The Lakers might have been losing but Kobe went with the best option he had for success. Not letting Kwame Brown shoot or even touch the ball, if possible.

A player who wants and works to be great, his best years are from 27-32, give or take a year or two. It’s when the mental and physical game merge at their peak.

A players time and experience creates knowledge that can only be gained through learning. Like in anything we do in life.

Bryant had some great moments in those lean years. In 2005 the Lakers won 34 games. In 2006 the season Kobe dropped his historic 81 points, L.A took the offensive juggernaut that was the Phoenix Suns to a game 7 in the 1st round of the playoffs.

Bryant lifted his team upon his shoulders and took them as far as a single player could. He didn’t leave and create a superteam with an easy button. He remained at Staples and never pressed that easy button.

The mamba mentality wouldn’t let Kobe quit and take the easy path. His Integrity got in the way. Bryant didn’t want to team up with players like Tim Duncan and Kevin Garnett, he wanted to beat them. Destroy them if possible.

It wasn’t until the 2007-08 season that Bryant started to get fed up and publicly talked about possibly seeking a trade. That wasn’t what he wanted.

What he wanted to do is light a fire under the asses of the Lakers front office. He expected help after more than 3 years of putting in work to make the Lakers substandard.

The public display was a way to let the organization know how serious he was about winning and losing.

Kobe Climbs Back Up the NBA MountainTop

The Lakers acquired Pau Gasol from Memphis during the 2008 season. The new look Lakers went from limited and barely average to the top of the western conference. They won 57 games before losing to Boston in the NBA Finals.

In Kobe and Pau’s 1st full season together in 2009, the Lakers won 65 games. Reaching the mountaintop with the first of back-to-back championships.

Bryant could have left after the Shaq and Kobe era was over. He knew when he signed his contract prior to the 2004-05 season that L.A was going to have to rebuild completely.

When Kobe Bryant re-signed with the Lakers in 2004, he easily could have joined many title contending teams. Kobe just wasn’t built like that. The titles he could have won wouldn’t have held the same historic importance, or merit the same significance that his last two rings do.

I find this whole argument repetitive, idiotic, and time consuming. Is LeBron better than Michael Jordan? How many championships does LeBron need to be considered better than Jordan? This is not an intelligent way of looking at things.

There are aspects of the two historic players games, that if it was a tale of the tape, LeBron would have the advantage in some areas over Michael Jordan. LeBron is the best small forward ever but he’s not better than Michael Jordan overall.

He has an advantage in rebounding and passing, along with size. No one had ever been the size of a power forward with the game of a point guard until LeBron James. Only Ben Simmons possesses the same skillset as James in terms of size and athleticism.

Mike set the NBA Finals record for assists by a non-point guard with 11.4 per game in 1991. That record still stands today.

After defeating the title favorite TrailBlazers in the West Finals, the Lakers were expected to defeat Chicago easily.

The predictions were almost unanimous that L.A would beat the Bulls, the way Chicago ultimately defeated them.

In the past players didn’t leave their teams just because they wanted to chase rings.

Hakeem Olajuwon dealt with great strife and turmoil in Houston. What Dream did was create the greatest post game known to the game.

He stayed the course until choke city was known as clutch city. He didn’t tuck tail and run.

Patrick Ewing and Karl Malone never won titles but they could have using LeBron’s approach.

Lebron James has had some historic moments and seasons.

James was clutch in his first playoff series vs. Washington in 2006. In 2007 he led Cleveland to the Finals, and in 2008 had a historic game 7 against Paul Pierce and the eventual champion Boston Celtics.

James was on the rise at this point. He was earning respect the way the legends before him did.

LeBron was in the early process of becoming one of the greatest players of all-time. He was living up to the monumental hype placed on him when he was in high-school.

I think LeBron should have made the finals when the Cavs lost in 6 games to Dwight Howard, Hedo Turkolgu and the Orlando Magic.

I’m not sure what happened in 2010. I assume he had moved on mentally from Cleveland before the actual season ended and his contract expired.

After taking his talents to South Beach, it turned out Dirk Nowitzki didn’t care how many rings LeBron had predicted the Heat would win.

As the song goes, “You might win some, but you just lost one. Nowitzki is another player that stayed the course and eventually led his franchise to a championship.

This means more to history, the player, and to the fans. LeBron left Miami the same way he left Cleveland four years earlier.

Metaphorically packing up the Bron boat in the middle of the night again. With Dwayne Wade and Chris Bosh’s superstar status in jeopardy, LeBron abandoned ship again. This is the main reason I believe deeply that no matter what LeBron does he can never be considered better than Michael Jordan.

So Many Players could have done what LeBron did

So many players could have done what LeBron did, if their integrity allowed them to do what LeBron did. It’s an accomplishment losing 6 out of 9 NBA Finals, I guess. It means you’ve won 3 titles.

A fourth should be on the way for LeBron in Los Angeles. Where he’s teaming up with Anthony Davis. A championship looks to be just over the horizen.

Really though, so what. What would his career look like if he never left Miami? I wouldn’t penalize him for leaving Cleveland the first time, if that was the only time.

How long would it have taken Miami to re-tool?

If LeBron had stayed in Miami, how long would it have taken the Heat to re-tool? With James as the cornerstone and Riley and Spoelstra making the moves.

I say three years at most. There are many stars in the NBA who would have loved to play with a legend, while making Millions, chillin in South Beach.

What James accomplished in 2016 is the seminole moment of his career. Many thanks have to go to Draymond Green. Without Draymond’s antics on the court, the 2016 championship most likely doesn’t happen.

Green’s play helped LeBron win that ring, his performance was as effective as any player who has helped James win a title. In Draymond’s defense, he may have just forgotten he was on the team that was about to go up 3-1 in the finals.

Bron played great in the 2018 Eastern conference playoffs and prior to that he played hard in the 2015 Finals.

LeBron’s the King – Mike’s the GOAT

None of this puts LeBron James anywhere near Michael Jordan as a champion though. He could become the NBA’s all-time scorer. I’d be shocked if he didn’t.

He’s a legend, who has spent half his life in the NBA. It’s still an amazing feat. Barry Sanders is behind Frank Gore in all-time rushing yards. Doesn’t mean Gore is better than Barry, does it? OF COURSE NOT!

LeBron could win 8 rings and it doesn’t put him above Michael Jordan, because of how he accomplished it. LeBron is not better or greater than Michael Jordan was.

Many players could do what he did if they quit on their team and started over every few years equipped with a new crop of the game’s top talent.

LeBron James is the best small forward ever, and a top 5 player all-time. He could be 2nd, 3rd or 4th, based on whose doing the rankings.

Many of these people who say James is better than Michael Jordan, never really saw Mike play.

If they took time to watch these games and understand the storylines that were involved, many would change their views. Instead we get people pretending to be experts but only really are informed on half the story.