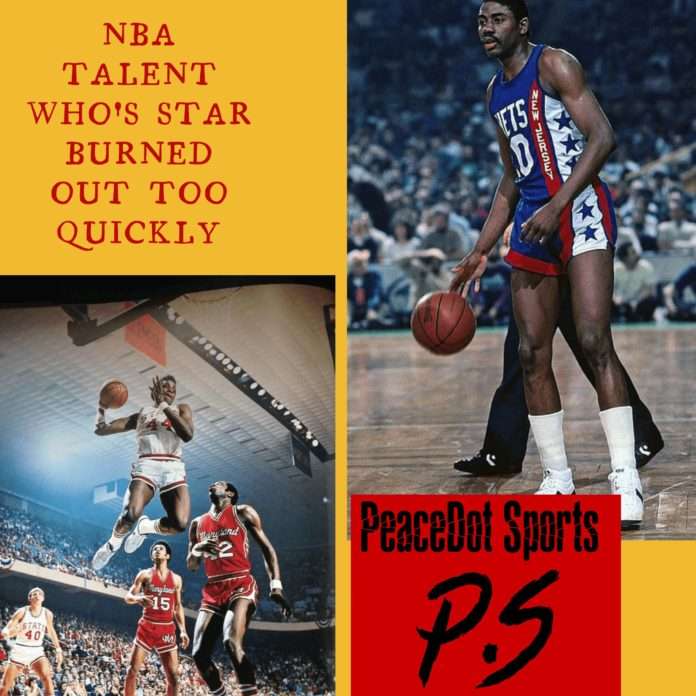 David “Skywalker” Thompson 48″ vertical leap & the NBA stars that burned too quickly. Elite NBA Talent, shooting stars from the past, that may be pretty much forgotten today.

Players whose careers were cut short because of different issues, from drug abuse to injury and in some cases a mixture of both. These players aren’t ranked.

A player like Len Bias did not qualify because he never got a chance to play in the NBA The players I’ve listed proved how special they were in the league. They’re all multiple time All-Stars. Substance abuse or injury ended these players’ careers early.

You may think of other players and tell me I’m crazy for not including them. There is a good chance the player you’ve thought of will be on another list.

Standing at 6’4 and 195lb, David Thompson was the 1st pick of the 1975 draft. The Atlanta Hawks in the NBA and The Denver Nuggets of the ABA both selected him 1st overall. Thompson chose to go to the ABA.

David “Skywalker” Thompson stood 6’4, 195 pounds and he was a high flying act, with a 48 inch max vertical leap and a 44 inch standing vert.

If Thompson never played professional basketball, he would still be a legend for what he accomplished in college. At North Carolina State, David led The Wolfpack to an undefeated 27-0 record in 1973, but they were on probation and unable to compete for a championship.

The UCLA Bruins, the goliath of the collegiate game would win 7-of-8 national championships between 1967-1975. The reason it wasn’t 8 straight titles was David Skywalker He led NC State to a double-overtime National Semi-Final victory over UCLA, avenging a earlier season defeat at the hands of the 6-time defending champions.

David Thompson along with teammate Monty Towe were the innovators of the Alley-oop. Taking advantage of Thompson’s leaping ability.

Thompson’s hops were so crazy that he held the Guinness Books World Record for his vertical leap.

Michael Jordan was a hero and a role model to millions around the world. What Jordan meant to his fans, that’s what David Skywalker meant to a young Michael Jordan. He patterned his game after Thompson’s.

When Jordan got inducted into the Naismith basketball hall-of-fame he was introduced by Thompson, his hero.

David Skywalker led the Denver Nuggets as a rookie to the last ABA Finals, facing Julius Erving and the New York Nets. The Nets won in six games but Skywalker tried everything he could to push the series to the limit, scoring 42 points in the ABA’s last game.

As a rookie, he won the ABA All-Star game MVP and finished second to Doctor J in the first ever slam dunk contest. He was a problem to deal with, a confident jump shooter as a rookie.

David Skywalker was named 1976 ABA Rookie-of-the-year and was selected to the All-ABA team. NBA rookie-of-the-year, Alvan Adams thanked Thompson for going to the ABA in his award speech.

The Denver Nuggets joined the NBA in 1976-77 and Thompson didn’t miss a beat. The 6’4 high flying wing came into the pros with a jumper and his first step was on par with Michael Jordan’s

In 1978, Skywalker scored 73 points in a game against the Detroit Pistons, at that time only Wilt Chamberlain had scored more points in a single game. In 43 minutes, David Thompson took 38 shots from the field and scored on 28 of them, as well as hitting on 17-20 free throws. 28/38, 73.7% from the field.

Kobe Bryant is the only player to surpass Thompson’s 73 point night, in 2006 he scored 81 points against the Toronto Raptors. He shot 28/46 and 18-20 from the charity stripe.

The difference mainly being that Kobe hit on 7 three pointers and in 1978, there wasn’t a 3-point line in the NBA yet.

Injuries and a substance abuse ended Thompson’s career prematurely. He could do everything on a basketball court that you want from an elite wing player. Skywalker was inducted into the Naismith basketball hall-of-fame in 1996 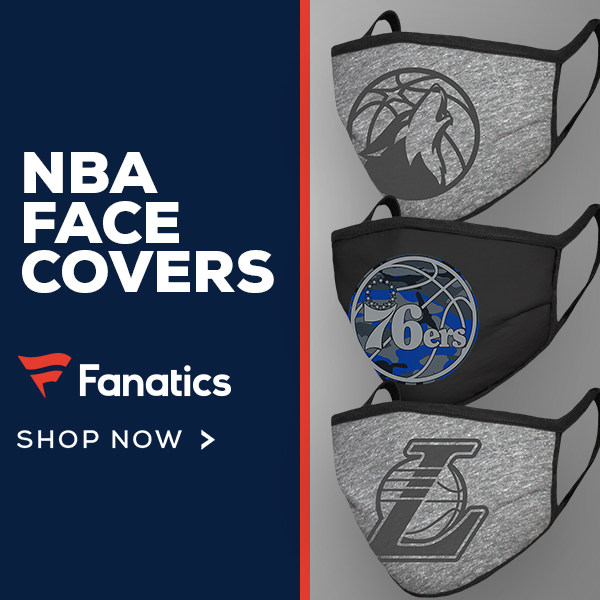 Andrew Toney was drafted 8th overall in the 1980 NBA Draft out of LA-Layfayette. The 6’3 178LB. shooting guard was tough, confident, had a quick first step and a deadly pull-up from day 1.

Coming off the bench mostly in his first two seasons, Toney shined for the 76ers in his role.

In the 1982 NBA Playoffs, Toney nicknamed The Boston Strangler for his tendency to kill the Boston Celtics, played about 10 more minutes a game compared to his time on the floor during the 1981-82 regular season.

The added time on the floor proved to be a phenomenal move by head coach Billy Cunningham as Toney was second in scoring for Philly with 21.8 PPG en route to The Sixers going to The NBA Finals. Julius Erving led the team with 22.0 PPG.

In the 1982-83 season kicked off The Sixers who had lost in the NBA Finals in 1977, 1980, and 1982 did two things. First they signed NBA MVP Moses Malone and they placed Andrew Toney into the starting line-up at shooting guard.

The Sixers won the 1983 NBA Championship with utter dominance, only losing one game in the Playoffs. Sweeping the Los Angeles Lakers in The Finals. Avenging the losses from 1980 and 1982.

Malone was the missing piece to Philly’s title but it can be said without the drafting and shooting of Andrew Toney, The Sixers may not have won it. That’s how important his shooting was for Philadelphia.

The Boston Strangler was an All-Star in both 1983 and 1984. As 1985 started off like the previous two seasons a foot injury sidelined Toney 6 games in.

Sixers owner Howard Katz thought his All-Star wasn’t really injured and belittled Andrew and repeatedly stated he thought he was faking after getting paid.

Toney tried to play with what turned out to be stress factures to the navicular bone on both feet. He only played 87 games in his last 3 seasons before retiring at 30.

Charles Barkley said Toney was the best teammate he ever had. Larry Bird called him the most clutch player he ever faced while Danny Ainge said when asked who he worried about most come playoff time “Not Magic or Dr. J, it’s Andrew Toney that keeps me awake at night!” 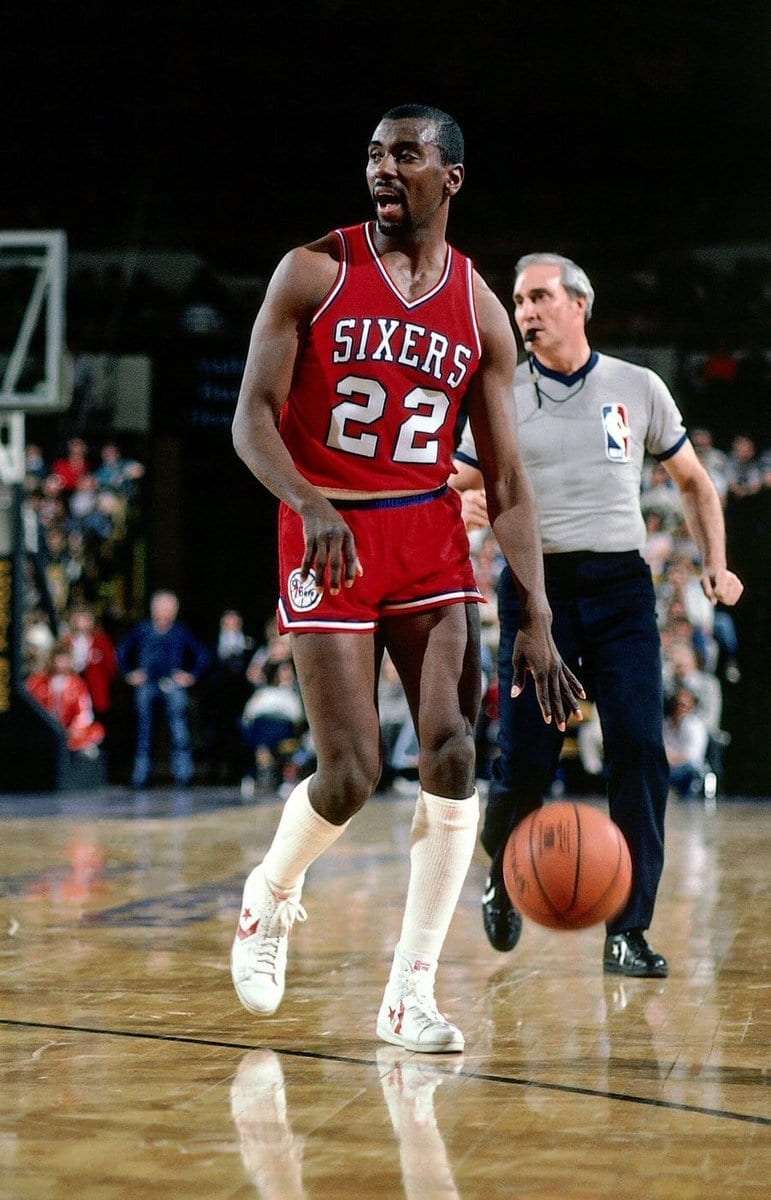 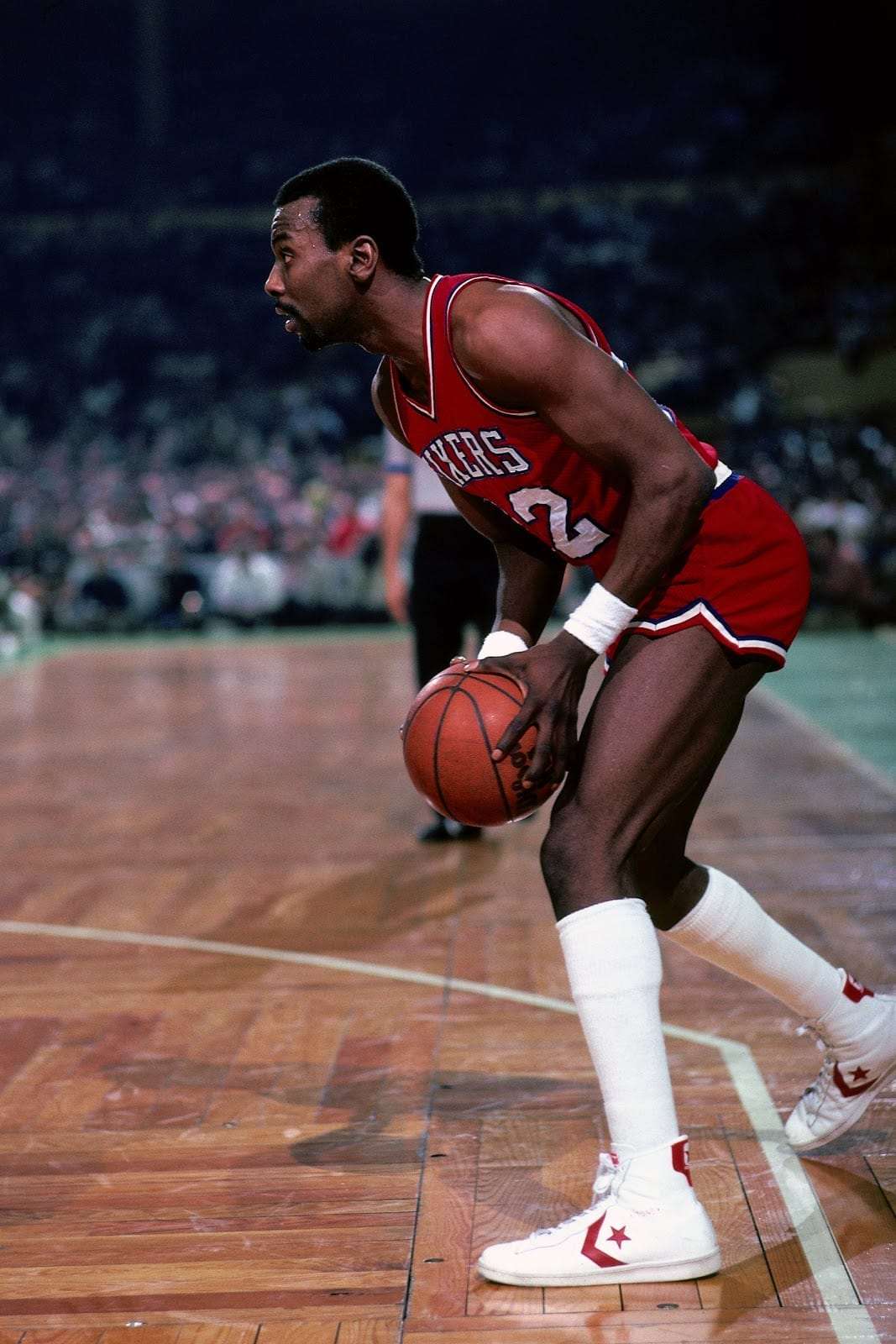 Micheal Ray Richardson (his name isn’t misspelt) was drafted by The New York Knicks with the 4th overall pick in the 1978 NBA Draft. The 6’5 189lb point guard who also played the 2 guard in his 2nd and 3rd seasons was a shorter Magic Johnson with All-defensive team skills defending on the perimeter.

Nicknamed “Sugar” because his game was so sweet. Richardson led the NBA in assists and steals in 1979-80.

Richardson led the NBA in steals three times and was selected 1st team All- defense twice.(1980-1981)

His 2.63 steals per game average is 2nd best in NBA history.

A shy kid not used to the big city, Richardson acclimated himself to the big apple rather quickly. The night life more specifically became his go to move.

Sugar Ray’s play on the hardwood made him a star. His off the court partying is the stuff of legend.

As a member of The New Jersey Nets in 1984, Richardson led his team as they upset the heavily favored defending NBA Champion Philadelphia 76ers.

In 1986 the NBA issued a lifetime ban to Richardson for failing a 3rd drug test. Testing positive for cocaine.

He continued to play ball in Europe for quite a while as he got clean. 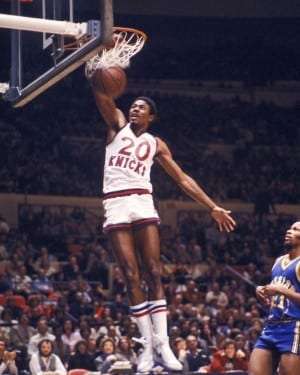 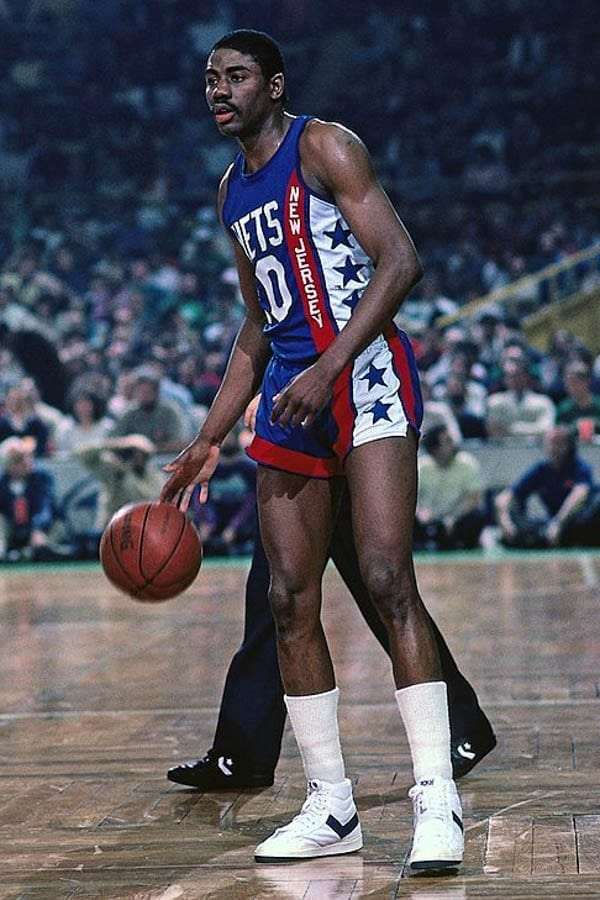 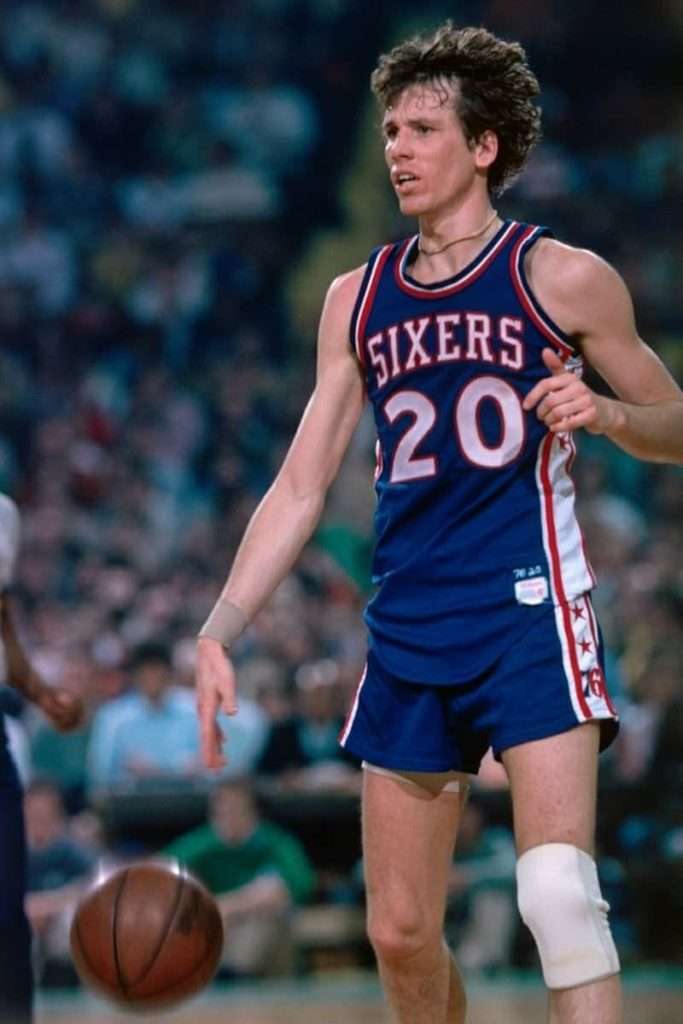 Doug Collins was the first overall pick in The 1973 NBA Draft by The Philadelphia 76ers. The 6’6 shooting guard was expected to be a prolific scorer and that’s just what the was.

Collins could shoot and put the ball on the floor and finish at the cup.

The 1977 Philadelphia 76ers were favored to defeat The Portland Trailblazers in The Finals but after winning the first two games of the series, Philly dropped 4 straight.

Today that exciting Sixers team would be said to possess a big three with Julius Erving, George McGinnis, and Doug Collins.

In 1979 Collins began to have foot and left knee trouble that would end his career prematurely in his prime at age 29.

Chenier was a perimeter problem that helped make The Bullets one of the best teams of the 1970’s.

Phil Chenier suffered a season ending back injury in 1977-78. He wouldn’t retire until 1980 at age 30 abd was never a factor on the court again. 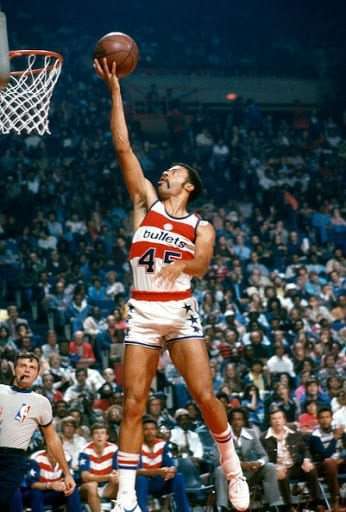 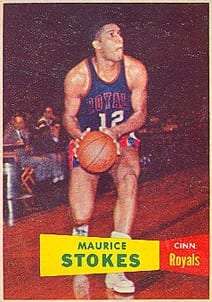 Maurice Stokes was the 2nd overall pick of the 1955 NBA Draft by The Rochester Royals.
Stokes played three seasons in the NBA.

He won rookie of the year and was an All-Star each season. Stokes was also named to the 2nd Team All-NBA all three years.

In the final game of the 1958 regular season Stokes was knocked unconscious when his head hit the backboard. He was revived with smelling salts and finished the game.

After playing in his teams next game, Stokes fell ill on the team plane.
What was believed to be a virus led to Maurice having a stroke that would leave him paralyzed.

He was diagnosed with post-traumatic encephalopathy, a brain injury that damaged his motor-control center.

During his three seasons in the NBA, Stokes had more rebounds than any other player and the 2nd most assists behind Bob Cousy during this span. He is also one of only eight players to record 4 straight triple-doubles.