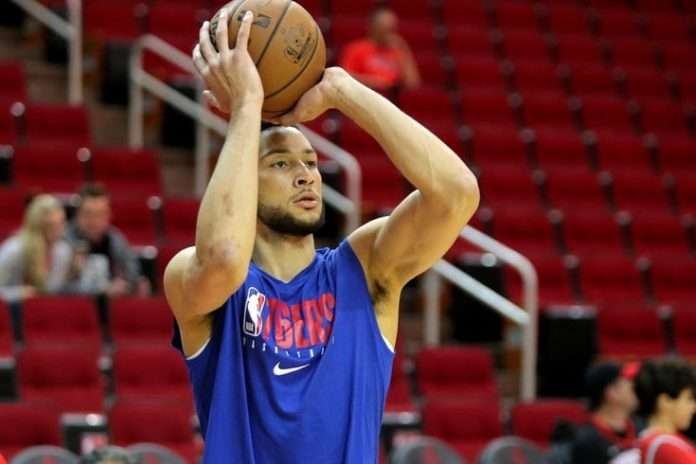 As most Sixers and NBA fans found out this week, Philly coach Brett Brown plans to move Ben Simmons to the power forward for the 2020 playoffs in Orlando’s bubble.

If Ben Simmons undergoes a position change it will render him less effective.

Are Sixers making a mistake?

Much of the media and fans think this is a great move. I don’t agree with them. This is Head Coach Brett Brown’s last ditch attempt to save his job. We will get into why I don’t think it’s a good decision shortly.

It doesn’t need to be a three pointer. A 15-18 foot pull-up would get it done. He doesn’t even have to shoot well. The shot just has to be able to show teams that he can make it with some success, respectable enough that defenses can’t cheat when guarding him.

This opens up space for Simmons, the better the shot is, the more space that will be available on the floor.

This makes Simmons teammates better as well as himself. If good NBA defensive teams or elite defenders like Giannis or Kawhi know you’re not going to attempt to pull-up, then they aren’t going to let you drive the lane.

LeBron and the Skillset

When LeBron James entered the NBA no one had ever seen a player with his skillset. This skillset consisted of size, speed, strength, athleticism, and vision in a perimeter player who was the legitimate size of a power forward.

Ben Simmons has this same skillset but not at the power forward, the Sixers aren’t looking at his history before making this position change. If a team is a high seed, their 1st round opponent might not be equipped for the NBA playoffs like the Nets in 2018. Then the series is played like a regular season game.

By the conference semi-finals that changes and the game that you play during the season has to be adaptable to the postseason.

Not shooting at all is something that will continue to prove to be an obstacle in the playoffs. The problem being that this liability will prevent Philly from winning a title until it isn’t a problem anymore. The playoffs are a game of match-ups and adjustments.

David Thompson Signed Blue Throwback Custom Basketball Jersey w/HOF'96 Buy Now
We earn a commission if you make a purchase, at no additional cost to you.

During Ben Simmons one season at LSU, head coach Johnny Jones decided to play him at the power forward spot. As a player Ben had a good season, he averaged 19.2PPG-11.8RPG-4.8APG-2.0SPG. These are nice numbers but one of many instances where stats don’t do the context of the situation justice.

The LSU Tigers didn’t make the NCAA tournament and slumped throughout the 2nd half of the season, after a healthy looking start.

I strongly believe that if LSU played Ben at point guard, they would have without a doubt made it into March Madness and The NCAA Tournament.

Here’s a video showcasing some of Ben Simmons offense from the power forward spot at LSU. You will not see any low post moves. Its posting up and going to the hole taking advantage of smaller collegiate big men, who aren’t NBA caliber talent. This won’t happen in the NBA. Not that it was successful in terms of team at LSU.

What makes Ben Simmons a truly unique talent is how fast he pushes the ball in transition and the vision he displays in doing so.

If you move Ben Simmons to the 4 you nullify this from his skillset. You nullify his greatest weapon. The other team doesn’t have to figure out how to stop what makes him special, his own team is doing it before the ball is even tipped off.

Ben Simmons is a match-up problem. His moves like the fastest and most athletic point guards but with superior size and strength.

The move to power forward

Ben simmons can be contained as a point guard because of the non-existent of a jump shot. If he could pull-up there wouldn’t be any containing him. Every player on the Sixers would benefit from this. A jumper opens up the floodgates.

Then when teams have to double him, his superior vision can take precedence. This player, this Ben Simmons has the chance to be the best player in the world. It can’t happen at power forward, this scenario only happens at the point guard position. Opponents coaching staffs have to game plan for Simmons pushing the ball, after planning for Joel Embiid.

He is an anomaly at the point. Why would you nullify the thing that keeps coaches up at night? Moving him to the 4 is an idiotic attempt for Brett Brown to keep his job.

Simmons doesn’t possess a post game. He’s not going to stretch the floor. What it does is take away him pushing the ball in transition, where he is deadly. He won’t be able to use his vision properly either. As a power forward he loses the physical advantages he has like size and strength.

He should still have a speed and quickness advantage but unlike LSU where he was still bigger than most of the bigs he faced that won’t be the case in the NBA. Simmons has LeBron’s skillset something no one before Bron ever possessed. He has a chance to win championships once he develops a jump shot.

If Ben Simmons is someday the best player in the NBA and winning titles, it will be as a point guard. The things that make Ben Simmons capable of reaching this level of greatness are taken away from him as a power forward.