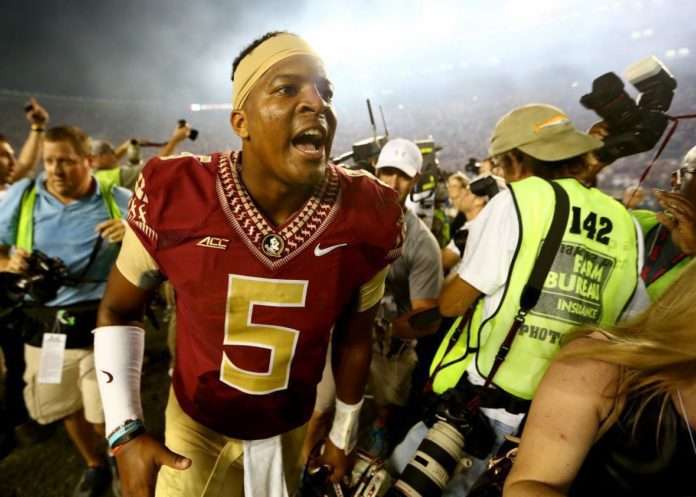 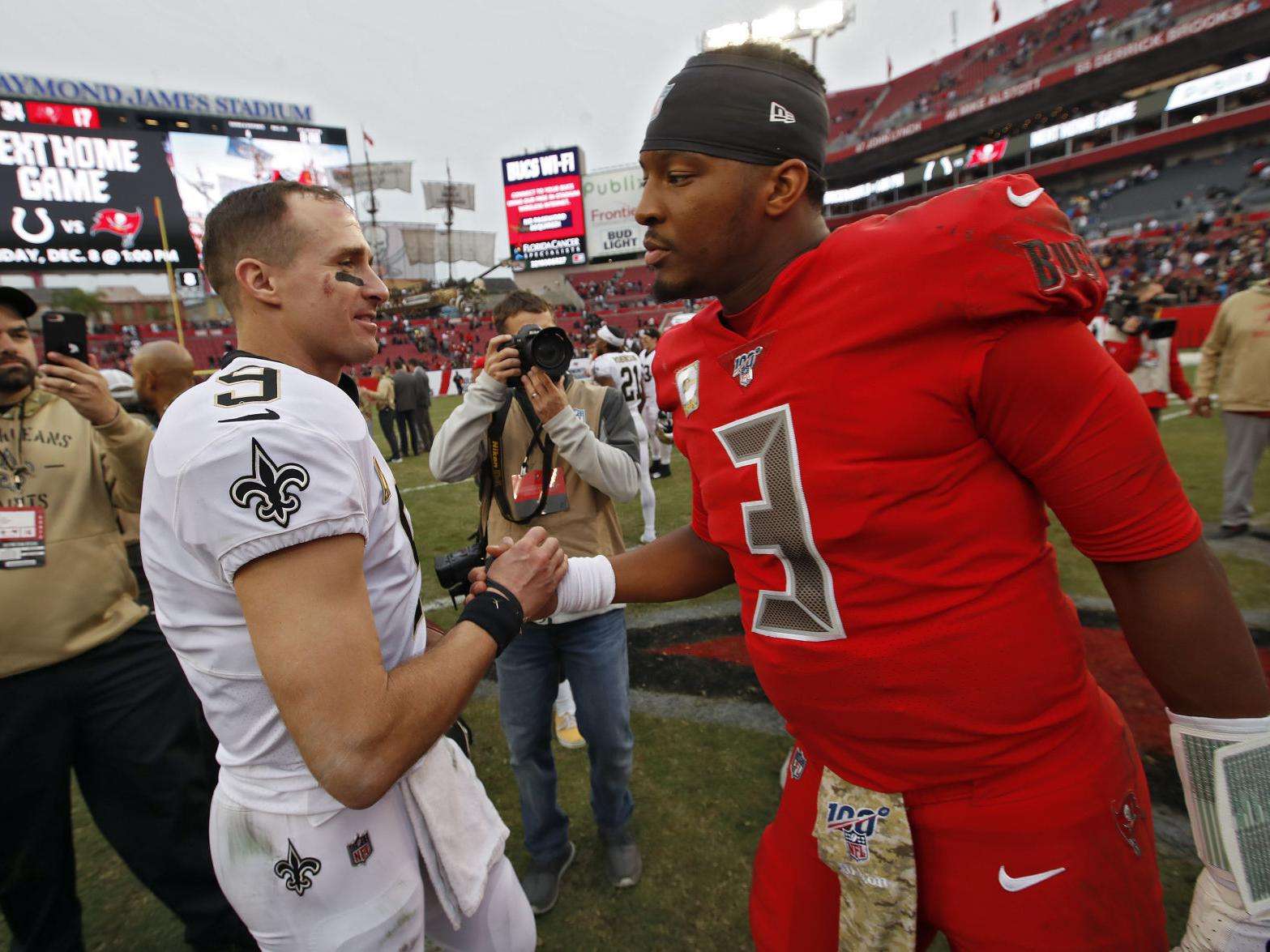 Jameis Winston and his journey to justification in the NFL after being drafted with the 1st pick in the 2015 draft has been a road of ambivalence. If you ask some people they will say he is a draft bust. I believe that assessment to be ignorant to the truth.

I believe time may turn that opinion into nothing but a foolish notion. Draft busts don’t lead the league in passing. A season that ranks 8th all-time in passing yardage. A player who in his first five seasons only has one pier in passing yards in NFL history and in 2019, finished 2nd in TD passes.

Jameis Winston made 20.1 Million in 2019 with the Tampa Bay Buccaneers. As Tom Brady takes over the Buccaneers offense, Winston was left out in the cold or maybe more suitably left out in the heat and then burned by the franchise that drafted him with the first overall pick back in 2015.

After a considerable time as an unsigned free agent, Winston signed a 1 year, 1.1 million dollar deal to be Drew Brees’ backup in New Orleans.

Some people thought that Winston could’ve ended up with the San Francisco 49ers but being with Saints head coach Sean Payton should give the Heisman Trophy winner the best opportunity to be successful in the National Football League.

The Passing and the Picks

Jameis Winston led the NFL with 5,109 yards passing in 2019. The 8th highest total in NFL history. He also led the NFL in interceptions with 30. That has to change for Winston to truly succeed. He is the first quarterback to throw for 30TD and 30INT.

Jameis Winston threw 88 interceptions during his 5 year Tampa Bay tenure. That’s too many, agreed. SO WHAT! YES I SAID, SO WHAT.

IN PEYTON MANNING’S FIRST FIVE SEASONS IN THE NFL, HE THREW 100 INTERCEPTIONS.

Unlike Winston, Peyton wasn’t considered a joke or a bust. Manning also had a running game. Edgerrin James didn’t just provide rushing but after Marshall Faulk, he was the best pass catching back out of the backfield.

Peyton threw for 5,000 yards like Jameis did but not at this point in his career he didn’t. 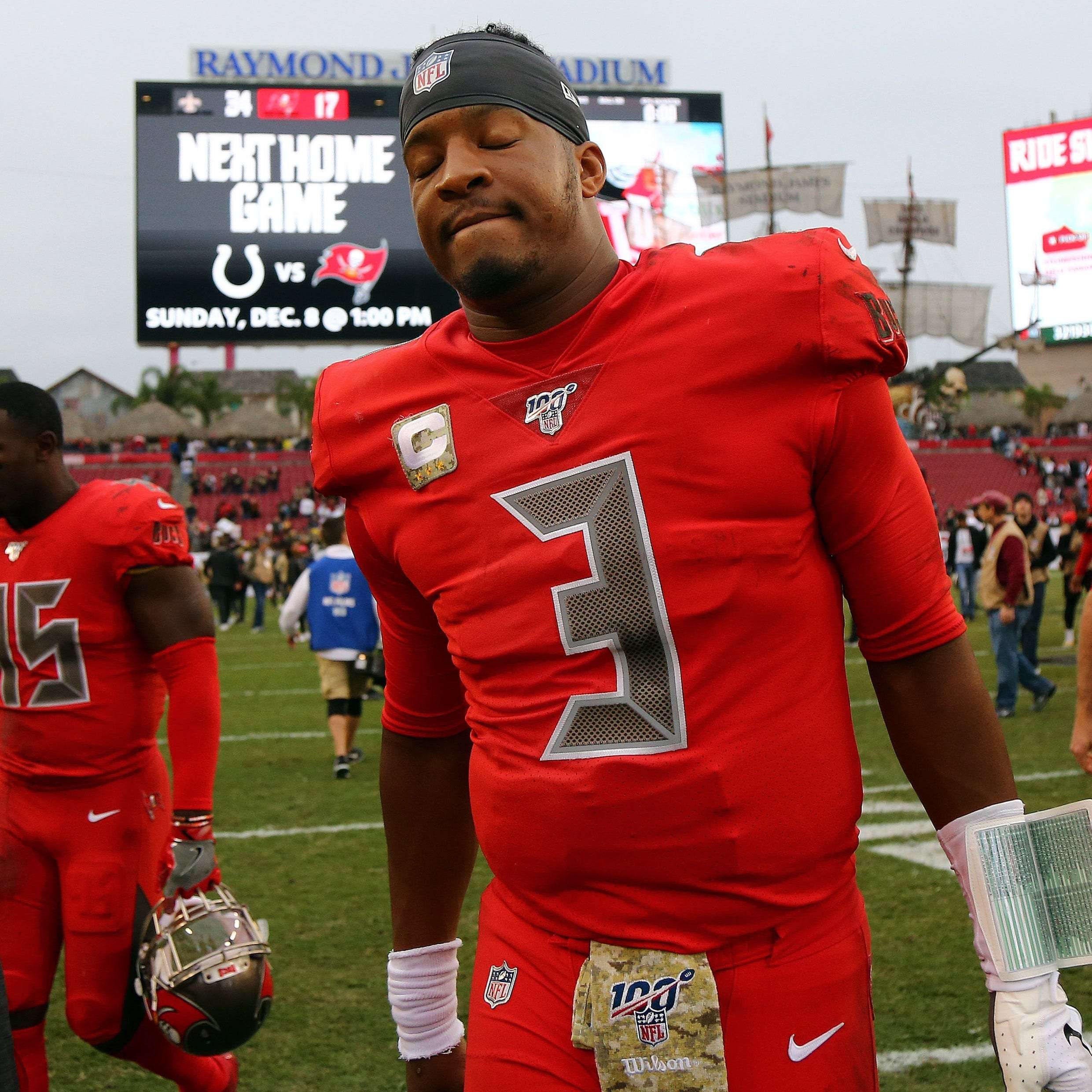 Jameis finished 2019 with 33 touchdown passes. His 33 TD were good for 2nd behind NFL MVP Lamar Jackson’s 36 Tds. Winston had more pass attempts than any quarterback in the league last year with 626. The Bucs were a team who attempted to run the ball but ultimately the ground game proved to be ineffective.

Some QBs with atleast 30 INT

All of the players above had problems with interceptions during their careers but managed to still create stellar resumes.

Four of the five listed have won an MVP and are members of Canton’s NFL Hall-of-Fame.

None of these players ever threw for the yardage that Jameis Winston has. In his three full seasons he has thrown for over 4,000 yards twice and as mentioned 5,000 yards in 2019.

In his five seasons, he’s tossed 121TD-88INT for almost 20,000 yards. Jameis Winston’s stats are troublesome in the interceptions category but his passing yards and touchdowns are in legendary status. 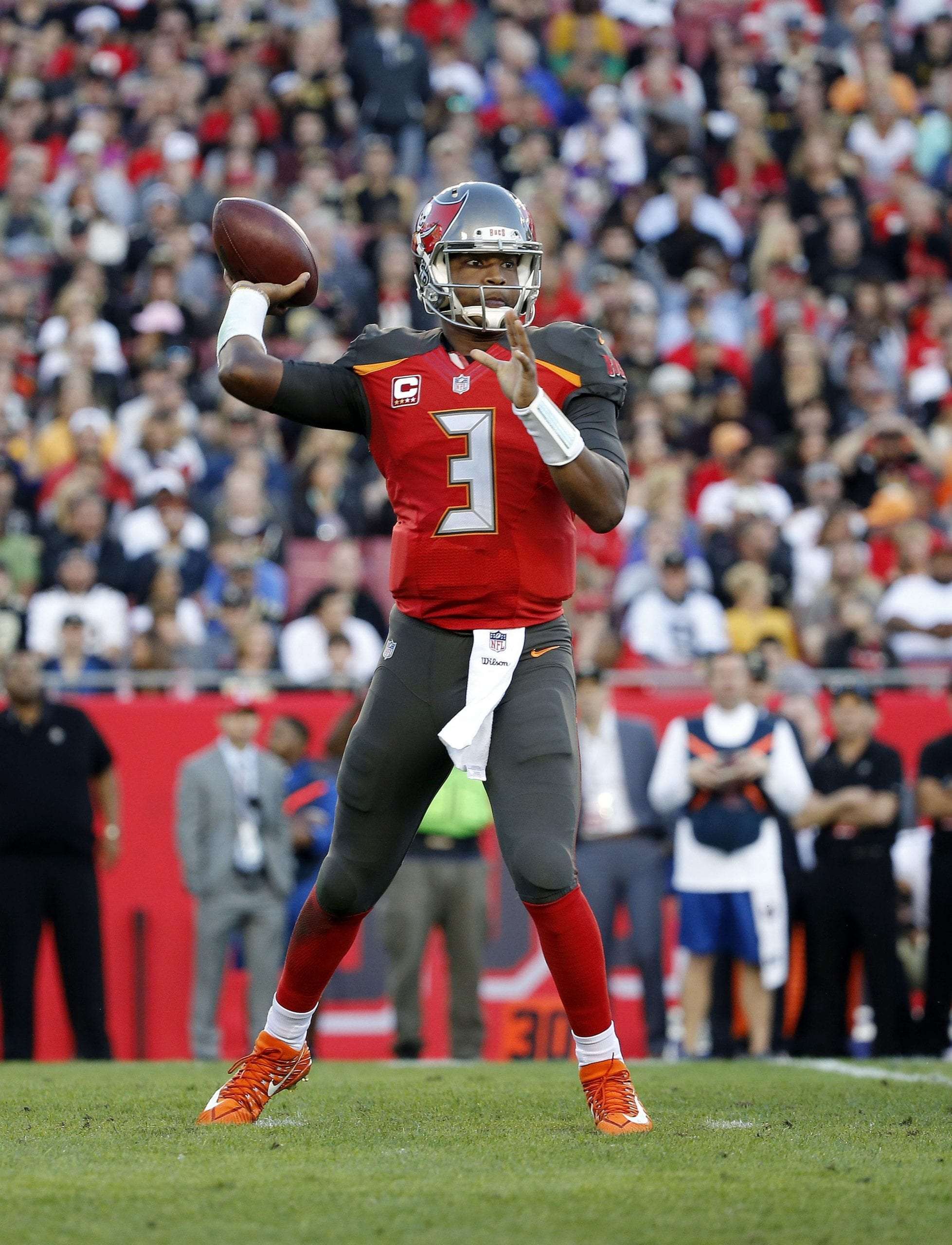 Will Winston live up to his potential

Jameis Winston will only be 26-years-old during the 2020 season. He’s just entering his prime years. The 5,000 yards, the 33 touchdowns that were good for 2nd in the NFL last season, and his 61.3 career completion percentage all say he’s living up to top pick status.

He’s been selected to play in one Pro Bowl and that was during his rookie season.

Ready To have your mind blown

I see it as absolute ignorance when people talk about Jameis Winston as if he’s Ryan Leaf. Jameis is not a bust. Yes, he has thrown a lot of picks. YES that needs to change. When it does “LOOK OUT, MAN”!

When you think Jameis Winston do you think interceptions, way to many, he sucks? If you do remember he still has thrown 33 more touchdowns-to-interceptions in his career.

On the list of passing yards for a quarterback in his first 5 seasons, Winston is #2 ALL-TIME!

Jameis Winston career stats apart from interceptions, that the sentiment surrounding him, would lead many to question if these Jameis Winston stats are really true or not.

Winston’s detractors can argue he isn’t an NFL caliber starting quarterback. Their argument would center around his 88 career interceptions. They’d probably say the yards and touchdowns don’t matter because of the picks.

You are absolutely correct? Nothing else matters if he’s going to throw that many interceptions in the regular season.

I’m saying he can fix that. I’d bet it would be easier to cut down on the turnovers than to take another quarterback and expect him to throw for 5,000 yards. You can’t teach that. You have it or you don’t. 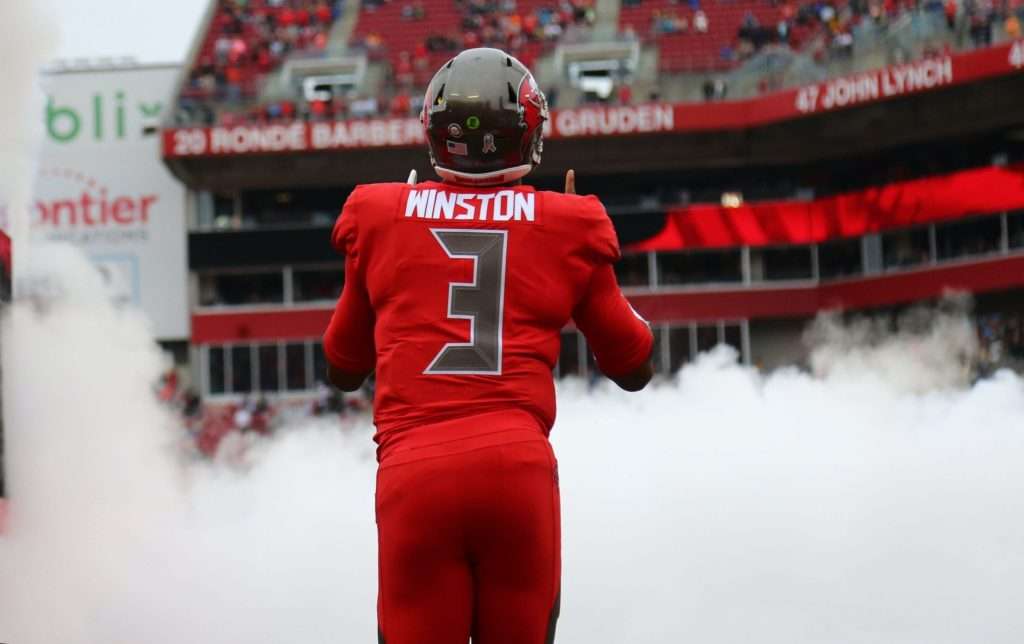 Coaching, experience, and discipline can solve Winston’s problem. You’re not taking a random quarterback and teaching him to throw for 20,000 yards in the first half decade of his career.

Jameis Winston is a gunslinger. He attacks and during crunch time, in the biggest moments, he’s clutch. It’s where he wants to be. It’s where he feels comfortable.

He see’s himself as an all-time great and you won’t convince him otherwise. He wants to change your opinion of him. He’s out to make you see him, the way he sees himself. If he fixes one facet of his game, he will do just that.

“I’m going to be the best. That’s bar none. You better check your sheet.”
Jameis Winston on if he fixes his Turnover troubles 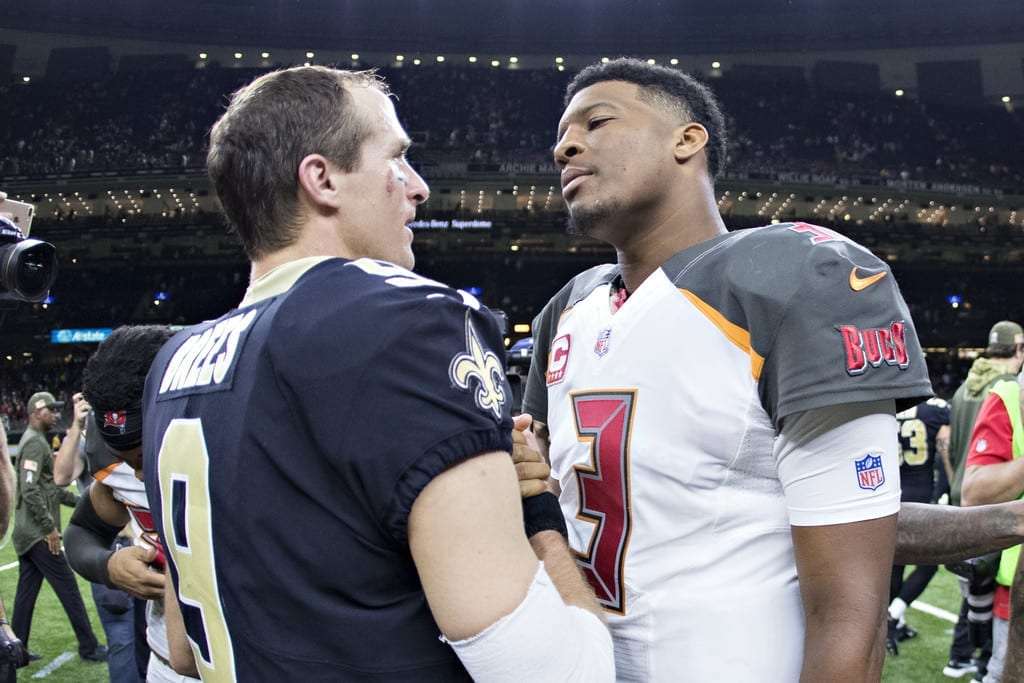 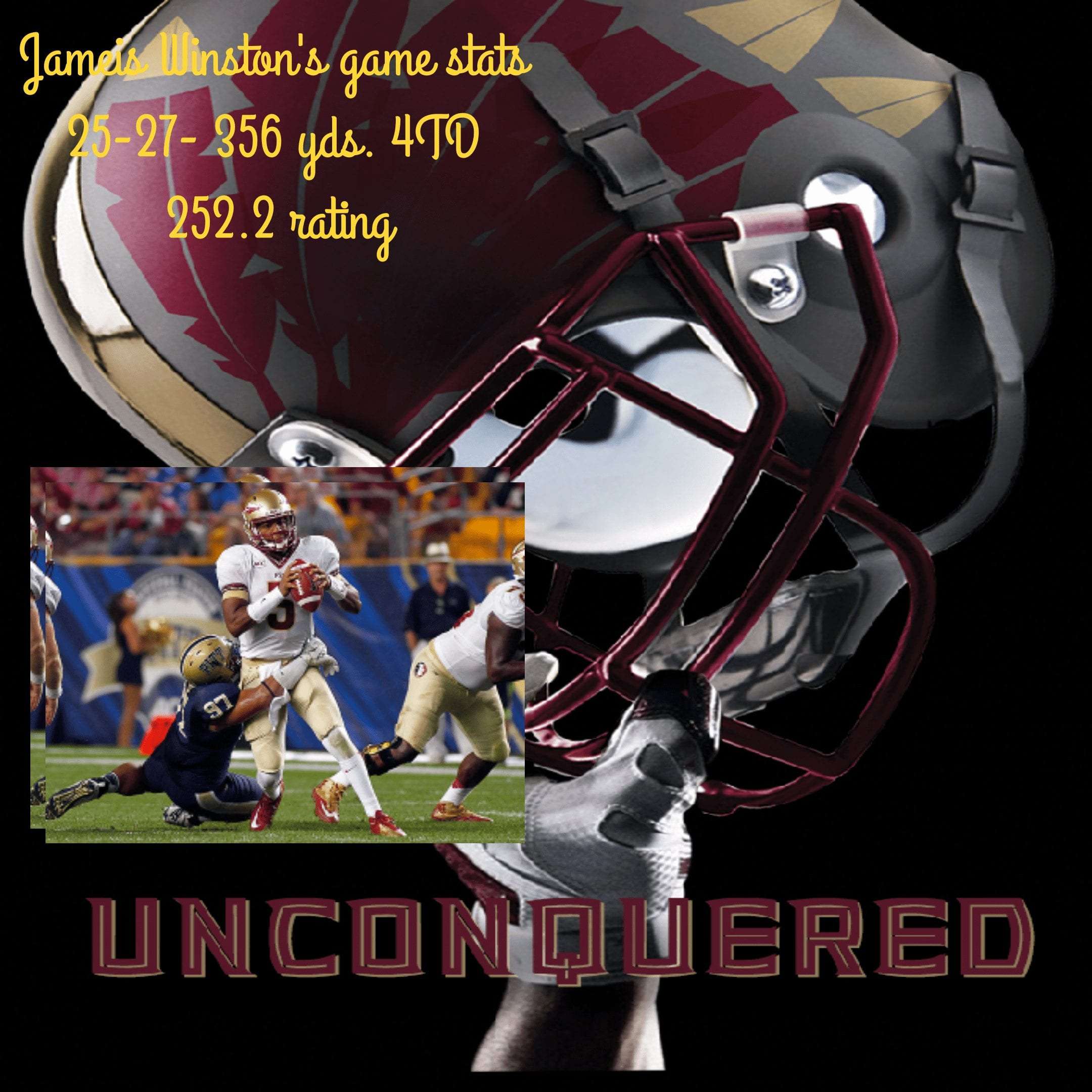 On Labor Day 2013 Jameis Winston started his first game as a Florida State Seminole. He didn’t throw any interceptions in that game. He did have more touchdown passes than incompletions though.

Jameis started 27 games during his tenure in Tallahassee. He was victorious in his first 26 contests. This Garnered the quarterback All-American honors and most of the awards that he was eligible to win including the Heisman Trophy. 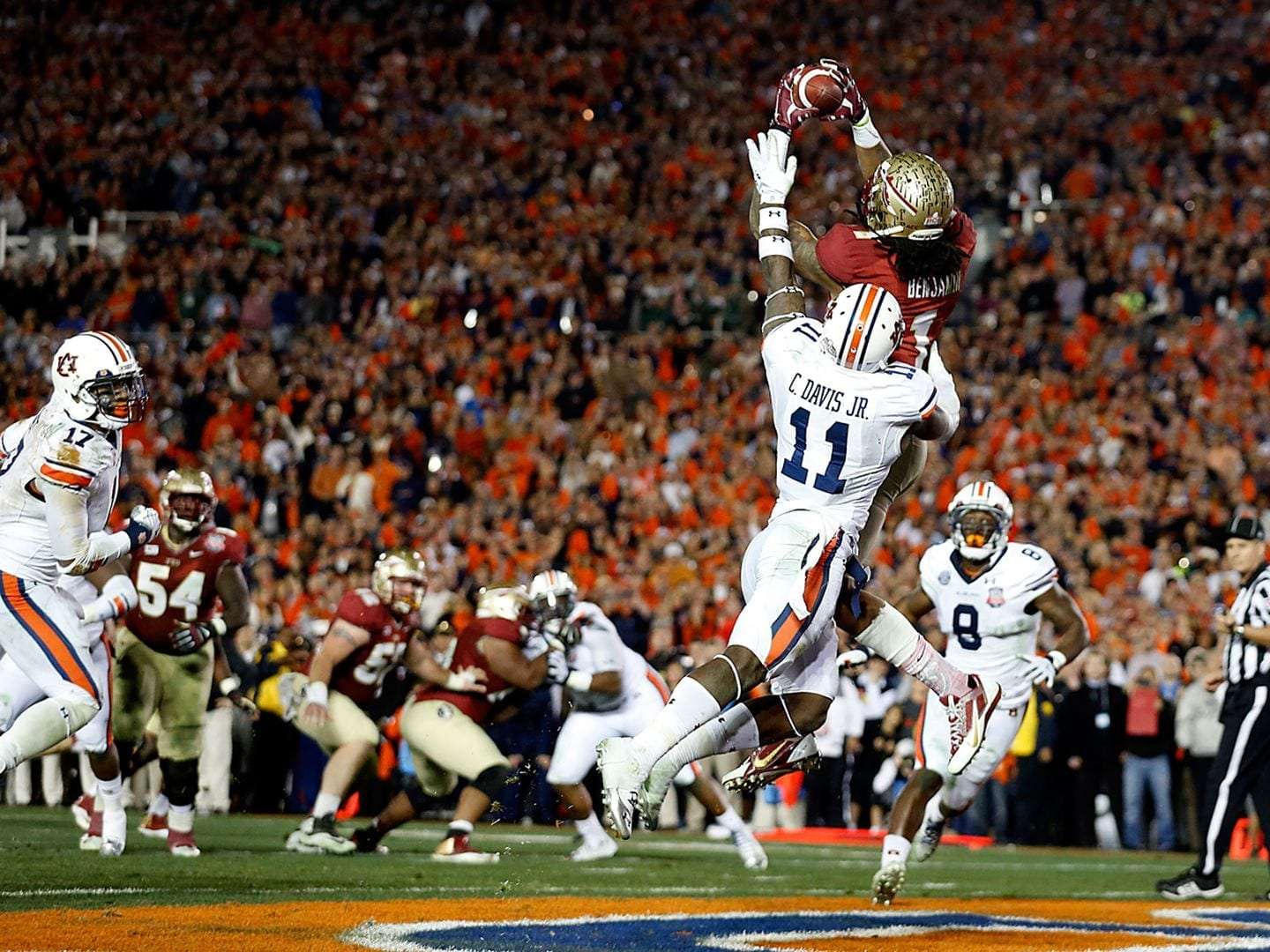 Winston was a 5-star recruit out of Hueytown High School in Alabama. After red-shirting, he started 27 games during his tenure in Tallahassee. He was victorious in his first 26 games, he was a superstar that flipped Florida State’s program and fortunes.

This Garnered him all-american honors and a Heisman trophy in his first year of playing for coach Jimbo Fisher.

Winston led Florida State to play in the last BCS national championship game on January 6, 2014 at the Rose Bowl in Pasadena. FSU had gone undefeated and unchallenged throughout the 2013 college football season.

The Noles found themselves down 21-3 with 4 minutes remaining in the 2nd quarter against Auburn in the national championship game. Jameis Winston was facing his first adversity on college football’s biggest stage.

He led his team back in the Rose Bowl on the cusp off winning a championship. The Seminoles then lost the lead in the final minute of the game.

The final touchdown that secured a National Championship for Florida State also put them in the record books as the most prolific offense in NCAA history.

No other college or pro quarterback ever brought his team back from a three score deficit, only to lose that lead and answer back in the final seconds. With the pressure of having to drive 80 yards to win the championship, Jameis didn’t get lucky on a hail mary. He went 6-7 in 1:06, on an 80 yard drive to win the NCAA championship.

No college or pro quarterback has ever led a championship winning drive with that little time left, needing to score a touchdown. 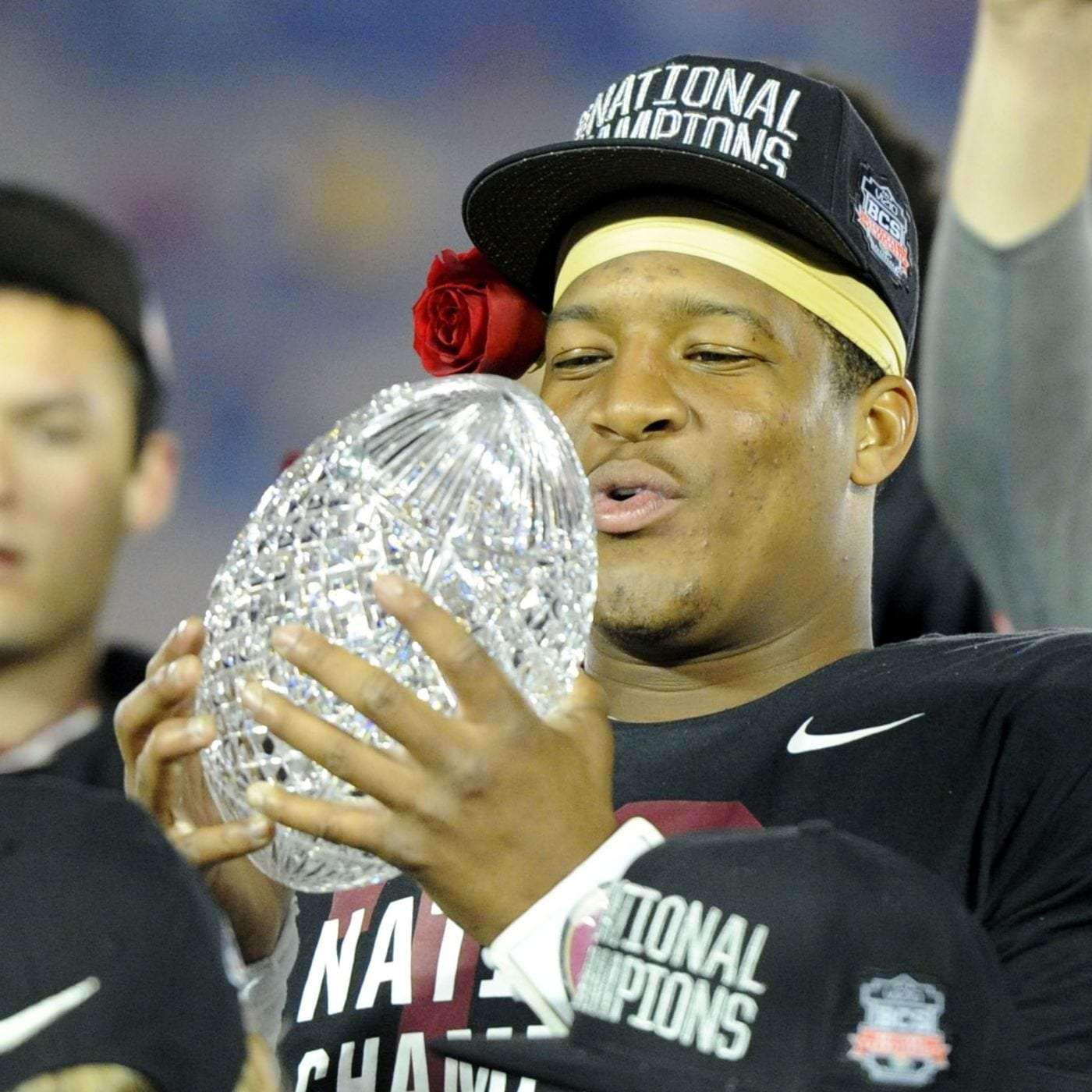 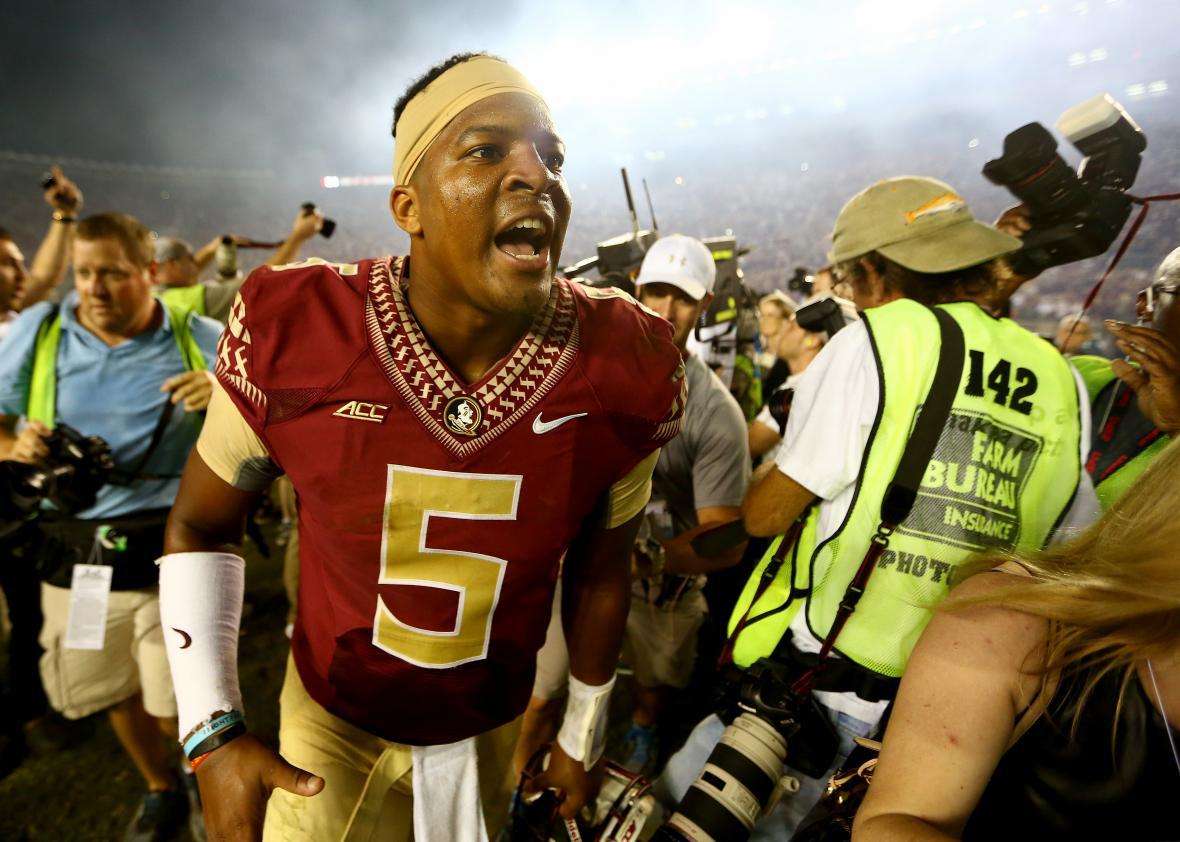 In the 2013 Championship season that garnered Winston a Heisman Trophy, he passed for 40 touchdowns and only threw 10 interceptions for 4,057 yards.

I know it’s college and not The NFL but he’s talented enough to make the transition. He’s proven it in every other dimension of the NFL game.

Now he just has to protect the ball. Jameis Winston’s career stats will look like a future hall-of-famer, if he can do that.

Winston has had lasik surgery and dropped 20 pounds since the end of last season. He also played through a broken thumb on his throwing hand and had his knee worked on.

With Sean Payton and Drew Brees’ offensive wisdom and tutelage, I believe Jameis will be one of the best quarterbacks in the NFL within a couple of years.

He’s already at the top in passing yards and touchdowns. Throughout the NFL’s history only Peyton Manning can say he threw for more yards than Jameis Winston in his first 5 seasons in the NFL.

Jameis will be out to prove everyone wrong that thinks he’s not worthy of where he was drafted back in 2015. Jameis has that Michael Jordan personality. The “I can’t do it, OK. Now watch me do it”.

The only question is will Jameis shine as a New Orleans Saints quarterback or will his ascendance to stardom happen elsewhere.

New Orleans Saints teammate Tre’quan Smith thinks Jameis is the long-term answer on the bayou. It seems like Sean Payton has faith in the 27-year-old signal caller too. Jameis has beaten out Taysom Hill to be the New Orleans Saints starting quarterback for 2021.

Time will tell what he has learned and if he will do with this opportunity.