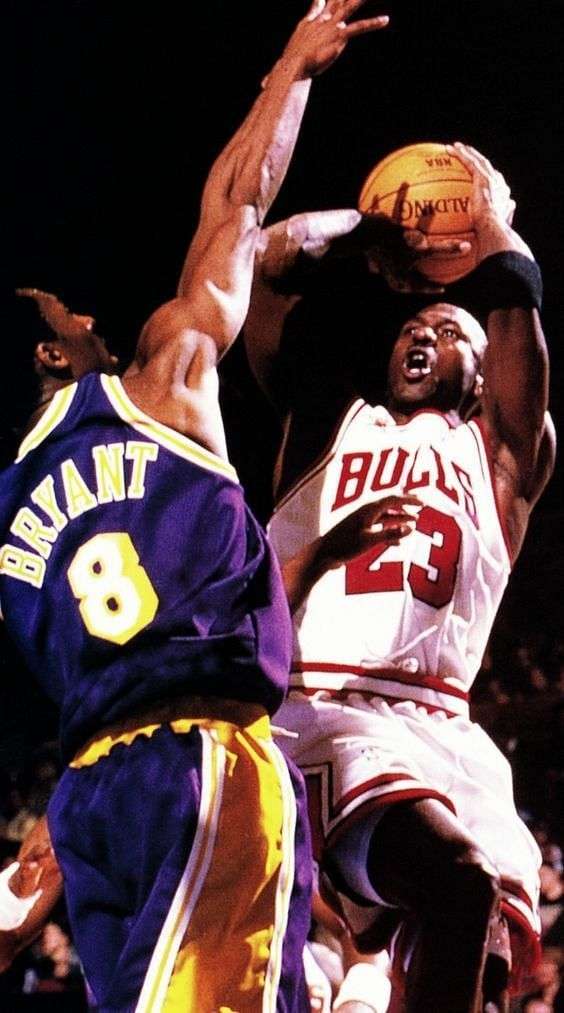 Was Kobe Bryant like Mike with his teammates? Kobe Bryant and Michael Jordan were both fierce competitors on the court. Winning was success and Kobe’s teammates had to work as hard as he did which in most cases wasn’t possible but it was the goal to strive for.

Up to 60% Off Sitewide at Fanatics!

When Kobe called his teammates soft, usually it was in their best interest. He wanted to make them better, usually. Other times he was just frustrated or was testing his teammates. Whatever the reason, you can’t argue the results.

After Watching The Last Dance, a lot of fans became turned off to how Michael Jordan treated some of his teammates.

Did Kobe Bryant treat his teammates like Mike? Was he even tougher? Does it really matter?

What they did do was win 11 combined championships in The NBA. Both players would challenge guys to find out their levels of toughness. They wanted to make sure the entire team was ready for battle.

The battle to become a championship team.

Kobe Bryant and Michael Jordan had a memorable match-up at the 1998 All-Star Game in New York City at Madison Square Garden AKA “The Mecca”.

Bryant’s “Mamba Mentality” might have existed within him when he was drafted by the Charlotte Hornets with the 13th pick of the 1996 NBA Draft but it took him time to really adjust to the NBA and become the Lakers star guard that many predicted him to become.

Jordan told ESPN’s MacMullan that he’s kept those final text messages even if they inevitably bring a tear to his eye. “He was just so happy,” Jordan said of Bryant’s final weeks of life. “He was doing so well.” The two basketball greats exchanged text messages midday on Dec. 8, 2019, seven weeks before Bryant, 41, his 13-year-old daughter Gigi, six friends and a pilot when their helicopter crashed in Calabasas , California, about 30 miles northwest of downtown Los Angeles.

“This tequila is awesome,” Bryant texted in reference to Jordan’s Cincoro Tequila which had been sent to the retired L.A. Lakers guard. “Thank you, my brother,” Jordan responded. “Yes, sir. Kobe Bryant and Michael Jordan are two of the most talented, hard working players to ever play in the NBA.

When Bryant was a teenager and coming into his own, Jordan was on his way beyond a playing career, Kobe would ask Mike for advice. How he should do this or that. How do you execute your turnaround, do you keep your legs wide?

Charles Barkley says Kobe Bryant was always respectful when their paths crossed, but it was clear to him the kid planned to go it alone.

Kobe made them Cry

In The NFL, I doubt there’s a team that doesn’t have guys fighting during training camp. If there isn’t conflict, then I’d bet that team is going to have a very high draft pick come the following spring.

Kobe Bryant has literally made multiple teammates cry. He told Slava Medvedenko, “You know, dude, you might want to reconsider what your life purpose is. Maybe it’s not this.” Kobe Bryant Los Angeles Lakers Mitchell & Ness 1996-97 Hardwood Classics Authentic Player Jersey - Royal
$299.99
Buy Now
We earn a commission if you make a purchase, at no additional cost to you.

During a Lakers practice in 2005, Kobe Bryant elbowed Sasha Vujacic and made him cry. Not sure what to do, Bryant seeked advice from a friend.

During a game in December 2005, Vujacic tried to make a pass that got intercepted, Kobe embarrassed Sasha during the next timeout. The Lakers won this game against the Wizards and after the game Kobe approached Vucacic and pulled him aside in the locker room. According to Kobe, he said

The Lakers star shooting guard gave teammate Samaki Walker a black eye in 2002 . The Lakers used to bet $100 each on who could hit a half court shot first. Kobe won the pot on this occasion and the losers were supposed to have 48 hours to pay-up. Bryant decided he wanted Samaki to pay sooner than that.

He walks onto the bus and asks Walker for his share of the money. “I don’t have it right now” Walker exclaimed.

“First of all why you coming at me for a $100″ Samaki said, putting his headphones back on.

Kobe then punched Walker in his face, giving him a black eye.

Kobe Bryant was playing in a scrimmage against his teammates as his Lakers team practice. He started off guarding Jeremy Lin and then Nick Young.

Nick said to Kobe “No one in the world can guard me”, Bryant came back with “You’re going exactly where I want you to go.”

Later during this practice, Kobe said to Young and the entire Lakers team

The soft like Charmin incident was reported by Mike Bresnahan of the Los Angeles Times on December 11, 2014. In terms of toilet paper Charmin is a good brand. It’s top notch, very soft.

When it comes to NBA basketball players being compared to Charmin softness, it’s not what you hope to be likened to. While leaving the practice court, Kobe Bryant was yelling these expletives with Lakers GM Mitch Kupchak observing. Kobe yelled to Kupchak while leaving practice, “these expletives aren’t doing expletive“.

Kobe questioned Derek Fisher’s masculinity in front of his wife and kids.

In the summer of 2012, the Lakers brought in Dwight Howard and Steve Nash. There aren’t actual quotes or footage to document the problems they had.

When Dwight Howard left, Kobe blamed him stating “the union didn’t work because Howard was soft”. I can only imagine some of the things that were said while they were Kobe Bryant’s teammates.

When Steve Nash was asked to describe Kobe in three words he said “Mother. Fucking. Asshole.”

We saw Michael Jordan get emotional about the way he acted at times during the Last Dance.

Kobe Bryant was the same way in interviews the last two years prior to his death, questioning or feeling regret towards the players he berated during his career.

If either man wasn’t this hard on their teammates, neither may have as many championships. I know the players who won rings with both historical greats are not upset about how it went down. When it was all said and done, being one of Kobe Bryant or Michael Jordan’s teammates meant winning championships.

Up to 60% Off Sitewide at Fanatics!