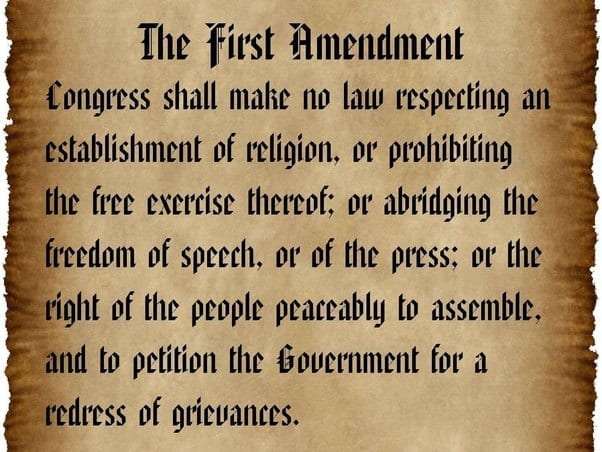 This is my take on Corona, The Church, and the Constitution.I am not an attorney and I do not believe in God. I was baptized and in my early 20’s I did believe. I’ve looked, read and even spent a month studying with the mormons and attending their 7 hour Sunday services.

I apologize if this offends believers but the way I phrase it is I grew up and stopped believing in fairy tales. What I mean is I started studying the history of the world.

During this knowledge gathering endeavor I realized what I believe now. Just one example, Christianity was originally a religion for the Jewish people who believed Jesus was what he claimed to be.

All Christian’s were Jewish. If you weren’t Jewish and wanted to become a Christian first you had to become Jewish. After all Jesus was Jewish.

Corona and The Constitution

I’m now going to get to my point. The previous statement was so people know what I’m saying is unbiased.

The first amendment states Congress shall make no law respecting an establishment of religion, or prohibiting the free exercise thereof;

No laws were passed against this. The amendment firmly states that they can not be even if those powers that be want to.

The only thing that could be done is to pass Martial Law. This has not happened. So all it takes to forcefully breach The People’s rights is a virus a little more troublesome than the Flu?

Who are we kidding anyway, most of the worry is towards the sick showing up to fast. I’ll liken it to a restaurant where there’s one waiter and 15 different parties of people all come in at once.

I don’t think its smart for people to attend church. I’ll state again I am not a lawyer. However to arrest people and forcefully shut down services is a breach of constitutional rights.

Social distancing is not a law but rather a hard suggestion. According to the 1st amendment as previously stated, it could in no way become a law.

So in a court of law what is it the police and governmental persons who are enacting these violations going to say? They’ll try to paint it as how unsafe it was. Given how I feel they’re probably right in their opinion. Does that matter?

The problem with that is there isn’t any law or precedent that backs up or supports this. If I was a lawyer defending or representing a client in a civil case I’d state these facts. It would be the only argument made by either side that is backed up by law.

Then I’d say in a climate that created intense fear my clients extreme trepidation found it imperative now more than ever to pray and worship in their church. In return the ones who were supposed to enforce the law and protect it conspired in illegal activity to make up there own rules. Rules which are illegal in the purest form of the law.