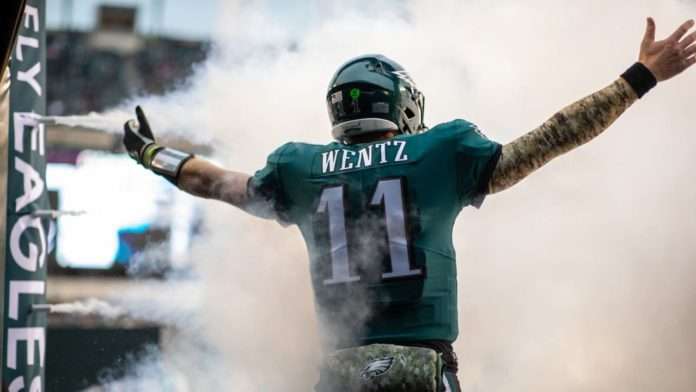 The truth about Carson Wentz and his career stats. There is a lot of hate in Philadelphia for Wentz, this is a situation that shouldn’t exist. Frankly, it’s embarrassing.

Carson Wentz and the Philly Fans

Can Carson stay healthy for a whole season

He just did! He was basically the only one that remained healthy for The Eagles in 2019. He just played 16 games throwing for more yards than any Eagles quarterback ever has.

I’m not saying Carson got hurt in the NFL playoffs, therefore, technically, he played a full season. NO NOT AT ALL.

Carson Wentz didn’t tear a ligament or break a bone. The Philadelphia Eagles signal caller suffered a concussion. It was a result of Seattle Seahawks defender, Jadeveon Clowney running at full speed, jumping onto his back and driving his head into the ground during a 2019 NFC Wildcard game.

Wentz left the game because he had to, he left because of NFL concussion protocol. If Clowney did that to anyone it would have ended in the same result. Some of the fans I think are at a point where they want to say “told you so”, when referring to Carson’s health.

Any fans who say Wentz isn’t living up to his potential doesn’t have a clue to what they’re speaking about.

Carson Wentz’s career stats are phenomenal and in some categories he has done things only the NFL’s greatest quarterbacks have accomplished before him.

In the last three seasons, Wentz has thrown for more than 20 touchdown passes with only 7 interceptions or fewer. That makes him the first quarterback in NFL history to do this three times in a row.

The QBs who have done it twice are Tom Brady, Drew Brees, Aaron Rodgers, and Russell Wilson. Carson also has the second best INT ratio in NFL history. Currently he has a 19 game TD passing streak that is the longest active streak in the NFL.

Wentz was the 2nd overall pick in the 2016 NFL Draft. In 2019, he became the first quarterback in Eagles history to throw for over 4,000 yards in a season.

Still many are disillusioned with Wentz being the quarterback in Philadelphia. Carson Wentz keeps putting up career stats.

This passing accomplishment came with him throwing to practice squad players who aren’t even real NFL caliber talent. His left tackle was injured and All-Pro Tight End Zach Ertz was M.I.A, along with rookie running back Miles Sanders.

Carson Wentz’s career stats and accomplishments would have included an NFL MVP award if he didn’t tear his ACL in December 2017. The same year the Philadelphia Eagles won their first and only Super Bowl championship by defeating Tom Brady, Bill Bellichick and the New England Patriots.

Do some of you out there think The Eagles were so physically talented that Trent Dilfer could have delivered a Super bowl for the birds? That wasn’t the case. The only surefire future HOFers on the team were Fletcher Cox and Jason Kelce.

Carson Wentz MVP? He would have won the award in a landslide and still received two first place votes in spite of games missed. He did win the Bell POY award.

The reason he got MVP votes and won the second most important offensive player award was because in the 2017 regular season, the Eagles quarterback was the best player in the NFL. No doubt about it. Maybe he didn’t get the award but Carson Wentz MVP.

Wentz brought them to where they were, with the best record in the NFC, but most people don’t seem to even want to give him even a little credit for it. The Philadelphia Eagles were 11-2 with Wentz under center in the 2017 championship season. Nick Foles is not better than Carson Wentz, if you think he is, you’re just wrong.

The ACL tear came to Carson Wentz’s knee in early December 2017. He Played another set of downs before throwing a touchdown on 4th down. Nobody should ever find a reason to question Carson Wentz in terms of toughness.

I’ve seen it written in sports articles that an ACL reconstruction has a 6-9 months of recovery time. This is the timetable for a normal person in terms of functioning properly. The 6-9 month window isn’t for a professional athlete to come back and play at an elite level. It’s more along the lines of a person just walking again without support.

Adian Peterson came back and ran for 2,000 yards in less than a year after suffering a torn ACL. One man, one year, out of all the torn ACL’s that occur in the NFL each season, each decade. The rest all say the same thing, you can come back after a year but you’re not right until after two years.

Carson Wentz returned 9-10 months after his surgery. I didn’t think he should have been out there playing in 2018. If you look at his stats for 2018 they are good and on par with 2017 and 2019, but at times he didn’t look right. How could he? If he was playing any other position there would be no chance of him being on the field when he was to start the season.

Should of been shutdown

Coming back to play before he should have and not being healthy, this led to more minor injuries. This is what people look at when they say Carson Wentz can’t stay healthy.

Wentz should have been shutdown for 2018 because if something major had happened on the injury front then his career would have ended or been seriously derailed in terms of athleticism.

For a player who in three more weeks would have been NFL MVP in the teams first Super bowl season and then seeing how Nick Foles got ALL the credit in Philadelphia, Carson is and was a class act.

A young player like that could have done several damaging things to himself. From excess partying, leading to legal issues or coming out negatively against the team or even requesting a trade. He remained steadfast and still does to this day.

Carson Wentz can make throws on point that not many QBs in the NFL can make. He doesn’t throw interceptions and The MVP award only eluded him because of injury.

Carson Wentz career stats and accomplishments are downplayed by too many people in Philadelphia. He holds The Eagles single season passing yards record as well as having the second lowest INT ratio in league history [min 1500 att].

Currently he’s on a 19 game TD passing streak, that is longest in the NFL. Lookup Carson Wentz’s season and career stats, he has many more analytical records. A lot of them he holds with some of the best to play the position.

Considering that Wentz didn’t leave the game after he tore his ACL until after he threw a TD pass four plays later, I feel if he was able to come back from his concussion against Seattle, he would have.

Carson is still young, a player just entering his prime. If he has another MVP caliber season or leads Philly to a title, on the road to victory, the same ones putting him down now, will be some of the same ones swearing they always loved him.

How about just turning it down a couple notches just so you don’t make other cities or players say “See that’s those Philly fans again.” Have some respect, he was a very integral part of the Super bowl Championship team. He was the MVP of the damn Eagles Super Bowl team.