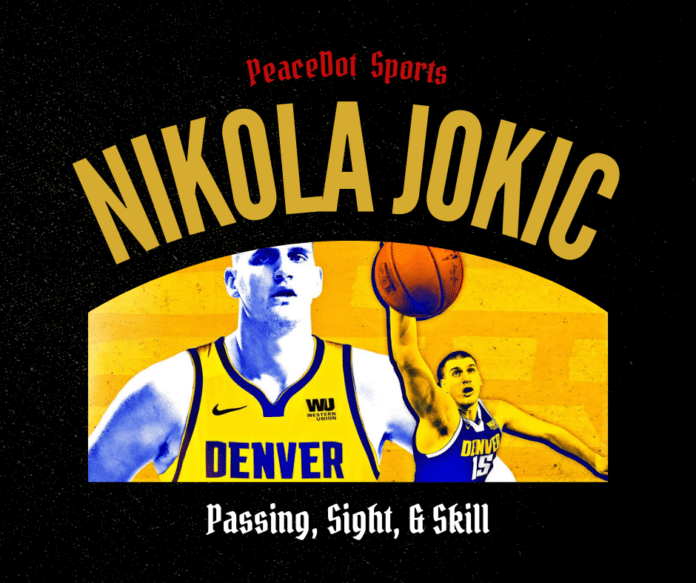 Nikola Jokic stats are what they are because of his unique skillset. Nikola Jokic passing, sight, and skill. He is a passing big man unseen in the NBA before. The cornerstone, the franchise player of the Denver Nuggets are quickly becoming western conference contenders. It wasn’t supposed to be this way though.

Watching Nikola Jokic last season in the playoffs, I began pondering how this player could be passed on 40 times before being selected by the Denver Nuggets in the 2014 NBA Draft. The 41st overall selection. 11th pick of the 2nd round. Nikola Jokic Denver Nuggets Jordan Brand 2020/21 Swingman Jersey - Statement Edition - Blue
$109.99
Buy Now
We earn a commission if you make a purchase, at no additional cost to you.

Nikola Jokic is from Sombor, Serbia. “The Joker” is the youngest of three brothers. His older brothers are a decade older than Nikola. Both were basketball players, one player college ball at Detroit Mercy.

Looking up to his older siblings, Jokic started playing basketball at a young age. In 2012, he signed with Mega Vizura of the Adriatic League and the Serbian League.

I wondered what had happened. Had Jokic just simply slipped through the cracks because he was a European player? Jokic who is Serbian was a standout center in his homeland as a teenager.

The very curious story of Nikola Jokic isn’t one where he grew 9 inches one summer, a la Dennis Rodman or Anthony Davis. Is it location? Serbians in the NBA

Former NBA All-Stars drafted in the 1st Round of the NBA Draft include Vlade Divac and Peja Stojakovich. In 2003 Serbian super prospect Darko Milicic was drafted 2nd behind LeBron James and ahead of Carmelo Anthony, Dwayne Wade, and Chris Bosh.

I finally set out yesterday to find out the exact reason for Jokic not being taken seriously back in preparation for the 2014 NBA Draft. Nikola Jokic 2014 had the same skillset that the future MVP candidate today has.

When I started searching for answers I was having trouble finding them. Some thought he was overweight, but is this really reason to not draft a jump shooting 7’0 footer. Nikola Jokic stats show double-doubles and his unseen passing abilities allow him to rack up triple-doubles on any given night in the NBA. Then I found footage of the 2014 Nike Hoops Summit. This Nike game is an annual high school all-star game pitting Team USA vs. Team World. Played at the Rose Garden in Portland. Its alumni since the first contest in 1995 includes most of the NBA’s biggest stars. It’s an elite game especially for overseas talent.

Watching the video above from the 2014 pre-draft process, “The Joker” was showing off his shooting and passing with the elusiveness we’ve all grown accustomed to from the Nuggets superstar centerpiece.

The scrimmage isn’t against bums either. Did you notice his skill and dominance in this video was mostly against top NBA prospect Karl Anthony-Towns?

It seems the scouts evaluating the players paid no attention to Nikola Jokic. Nothing else makes much sense. Given that this has been the only reasoning I can consider plausible, other than just being incompetent at their jobs. I read some early comparisons on Nikola and George McGinnis was one I didn’t understand at all. McGinnis was an athletic jumper who ran the floor with one handed wind-up dunks and finger rolls. I find this comparison just ridiculous. Another comparison was Dirk Nowitzki. I assume its because they’re both foreign, white, 7’0 with a deadly jump shot.

If I would have said a 25-year-old was the best to ever do something, I can’t imagine previously I would have. I’m not talking potential, I’m talking about right now.

Nikola Jokic is the best passing center to ever play in the NBA. Jokic and his approach to the game from a passing standpoint differs just in the mentality he takes distributing the ball. This is the biggest difference that leads me to say that I unquestionably think he is the best passing big man ever, and Nikola Jokic’s stats support this take. The Vision: Sight and Skill

Wes Unseld had a superior outlet pass, Nikola Jokic has that pass too. No look, over his head, behind the back in the paint. Passes, passes, passes. Tip passes, out-of-bounds outlet passes, half court in-bound wrap-around passes.


Bill Walton and Wilt Chamberlain could pick you apart on the blocks. Chris Webber was exceptional from the elbow. Shaq and Olajuwon could make you pay for doubling down.

Nikola Jokic does everything passing the ball with a Pete Maravich type-of-flair. No look, in the paint, behind-the-back, with inches-of-room to spare passes, dimes on the money.


At a glance some fans will see some of these passes and say “that was amazing but it’s half luck”. Maybe you’ll change your mind when you see him behind-the-back or over-his-head with perfect precision over and again.

After seeing some of these a few times, they will continue looking as lucky as the first time you witnessed them. After seeing the same “lucky” pass 10 times, then you realize luck has nothing to do with it.ÃƒÆ’Ã¢â‚¬Å¡Ãƒâ€šÃ‚Â


All this talk of passing could lead an average fan to not realize the 2x NBA all-star also averages over 20-10. Teamed up with young guard in Jamal Murray, the Nuggets have a nice young tandem moving forward.


You could see the talent back in 2014. Most teams in the NBA completely ignored Nikola Jokic’s stats and rare skillset. Denver saw it, whether a orchestrated plan or just dumb luck, the Nuggets drafted the Serbian and have a very unique superstar who will be entering his prime shortly. The future looks bright for him and the fans in Denver rooting for their Denver Nuggets.

I talk earlier in this piece whether the Nuggets just lucked up with Nikola or did they know what they were doing. I wrote the original article 19 months ago, everything up to the “MVP” heading.

It turns out that Jokic was originally entered into the 2014 NBA Draft but was going to pull out to play with another team in Europe.ÃƒÆ’Ã¢â‚¬Å¡Ãƒâ€šÃ‚Â

The Denver Nuggets promised his agent that if he stayed in the draft that they would draft him with the 41st overall pick, which they did.

Offense runs through him

Here’s Nikola Jokic stats that are evident to people watching Denver but it’s still crazy to see it. The NBA regular season most valuable player in 2021 had 7,269 touches for the Nuggets.ÃƒÆ’Ã¢â‚¬Å¡Ãƒâ€šÃ‚Â

Everyone knows that the offense runs through him but the next closest NBA player in 2021 is Russell Westbrook for the Wizards, touching it 6,192 times. Over a thousand times less than Jokic did for the Mile High City.

The 2021 most valuable player race came down to “The Joker and Sixers superstar center Joel Embiid. Nikola averaged 26.4 points, 10.8 rebounds, 8.3 assist, 1.2 steals, 0.7 blocks to seal the hardware for the Denver star. The assists make it difficult for Nuggets opponents to double team him.

It’s the super Serbian center that is averaging the most assist-per-game by a center for a career with 200+ games played at 5.9 APG. An average that should increase in the next few seasons.

The only reason it isn’t even higher now is because it was 2.4 his rookie season. His average after his first two seasons is 7.2 assist-per-game.

In April 2021, “Joker” notched his 81st game with at least 10 assists. He passed Wilt Chamberlain for the top spot for centers in NBA History.

He’s also one of three NBA players all-time to have a season of 25 points-per-game, 10 rebounds and 8 assists. The other two are Oscar Robertson and Russell Westbrook. Both of whom averaged a triple-double for an entire season.

The Serbian center registered his 50th triple-double in March 2021. Joining Wilt Chamberlain as the only centers to ever accomplish this feat. It took “Stilt” 703 games and Jokic just 416 to reach the same accomplishment.