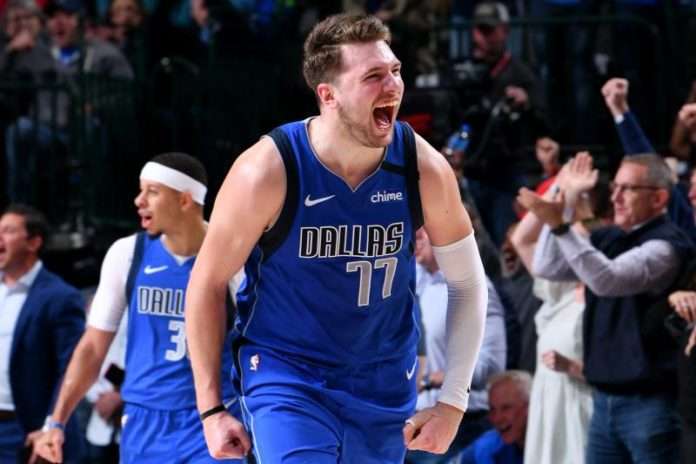 Luka Doncic, his skillset and the 2018 NBA Draft. The scouts that evaluated Luka Doncic and wrote his draft profile had him ranked as the best player available, that is until they changed their minds.

Why did they do this? Buy Now
We earn a commission if you make a purchase, at no additional cost to you.
Proof of Authenticity Included
Luka Doncic & Dirk Nowitzki Dallas Mavericks Fanatics Authentic Autographed White Panel Basketball
$1,199.99

By the time March Madness rolled around in 2018, it was becoming common thought that the first pick in the 2018 NBA Draft was going to be Arizona freshman center, Deandre Ayton.

I hadn’t seen much of him, living just outside of Philadelphia. What I did see early in the season showed me he deserved a spot towards the top of the draft.

Most freshman are much better later in the season as they get a grasp on the college game. Kevin Durant didn’t live up to the hype until conference play began in January. I figured I’d see the #4 seeded Arizona Wildcats play their best in March led by Ayton.

I was eager to see this 7’0 undisputed #1 pick in action. He should win at least a game or two on his own right? If he’s that good he would.

Larry Bird beat DePaul in the 1979 Final Four by himself. Short story long, Arizona loses to a 13 seed in the 1st round. He couldn’t beat Buffalo, who couldn’t beat Kentucky. Kentucky couldn’t beat Kansas State, who then lost to Loyola-Chicago.

One night I was relaxing, watching the NBA playoffs with friends, It was a 2nd round game between Boston and Philly. A conversation got started about the upcoming NBA draft. Maybe a promo had just aired or something.

I’d never seen Luka Doncic play. Why was he slipping? The experts said the year prior Luka Doncic’s draft profile evaluated him as the top pick in the 2018 NBA Draft.

I knew nothing about him other than his name and that he was considered a rare talent. It seemed NBA scouts were down on him as the Draft was approaching. Why had this happened?

The Arizona center was now first on almost every mock draft but I was unimpressed by what little I had seen from Deondre Ayton.

I wanted to find out why this guard from Europe was no longer considered the #1 pick. My first thoughts were maybe this 18-year-old was getting pushed around in a tough and gritty league.

Maybe Luka Doncic was being plagued by his age, a kid mixing it up with grown men. Was their strength and toughness to much for the teenager? The Euro League is a throwback NBA kind-of-league. Extremely hard-nosed.

It’s a league that’s not as talented as the NBA by a longshot. It is better than the NCAA though, not on the overall potential of players but in the right now of it all. No college team is beating the FIBA EuroLeague’s best teams.

Luka and his Skillset

As I began to investigate the situation, I was expecting to find something negative written in Luka Doncic’s draft profile. Had he regressed in his final season in the EuroLeague?

Instead I found that Luka led Madrid to the 2018 EuroLeague title.

In doing so, Doncic was named the youngest EuroLeague MVP & the Final Four MVP. An NCAA MOP or Finals MVP type-of-award. There are a host of other awards he garnered since turning pro at age 16 too. Many honors, like a whole page worth of honors.

The Video and Scouting

Immediately I went to YouTube to witness his game. It took less than 5 minutes. My friend asked “is he good”?

I responded “he’s Steve Nash at his MVP best, with more size, strength, speed, and athleticism”. “He can rebound and this is what Luka Doncic is now at the age of 18”.

My analysis wasn’t based on his potential upside but rather what I saw in the moment. I wouldn’t expect all scouts to be as fast to diagnose his talent. With time though, most should have seen it. Luka Doncic’s evaluation and pre-draft profile should have said that he must be the first pick overall under any and all circumstances

After watching the tape on Luka, I told anyone who would listen, if Luka with his skillset, isn’t the 1st pick in the NBA Draft, scouts and G.M’s will be fired. THIS IS SO EASY. I get the 7’0 thing. It doesn’t apply every F’in time though. This is the Luka Doncic draft, no matter who gets chosen first.

Phoenix is on the Clock

As of this morning, I still hadn’t really seen Ayton play to evaluate him properly. I only knew he was the wrong pick. The Suns should be getting better in the next couple of years with Ayton, but not on Deandre alone. He seems like a really solid player.

So this morning, I evaluated Mr. Ayton. Ten minutes go by, I’m just looking for a comparison. I saw some comparisons to a couple different players but nothing with enough confidence to put my name on it.

I got it! It took 15 minutes but now I feel confident, Deondre Ayton is BRAD DAUGHERTY.

DeAndre Ayton has a Brad Daugherty type-of-game. He’s athletic, but not 7’0 jumping over backboards athletic. He can shoot some. At Best case scenario, he’s Brad Daugherty. That’s his ceiling.

How could they not see Ayton isn’t a Shaq or Kareem. An Olajuwon or a Wilt. He doesn’t have the physical talent of a Dwight Howard. WTF, NBA scouts, some of you are being influenced and not forming your own opinion.

These evaluations are piss poor and if I was a GM I wouldn’t want these people working for me. Whatever they are watching and evaluating is the opposite of what people successful at the job would say.

Sac-town is on the clock

Sacramento Kings management I am a realist and I realize no one who works for you will read this. If in the off chance, luck is on your side and someone does read it, I am available to be a scout. If you read my stuff you’ll see I have a grasp on the salary cap and I’m also available to accept the post of G.M. and fix this mess of tragic events that has spiraled out of control.

I feel really bad for what happened to you. Marvin Bagley, WTF. I’ve seen him dunk over two defenders in the post. None of those players will ever be playing on the blocks in the NBA. I’m a Carolina fan, so I’m well versed in Bagley. SacTown shit the Bagley. I know, I know, it’s corny, but it’s still funny in a stupid sort of way.

If you want someone who has absolutely no professional experience at this, get in touch with me before the NBA moves your franchise back to Nebraska. My resume reads inexperienced but not retar…oops challenged in the brain like your current scouts and senior personnel.

ATL is now on the clock

The hawks. OMG, you’re So LUCKY,, a generational talent fell to #3 due to the incompetence of other franchises. Congratulations Atlanta. This is a Wonka Golden Ticket. OH WOW! Unbelievable, Just Wow.

It’s nice to see someone was smart enough in the NBA to make a simple evaluation on a special talent. Luka’s skillset must have shown Mavericks scouts what I saw Pre-NBA Draft.

If Lebron James never existed, Luka would be doing things that no one his age had ever done before. Given that LeBron does exist there are still some things he’s doing that James couldn’t even accomplish.

His scoring and complete offensive game is well advanced for his age. Luka Doncic is averaging more points & assists, than anyone, 21-under in the NBA – Ever…. AND ITS NOT EVEN CLOSE.

An argument can be made that Doncic is a better shooter today than LeBron ever was. Whatever you think, it’s close. Luka and his skillset despite the scouts are setting the NBA ablaze right now.

Last night, Doncic had a 35 point triple-double in 25 minutes. This came off of one MVP caliber performance after another. Each game is a highlight reel of stats. The last & latest on Luka report.

It is totally viable that Luka could become the youngest NBA MVP in league history. I never thought, let alone predicted anything like this. I did see more than enough that nobody else should even have been considered for the first pick in the 2018 draft.

Some guys are known for their initials or a nickname. No matter what the name is, everyone knows who is being talked about. Some just go by their first name like Mike. Wilt. Kobe. Oscar. LeBron. Shaq. Magic. Kareem. Dirk. Vince. Allen. Giannis. Moses. Julius. Kawhi, and now Luka.