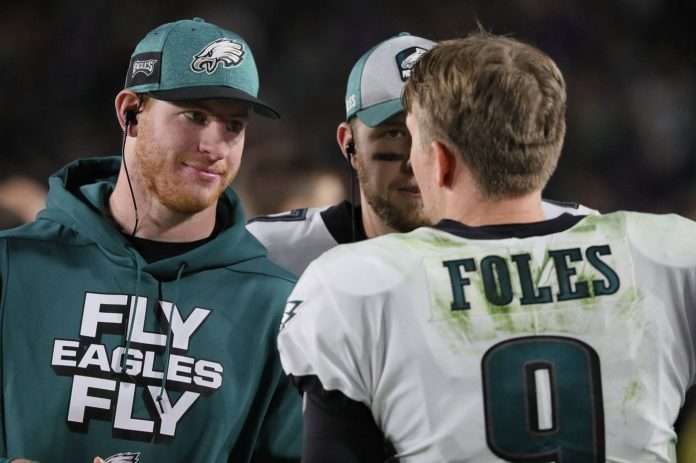 Carson Wentz, the new contract and the Eagles expectations. Should more be expected by Eagles fans since Wentz is being paid more money? Does it even matter what the talent level is in Philadelphia?

This Sunday Philadelphia plays host to the defending Super Bowl champions, New England Patriots. This matchup of the last two Super Bowl winners features the teetering on .500 Eagles looking to find an identity that will lead Philadelphia and its fans back into the postseason for a third consecutive season.

Carson Wentz has gotten a contract extension will be under center for the Birds opposite Mr. all-everything, Tom Brady. Max Kellerman and the like blame Wentz for the Eagles mishaps and overall performance this season. Is it warranted, is it based in truth?

What happened to the Eagles?

Preseason hype was high for the Eagles coming into the 2019 season, just one season removed from a Super bowl title. I personally didn’t see it. I thought the team had some talented players but I thought they were being severely overrated. A possible playoff team, but not a realistic Super bowl contender.

Phillies all over again

Many saw the Phillies past season as a failure. Mainly this sentiment is felt because the Philadelphia media said it was so. The Phillies added some good hitting but had no pitching.

In April I knew the Phillies weren’t going anywhere. After Aaron Nola they had inconsistent starters and relievers who couldn’t be counted on. Long story short, it’s got to be someone’s fault. I don’t know if Gabe Kapler was a good manager or not. I only know no manager would’ve been able to do anything with that staff or bullpen.

It seems locally and nationally that whispers are growing louder that it’s Carson Wentz’s fault (Max Kellerman) for Philly being a lucky 5-4. I say lucky because of Green Bay losing some key players and how the ending of the game unfolded.

Add in a couple of easy wins and the Eagles sit at 5-4. Carson Wentz may not be having the finest season at quarterback, but to blame Wentz for the Birds mishaps is ridiculous.

The Philadelphia Eagles aren’t a real contender and instead a tier down from that. A major reason is the pass defense. You can’t give up 35-40 points a game to the contenders and realistically expect to win.

Teams are going to score about 35-40 points, about 80% of the time playing against the Eagles this season. You’re not going to score 40 points every game and it can be broken down that simply!

I was a big proponent in the Eagles acquiring Jalen Ramsey. The Birds should have offered the Jacksonville Jaguars three 1st round picks, in five years they wouldn’t have the impact Jalen Ramsey would havehad.

Even if the pass defense was decent, a player with that skill, at that age, and at that position is never available. There isn’t more than 2-3 shutdown corners in the NFL at one time. If that many.

The Eagles missed out big time. Yes, I know the importance of draft picks. Do you know the value of a 6’2, 24-year-old, Olympic quality leaper (literally), who shuts down receivers on an island that other teams can’t stop with bracket coverage?

When playing quarterback it’s a completely different mindset knowing if you don’t score and have to punt, that your opponent is probably going to score again before you get the ball back.

With that being said, Carson Wentz only has 4 interceptions to accompany his 15 TDs so far this season. For a young player, he isn’t forcing turnovers while still putting up good numbers. This is why Howie Roseman and the Eagles franchise gave Carson Wentz a contract extension.

If he keeps pace Wentz is looking at about 30 TDs and 4,000 yards passing. Those stats he is throwing out for the Birds aren’t those of a player you blame your lack of talent and losing on.

For those who wish Wentz was gone and Nick Foles was still in Philly, thankfully someone else gets paid to make that decision. The only problem I have with Wentz is the reckless disregard for his body ÃƒÆ’Ã†â€™Ãƒâ€šÃ‚Â  la Bobby Orr or Eric Lindros. If that continues it will be a short career.

The Media…. In conclusion

In closing, I feel the real problem stems from the Philadelphia sports media telling the fans a team, be it the Eagles or Phillies, are more talented than they are. The casual fan takes this as gospel because these people are on T.V or the radio.

Then when they are wrong they call for someone’s head. By the way, the Sixers won’t go farther this year and there wouldn’t have been a game 7 without Jimmy Butler last season. I hear the media saying the Sixers are better than last season. This is laughable. Let me know your opinion. I saw this coming with the Birds. Anyone else know how to evaluate talent?