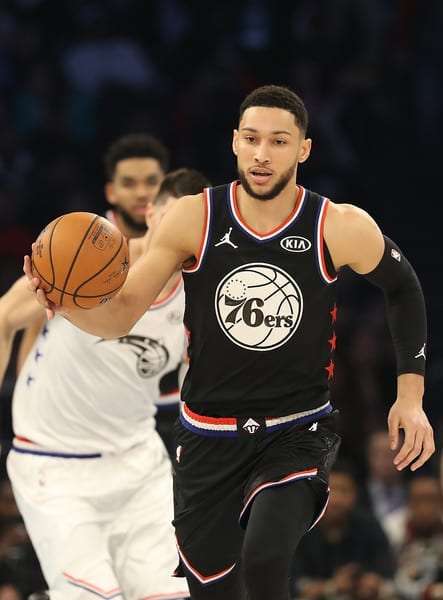 What Ben Simmons is shooting for? An All-Star point guard shooting the ball shouldn’t be a question. If it is, it should be one about accuracy, not that he just doesn’t attempt them.

After the season he spent at LSU, I didn’t think that the Sixers should have drafted him. I recognized that he was playing as a Power Forward in college and it was said that he really was a point guard. So when the 76ers played that summer, I tuned in.

Like most summer league games I was viewing a slow, sluggish matchup, where about 75% of the participants would never compete in an NBA game. Then Ben checked in and everything changed.

I’m not sure if he had a point, a rebound, or any assists. What I do know is everything changed, from the pace of the game, to how the other players looked on the floor around him. I understood this wasn’t a regular season game.

He made all his teammates look like they had just gotten an upgrade. I laughed and said “Oh now I get it”. I understood why he was always going to be the #1 pick. He was Magic Johnson.

For the next year, Simmons was recovering from foot surgery and didn’t play. I’d tell people “Ben Simmons is Magic Johnson” Anyone who knew the game, they thought I didn’t. I told them “just wait, you’ll see”.

Last year, I was watching games with some of these same people. The analysts covering Sixers games on T.V started comparing Ben to Magic. I was pretty arrogant at this point. These were the same people that accused me of not knowing anything about basketball. It was blasphemous for me to make the comparison of Ben to Magic.

I understood, I’d have felt the same way if I didn’t know what I knew or hadn’t seen what I had seen. When I was younger for enjoyment I’d watch all the old NBA games on NBATV. I’ve seen them all. All the great players.

When I saw Ben Simmons and compared him to Magic, it hit me like a ton of bricks. I knew exactly what I was saying.

Ben didn’t even lead LSU into the NCAA tournament. I was personally wondering if this kid was being overhyped before baring witness to this glimpse of summer brilliance.

Why didn’t Ben Simmons practice shooting as a kid?

Ben’s family knew well in advance that when he became draft eligible, he’d be drafted with the NBA’s first overall pick. I’m pretty sure they knew back when he was 15 or 16-years-old.

If his father was a professional baller, and his older brother has been a collegiate player, coach, and now Ben’s trainer, how come no one told him he needed to add a jump shot to his arsenal?

Why is Ben Simmons shooting in the NBA just theoretical?

Simmons was interviewed on NBATV this past offseason as part of the 76ers 2018-19 eastern conference preview show. In this interview he claimed that he never once in his life practiced his jump shot. NOT EVEN ONCE HE SAID.

Not shooting around with buddies or at a team practice? WTF. He makes NBA players look like kids with his size and strength when he puts the ball on the floor.

I’m sure he went wherever he wanted on the court when he was in high school and it wasn’t necessary for him to shoot jumpers. Now a first time All-Star, Ben Simmons’ shooting with the Sixers in the NBA needs to develop from ground zero against the best competition in the world.

Ben’s best skill on the hardwood is his vision. It’s a skill that really can’t be taught. Whether Magic Johnson or Wayne Gretzky, it’s rare to have vision like this. No matter the sport, this talent is rare and at a premium because you have it or you don’t, most don’t.

Given that his best asset is court vision, it’s fair to say when Simmons came to the NBA, he was always planning on playing at point guard. With his vision, athleticism, agility, at his size, to maximize his talent of course he’d be an on-ball guard.

I’ve since changed my comparison of Simmons to Magic slightly. I wasn’t wrong, I just didn’t realize Ben’s athleticism at his size. Not at first.

In person and on the internet people talk about trading him. The only comparison I make now is to LeBron James. This comparison can’t truly be realized until Ben Simmons starts shooting the ball.

What in the NBA would you trade a 22-year-old LeBron James for? Ben Simmons is a guard, who was drafted first overall, won the NBA Rookie-of-the-Year award, and now is a first time all-star and he can’t shoot the ball at all. That sentence and the reality of it, are both amazing and embarrassing.

Philly and its Future with Ben Simmons

Sixers simply can’t trade Ben Simmons. If You Weigh the pros and cons, you can’t trade him. Here’s what can happen, what If he doesn’t care and never learns to shoot? Then Ben plays in a handful of NBA all-star games. If he does care and develops a mid-range game, then he’s LeBron James. If you’re reading this and disagree you’re absolutely wrong.

Right now, a player like Kawhi Leonard doesn’t have to play Ben Simmons for a jump shot. So he cheats. The long, athletic defenders know he isn’t shooting the ball. Lesser defenders, Simmons can still blow by them, even when they know he’s going to do it.

If the better defenders thought he might pull up for a shot, it allows Simmons to blow by them too. It also would change the entire structure of the Sixers offense. The essence and the emphasis on how the offense functions would change.

It would allow his talented teammates like Joel Embiid to be so much more effective. Just a 15 footer would change everything about The Sixers offense. It would change Ben’s game, the running of the offense, and every single teammate would be greatly affected for the better.

Rings for the city?

The Philadelphia 76ers would be true contenders and most likely they would be champions. Without a jump shot, guys like Kawhi and Giannis can cheat on defense. They know, if he attempts to score, it’ll only be one way.

Defenders this good, won’t allow him to get to the rim, if his game remains one-dimensional. Add a shooting dimension and then he becomes a match-up nightmare. With his vision, he’d be a triple-threat offensively.

Now everyone else stays on their man and the offense bogs down. Ben has to give up the ball. It’s a liability and a disadvantage for everyone playing with him. The good news for Ben Simmons is shooting can be taught. What Ben possesses physically can’t be.

If Ben Simmons didn’t care to practice shooting, what about his father and brother? Didn’t they try to convince him to work on at least a 15-footer to keep defenses honest?

The Numbers So Far

In an NBA, where many of the game’s big men are hitting three pointers with regularity, there is a guard who has no jump shot whatsoever.

Given the fact that Ben Simmons can’t shoot at all, in his first 2 NBA seasons, he’s won the NBA Rookie-of-the-Year award and became a first time all-star in his second season. Both seasons helping lead the 76ers to the playoffs, where they previously hadn’t been since 2012.

This is absolutely astonishing, given the fact every player in the league knows he isn’t going to pull up and shoot the ball.

Usually when you talk about a player and say he can’t shoot, it’s not meant literally. It means he’s not a very good shooter. With Ben though, as of now it’s literal. He won’t shoot. He doesn’t shoot. This season Ben’s stats from:

What Future will be Chosen?

So the plan now is for Ben Simmons to work on his shooting in the NBA with his new shooting coach, who is his brother. Why didn’t this happen when he was a teenager?

In college, his brother, his trainer, the man expected to show Ben Simmons the art of shooting in the game of basketball, shot 28% from three and 63% on free throws from the line during his college career.

Maybe Ben Simmons should go see what Dirk Nowitzki’s trainer Holger Geschwindner is up to.

If Ben wants to have at least an honest 15-footer, and he puts in the work, it will happen. Considering he hasn’t bothered at all up to now, the real question is does he even care?

The ball is in Ben’s court now. Will he take his shot at greatness or just pass it up?