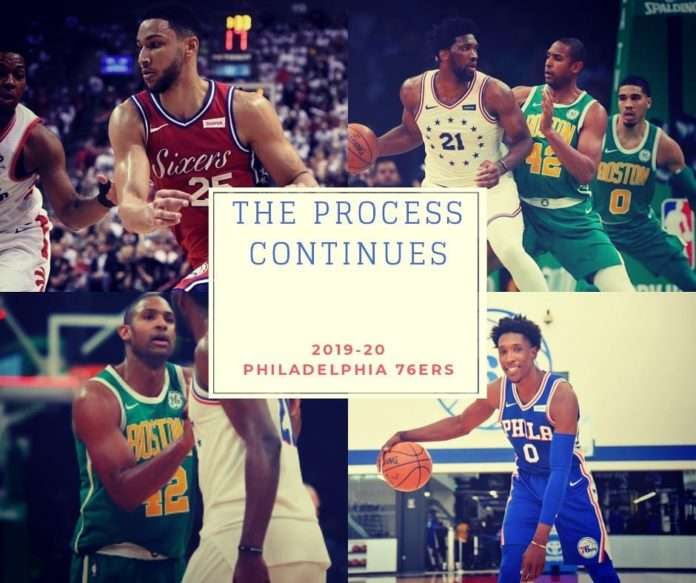 As the new NBA season is about to get underway, this article previews Al Horford and Josh Richardson, the Sixers new faces in 2020. I’ll cover the main additions and subtractions for the 76ers for 2019-20.

The addition of Al Horford and Josh Richardson to the Sixers and the loss of Jimmy Butler and J.J Reddick most of all.

Everyone who stops to read this knows Kawhi Leonard and the Raptors defeated the Philadelphia 76ers on a buzzer-beater in game 7 of the East Semi-finals on their way to winning an NBA title.

Many fans and experts think the 76ers are better this season compared to last season. They think the Sixers were one shot away from winning the championship. I’m not one of those people. Just because you defeat one opponent doesn’t mean you automatically defeat everyone they went on to defeat.

Toronto was down 2-0 to Milwaukee, and won game 3 in double OT. If that game goes differently and Toronto loses, they go down 3-0 and the Raptors probably lose to The Bucks in 4 or 5 games.

Al Horford is a good player. He was an all-star caliber player in the past. That is of course depending on the players at his position, in his conference in a given year. He is not an elite player. Does he make the 76ers better this upcoming season? Yes he probably does.

Horford usually make the smart play with the ball in his hands. Al can also bring the ball up the court if need be. He adds better post offense and overall defense at the Power Forward position. He is not a better rebounder than Tobias Harris at the 4 or a better shooter, contrary to what some seem to think.

The other forward position, which will be taken by the aforementioned Harris is downgraded in every possible facet of play compared to Jimmy Butler.

What I think of Horford

People seem to use the trouble Horford gave Joel Embiid as the reason the Sixers are better with him on the team. Aaron McKie was a very good defender when he played in the league. No one is putting him on a list of the best defenders of all-time.

Kobe Bryant has stated on many occasions that Aaron McKie gave him more trouble than any other player who guarded him. McKie wasn’t the best defender Kobe ever faced but Bryant had trouble against him. IT JUST BE LIKE THAT SOMETIMES!

I see Horford on Embiid as a similar comparison. Horford is a good defender but maybe not as good as some think he is in Philadelphia. He was named to one all-defensive team. That was a couple years ago, it was a 2nd-team selection.

The Hawks when losing Horford, lost five more games than Horford’s last season with Atlanta. In the end they did no worse than the previous season.

In a comparative contrast after joining Boston, Tito helped them win five more games than the season before he came to the Celtics.

Boston never went any farther with him than they had before acquiring him. It’s my opinion he’s not a player who takes you over the top. Maybe I’m wrong. I hope I am, but I’m not.

Importance of Josh Richardson for Sixers

Josh Richardson, who was a part of the Jimmy Butler trade. Coming to Philadelphia from Miami, Richardson has improved every season since his freshman year in Knoxville.

The Heat drafted Richardson with the 40th overall selection in the 2015 NBA Draft. After being named 1st-team SEC as a Senior and All-defensive SEC his Junior and Senior Seasons. In his 4th NBA season Josh averaged a career high 16.6 ppg on 41.2% from the field.

If Josh Richardson can get his field goal percentage up and increase his scoring output as he has in every season so far, he could become an all-star caliber player.

No one really knows what Josh Richardson’s ceiling is, which is great for Sixers fans. What we know are Philly’s two best shooters in Reddick and Butler are gone. After his defense, jump shooting is going to be crucial in the importance of Josh Richardson as it applies to the 76ers and Philly’s future success.

The Sixers defense should be improved. We know that is what wins championships. You got to be able to score the ball though. You are going to have to hit jumpers in the postseason. Hopefully Ben Simmons comes with an improved shooting game that includes him actually shooting the ball.

Ben won’t go from no shot to a good shot in one year. Hopefully when playoff time comes around and guys like Giannis play Simmons to drive, this time he makes them pay.

If the best defenders know you won’t shoot, they aren’t going to let you put the ball on the floor. This year they’ll give him the shot, hopefully Ben makes them pay for it. Combine that with the best in the East losing talent or not improving and Philly has a chance to go farther and be better seeded this year.

It is my opinion, the combination of Ben Simmons developing a jump shot and the further maturation of Josh Richardson will be the difference in the end, if the Sixers are successful, moreso than Al Horford.