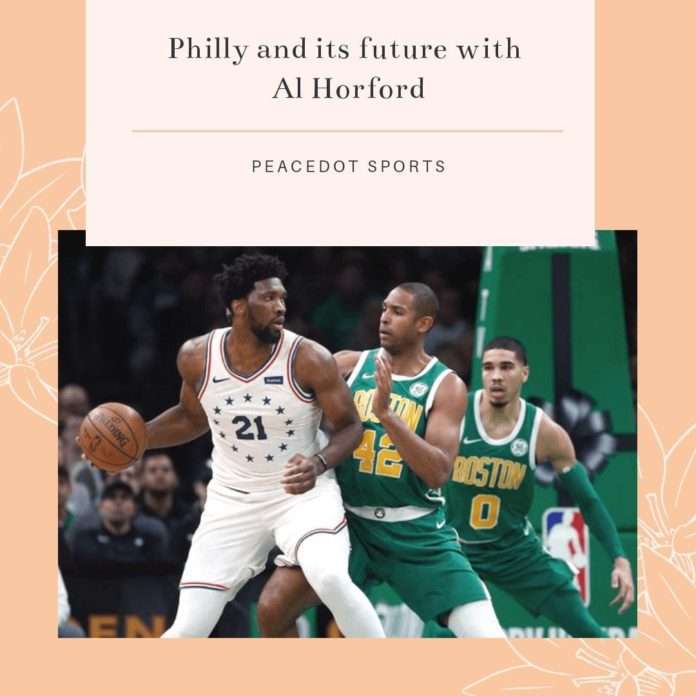 Breaking down the Philadelphia 76ers signing of free-agent veteran and the five time all-star, Al Horford to a four year contract, worth $109 million dollars this past summer. How does Al Horford’s contract affect the Sixers future. Was signing Al Horford signing a free-agent deal a good signing for the Sixers?

Al Horford: What to expect?

Al Horford’s numbers over the last five seasons have been very consistent. If that holds up this upcoming season, Horford is good for 13.5 points-per-game and 7.0 rebounds.

Al will also get you over 4 assists and about a block-per-game. Horford is an upgrade defensively compared to last year’s power forward Tobias Harris. Most noticeably on the blocks.

He signed a four year deal with the Philadelphia 76ers worth $97 million and Horford could make up to $109 million. $12 million of this contract is bonuses tied to if the Sixers win championships.

Some people believe the Sixers now have a power forward who can stretch the floor and hit three pointers. Just to clear this up, they had one last year in Harris. Tobias is a much better shooter than Horford and only averages about one less rebound-per-game.

The season prior to free agency the ex-Boston Celtics center averaged 13.6 points-per-game and 6.7 rebounds. He was the 3rd overall pick in the 2007 NBA Draft by the Atlanta Hawks. The Celtics signed him to a four year, $113 million back in the 2016 offseason.

The Sixers decided that signing him to a long term contract with almost all of his $109 million dollar deal guaranteed was the direction to go in. I think this was foolish and the future will prove I’m correct.

Horford is the defensive upgrade. Tobias will move to the other forward position after signing a new contract in the off-season. At 6’9, the former Celtics center/forward is also capable of bringing the ball up the court. He’s got a good handle for a big man and a patience with the ball that can’t be measured in stats.

The ending to last season was something of an anomaly. I don’t think Toronto would have won the championship if Kevin Durant and Klay Thompson hadn’t gotten injured.

These things happen and if you capitalize on them, the record books will reflect your accomplishments nonetheless.

In a couple decades, many people won’t even remember this. Young people who never saw it, will only say the Raptors defeated the vaunted Golden State Warriors in the 2019 NBA Finals.

Most Sixers fans remember game 2 in Toronto vividly. For those who don’t here’s a quick recap. The Sixers are up close to 20 points a few minutes into the 2nd Quarter. The Raptors made several comebacks but never took the lead because of Jimmy Butler’s heroics.

Toronto never once took the lead in the game. Each time they came close Butler singlehandedly answered his opponent. The rest of the Sixers looked shell shocked. Based on the rest of the team’s body language and demeanor they were shaken badly. They would have lost the game if not for Jimmy Butler.

When players react like this, it’s usually over. I firmly believe without Butler in game 2, there would never have been a game 7. That’s not me saying it would have ended in six. Maybe it would have, but being down 2-0 after a loss like that, it may have been game, set, match. Good chance the Raptors would have won in four or five games.

After losing Jimmy Butler, Philly also lost J.J Reddick. In trading Butler, the 76ers acquired a player in Josh Richardson, who is an upgrade on defense over Reddick and last season averaged 16.6 points-per-game. His ppg have gone up in each of his four NBA seasons. He only shot 41.2% from the field last season and is shooting just over 42% for his career. That won’t do for a shooting guard who lacks truly special talents.

Does Al Horford contract take Philly to next level?

Personally the Horford deal isn’t a move I would have made. It might make them better, but it doesn’t in my opinion take them to a championship level. The only thing that will take Philadelphia to the next level is Ben Simmons becoming a threat to shoot the ball. Horford and the 76ers is not a marriage that should have happened. I’d look for an annulment, PRONTO, from Horford and general manager Elton Brand.

The Horford effect in Boston

He is a player who’s athleticism is in decline. If you don’t agree with my evaluation, just go watch him from a few years ago. He can hit 3’s, but only when completely open. He takes a set shot that seems like I could get up and grab a beer and come back in time to see if he made it or not, in real time.

What it all means in the end

I am in the minority in that I don’t think Al’s contract was a good signing. The years and the money used for Al Horford’s deal was an unwise decision for the 76ers future.

I think General Manager Elton Brand lost Jimmy Butler and recklessly made a move, worried what the fans and media would think or say. Horford is already athletically in decline, this is ridiculous.

Philly is stuck with him. No one is going to pickup his contract unless it’s in the final year and for that to happen Philly would most likely have to give up a 1st round Pick.

No matter what happens these players are the Philadelphia 76ers core for the next four seasons.

Good or bad. If there is a high profile player that would help take the Sixers to the promised land ÃƒÆ’Ã†â€™Ãƒâ€šÃ‚Â  la Moses Malone, it won’t financially be possible. The Sixers won’t be able to acquire elite NBA players for some time.

The only thing now to take Philadelphia to a championship is a Ben Simmons jumper. That would change everything for every player on the floor.

Al Horford wasn’t a difference maker in his prime. He’s been a five time all-star and still could be a nice player. He could be a hall-of-famer, mostly for his collegiate career with the Florida Gators.

Philadelphia this upcoming season is better with him than without him. My objection is he is not elite. When that elite player is available the 76ers will not be able to sign or trade for him. A G.M needs to show patience and weigh moves for more than just the immediate future. Until Ben can shoot this team is only on the cusp. The Al Horford contract signing may come back to bite the 76ers. This is yours and my Philadelphia 76ers for the next four years.

After the 2020 bubble, the Sixers were swept in the first round of the eastern conference playoffs, Darryl Morey was hired as the new President of Basketball Operations.

Elton Brand is still the GM, but Morey is making all the decisions. The first big move was shipping Al Horford contract to the Oklahoma City Thunder with draft picks for the expiring contract of Danny Green.

The Al Horford trade was a great move for the Sixers. The only problem now is Tobias Harris is making double what he should be making. He is a nice player but not at franchise player money. He will be the highest paid Sixers player through 2024.