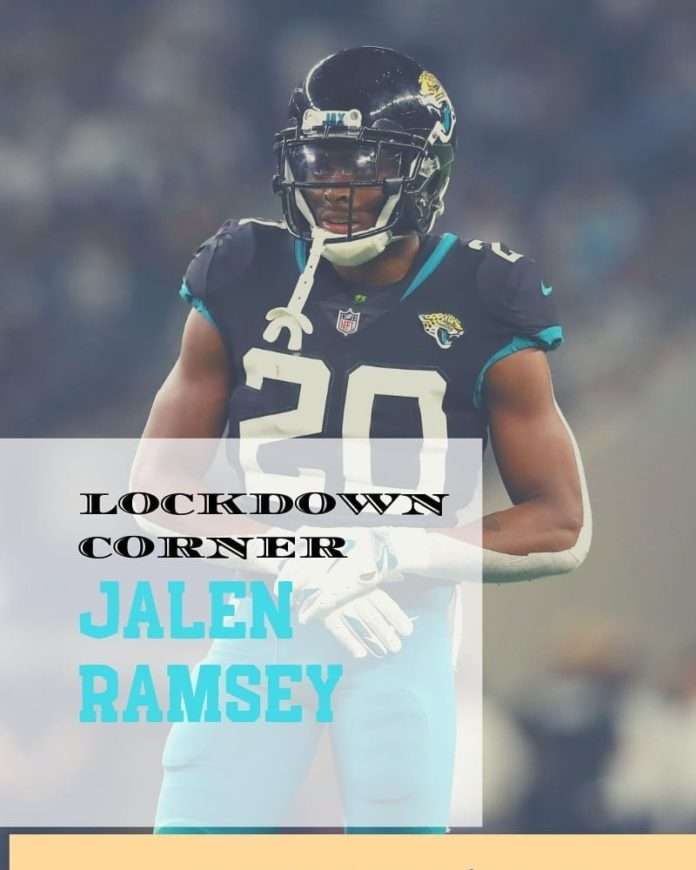 The Philadelphia Eagles need to get Jalen Ramsey via trade with the Jacksonville Jaguars . This isn’t an opportunity they can afford to miss out on as a franchise.

A Glance into Tallahassee


The Jaguar’s blanket cover man also had a stellar track career in high school and college. In 2015 the 5-star consensus All-American, who started every game at cornerback for the 2013 National Champion FSU Seminoles, also won the ACC long jump title. Three more inches and he would have automatically qualified for the 2016 U.S olympics team trials.

The only other player to start every game for Florida State as a true freshman at cornerback was Deion Sanders. I am not comparing the two at all. I’m just pointing out how rare it is for a true freshman to start from day 1. Like Sanders some people take pause at how voiceterous Ramsey is and give him a red flag or black mark for it. Deion did the same. Then he backed it all up.


When Primetime joined Michael Irvin and the Cowboys in 1995, Irvin got to see Deion’s game preparation habits. He said “Sanders made tapes and studied his opponents even throughout the flight to the game”. All this prep and he knew the ball was never going to be thrown to his side of the field. My point being usually the guys that talk a lot, put the work in to not be embarrassed.

Muhammad Ali was another example of this. If they were going to fail and look stupid for running their mouths and not backing it up, it wasn’t going to be because they weren’t prepared. Mentally and physically. I believe Ramsey is cut from this same cloth in his mental approach. ÃƒÆ’Ã¢â‚¬Å¡Ãƒâ€šÃ‚Â


A great shutdown cornerback is rarer than a franchise quarterback. Their is at least one franchise signal caller every other year. ÃƒÆ’Ã¢â‚¬Å¡Ãƒâ€šÃ‚Â I’m playing the minimum percentage here too. Some NFL drafts have three or four great quarterbacks. There aren’t usually that many but it’s not as unusual as the lockdown corner. This is why the Philadelphia Eagles need to trade for Jalen Ramsey.

Quick example: Eli, Big Ben, Rivers. Another Elway, Marino etc. There is not a shutdown corner available every other season. If there are three in the league at once that’s highly atypical.


For the record, don’t confuse 5x pro-bowler with shutdown corner. Many people call all-stars or even future hall-of-famers, lockdown or shutdown, when that’s not the case.

Deion Sanders being the shutdown that has no peers, had offenses not throwing to his side of the field for a good 7 or 8 years. Ramsey is 24-years-old, beginning his 4th season. In 2017 he was AP 1st-team all-pro and a major force in the Jacksonville Jaguars almost going to the Super Bowl. In 2018, he was a pro bowler for the 2nd straight season.


The Philadelphia Eagles top Cornerback was a college teammate of Jalen’s, Ronald Darby. Darby is a good corner who is listed at 5’11. I feel he’s smaller. Maybe I’m wrong. He is a good player. What he isn’t is a true #1 cornerback.

He would fit in better as the number 2 guy. With every top receiver 6’12, and 259 pounds of solid muscle, Darby is outmatched sometimes. I like the young guys the Eagles have sometimes. I like them more for the future though. Players like Jalen Mills and Avonte Maddox show potential but aren’t ready to make an impact now.


Against Washington, someone or multiple somebody’s playing the cornerback position, let receivers I’ve never heard of get 15 yards behind the Eagles defense. The pure definition of beating a corner downfield. Wide-open Redskins with an Eagles player not within arms length. This happened more than twice in the first half.


I personally feel the shutdown corner is the absolute golden ticket of the NFL. A HOF pass rusher is great, if you have it. You can still get to the QB if you don’t though.ÃƒÆ’Ã¢â‚¬Å¡Ãƒâ€šÃ‚Â

If you’re a bad team in need of a quarterback, scout well and in two to three years, you’ll get your franchise quarterback. The only thing that comes close in terms of rareness is a all-time great left tackle.ÃƒÆ’Ã¢â‚¬Å¡Ãƒâ€šÃ‚Â

Jalen Ramsey many scouts thought was going to be a free safety at the pro level. So even though he doesn’t need to and you don’t see him make tackles. He can tackle regardless of what Tre Mason would tell you.

In sports guys get injured. You can’t account for that. Ramsey has been relatively healthy since high school, other than a meniscus tear in his rookie season.


I would give up two #1’s. It is highly unlikely when all is said and done, that the Eagles next two 1st round picks, which shouldn’t be lower than the 25th pick, will ever equal anything close to Jalen Ramsey. The Eagles need to trade for Jalen Ramsey