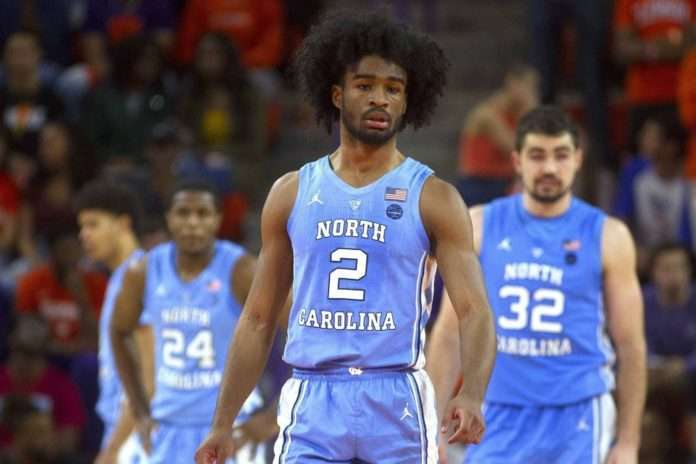 Coby White NBA star or role player? Will he be a shooting guard or a point guard? Where will Cobe White be drafted in the NBA Draft tonight.

Coby White, the 19-year-old freshman out of North Carolina is expected to go as high as 6th in tonight’s NBA draft. My question is if that’s the number he’s drafted at, will the teams drafting 3rd, 4th, and 5th wind up regretting passing on White? What will Coby White be in the NBA?

As White finished high school he was the leading scorer in North Carolina state history. He was a McDonald’s All-American and the 2018 North Carolina Mr. Basketball. This award is given annually to the best player in each state.

With these accolades he was a high recruit going into his freshman year at Chapel Hill. Was he ranked as high as he should have been? Coby broke the all-time scoring record in a state with an illustrious history in basketball talent. Ranked 26th overall and 6th at his position by rivals.com, it was probably a slight to Coby.

Coby White looks to stand at about 6’2. In actuality he is 6’5, 185 pounds. He just finished one of the best freshman seasons anyone at Chapel Hill has ever enjoyed. A point guard doing this is very impressive to say the least.

At 19-years-old, Coby White is already a clutch shooter with range heading into the draft. White is blessed with a quick first step and blazing speed. His jumper allows him to put the ball on the floor or create his own shot. These tools should help Coby White in the NBA. He could be a deadly offensive threat.

I’ve watched many players come through college on their way to the league. I don’t know how many teenage guards were this good at his age. Cobe’s speed moving the ball from baseline to baseline is statistically the best in Tar Heel history. In lamends terms, White’s speed is off the charts with the ball in his hands. Beep Beep!

Coby White can already shoot better than most teenagers who have entered the NBA. I’ve pointed out that his speed is off the charts and his strength will improve with age and strength training. Everyone’s does.

On the defensive end, White has some work to do. His defense is young like he is. He lacks experience and strength. White does however have lateral quickness to be a good defender. At times he looked lost in his one year at Chapel Hill. Through work and awareness along with confident anticipation to the first move of his opposition, Coby White could be a good defender in the NBA.

The future 1st rd. pick has good lateral quickness. If White wants to be a good defender, he will be. What will Coby White be in 5-7 years? I personally think the teams thinking of taking Barrett or Garland may look back with regret having passed on Coby White. He should go no lower than 5th tonight. I’d take him as the 3rd pick. Very shortly we will see what the people who get paid to make these decisions do. Hopefully they aren’t living with regret or looking for a new job. Don’t sleep on Coby White in the NBA Draft.