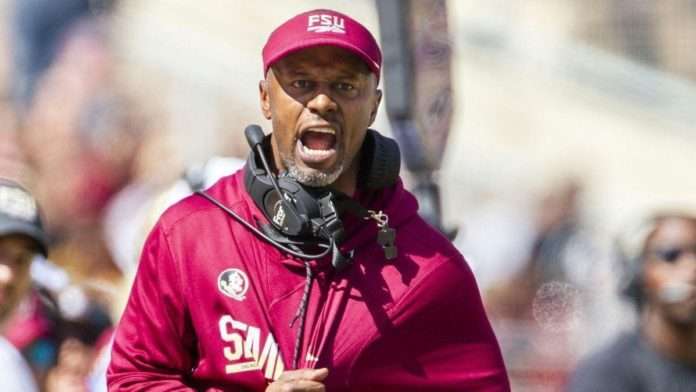 I’ve been reading articles on Willie Taggart and the Florida State Seminoles. Some writers weigh in heavily that his time in Tallahassee needs to be meeting an end. Other articles are focused on the diametrical view of Willie Taggart’s FSU job and its future. Tabbing the former as being shortsighted. I’m not here to choose sides, just to lay out some facts.

No matter which side anyone takes. No matter how extreme the argument they’re trying to make, each take seems to agree that when Willie Taggart came to Tallahassee from Oregon he was walking into a bad situation.

One article called it a raw deal. It doesn’t seem in most cases that this refers to replacing Jimbo as head coach as much as it’s in reference to the overall talent in which Willie Taggart was left with at FSU after Jimbo Fisher’s swift departure.

2019: the talent in Tallahassee

As Willie Taggart takes FSU to 1-1 following a nail biting 2OT victory over….. Who was it they just beat again? Here’s what Taggart inherited according to rivals.com.

The 2016 and 2017 classes were ranked 2nd and 5th respectively. The 2018 class that Fisher never completed ended up ranked 10th nationally.

The FSU Defense is all 4 and 5 star players!

After two weeks the Noles have given up 80 points and have the 124th ranked Defense in the country. Almost every player on this defense is a 4 or 5 star recruit and here’s where a few were ranked in their given year.

The rest of the defensive players are high 4-star recruits. Players brought in by the Fisher regime. Not every recruit hits for an assortment of reasons, but do you think, that Jimbo Fisher missed on an entire defense of blue chip recruits?

Three recruiting classes of defensive busts, top to bottom. The Seminoles have some of the top defensive recruits from 2016-18, yet they’ve surrendered 80 points in two games.

They have the 124th ranked Defense in the nation. Look at some of the other defensive players that Jimbo recruited while he was the Noles head coach.

In closing, in my opinion it can only be one of two things. Jimbo Fisher, the 2nd best active recruiter behind Nick Saban, either missed on every recruit over 3 seasons or the staff in place in Tallahassee now, doesn’t know how to coach up the talent. If anyone has a take on this I’d love for you to share your opinions.

Take the Gambling out of Sports Betting