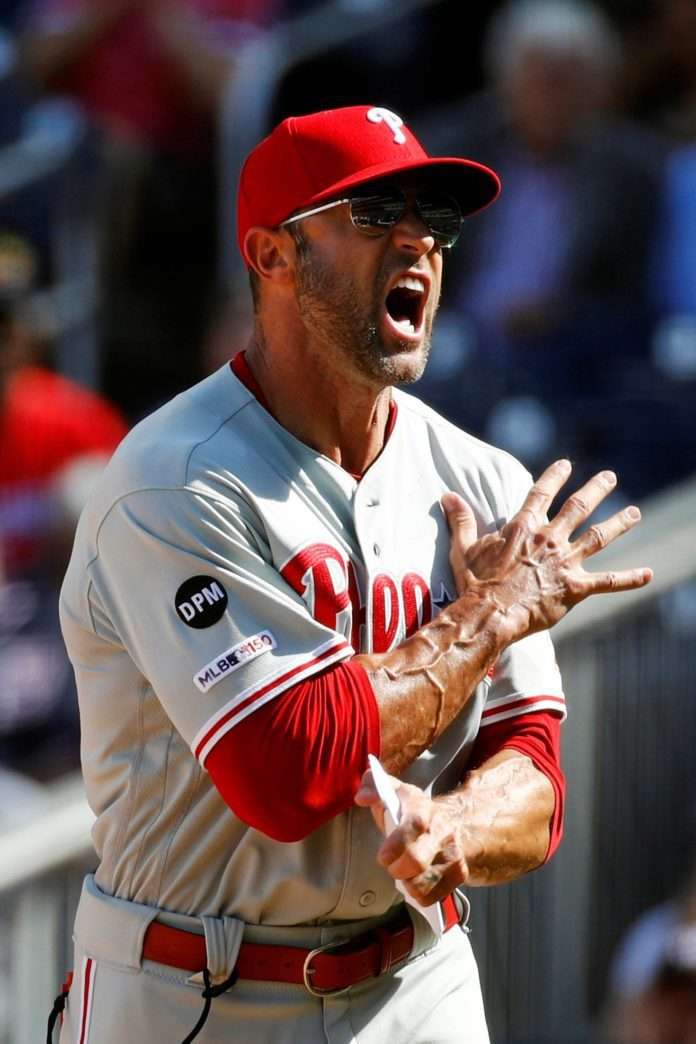 Are the Philadelphia Phillies faults Gabe Kapler’s blunder in 2019? Gabe Kapler should be fired by the Phillies management.

Could another manager do any better with the Phillies pitchers? I don’t think so, the talent is what it is. There’s only so much a manager can get out of his talent, if his talent just isn’t talented enough.

What should have been expected from the 2019 Philadelphia Phillies with the additions of Bryce Harper, J.T Realmuto, Jean Segura, and Andrew McCutchen? This team had the entire city ready to explode, looking to bring back those feelings and emotions of a decade ago.

Everyone in Philadelphia was hyped up, this team was going to the playoffs and beyond. As we now enter the middle of August, the Phillies are 2 games over .500, in 4th place behind the storming upstart team from Queens. What happened?

Most fans are blaming the Philadelphia Phillies Manager, Gabe Kapler. I would have gotten rid of him when the Carlos Santana story broke. Santana reportedly was breaking Televisions because guys were playing video games in the clubhouse during live baseball games.

What happened wasn’t as bad as the Red Sox getting drunk in the bullpen but it’s a similar problem in leadership and discipline. Most people want to get rid of Gabe Kapler, blaming him for the Phillies woes this season. Let’s venture into this.

When the season started I questioned the pitching. Many people seemed to want to ignore this. Back in April after Philly blew a couple leads late, I told people they should get used to this.

The hitting should and will be better in up-coming seasons. This individually isn’t the finest of any of the all-star caliber hitters the Phillies have on their roster.

As far as pitching goes, the Philly hurlers aren’t talented enough for the Phillies to get anywhere substantial in the postseason, even if they did make the playoffs. For everyone saying this is Kapler’s fault on the field, here are the Phillies hitting rankings out of the 15 National League teams.

If you didn’t know what team these stats came from, would you think this team was above .500? The pitching is not good, and the hitting although talented, hopefully will see better seasons moving forward.

You win with talent and the Phillies don’t have that talent right now, especially on the mound. I knew it coming in to the MLB season. I just hoped a couple starters would surprise. Wishful thinking.

These guys on Philly sportstalk need to blame someone because they hyped everyone up in the spring. They should blame themselves and apologize to the average fan that thinks these media people know anything at all.

Just because their face is on your television or their voice is on your radio doesn’t make them experts. They had everyone gassed, now they’re leading the hate parade within the city. They do this every year with all four teams.

Shame on you. Maybe you just don’t possess the knowledge about sports and it’s really not your fault.

Listening to the media, Erik Spoelstra needed to be fired and Pat Riley needed to step in and coach the Heat. Then Miami got LeBron and now he’s one of the best coaches in the NBA.

Ty Lue went from great to bum, in unison with LeBron and his departure. Maybe it’s not talent that wins! Maybe the Raptors will repeat this season, maybe it wasn’t Kawhi, maybe it was their 1st year head coach that won them an NBA title.

I’m not saying Kapler shouldn’t be replaced in Philadelphia, I think he should be fired.

I’m saying let him coach the Astros for a month and most people who don’t think he knows what he’s doing will shut up.