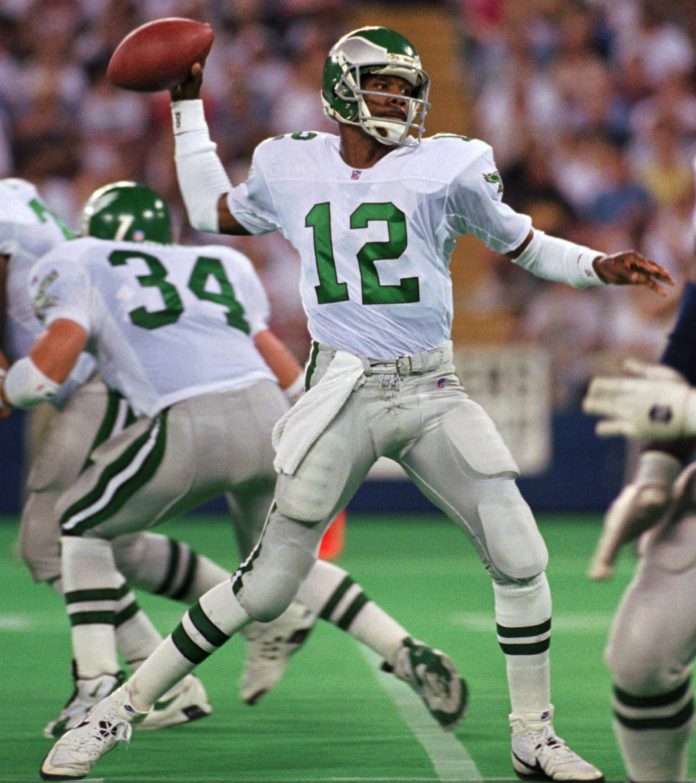 Is Randall Cunningham the best Eagles QB ever? Many think so but is he? did he do enough to cement this as a fact? The easy answer is no, anything like this is subjective but let’s dig a little deeper.

On Facebook there was a post placing each NFL franchise and who is that franchise’s best quarterback of all-time. Randall Cunningham was the choice for the Eagles. Many agreed with this, I wasn’t one of them

This is totally subjective to personal preferences. I grew up an Eagles fan just outside of Philadelphia, during the Buddy Ryan era. The first football game I remember watching was the Fog Bowl.

Mitchell & Ness Women's Randall Cunningham Kelly Green Philadelphia Eagles 1990 Legacy Replica Jersey Buy Now
We earn a commission if you make a purchase, at no additional cost to you.

Growing up with Randall

It was an exciting time watching Randall Cunningham and the Eagles as a youngster. I loved Randall like most young kids in the area. I assume a lot of the people stating that Cunningham is the best QB in Eagles history comes from people growing up at that time like myself.

With a little thought to Randall Cunningham being the best Eagles quarterback, It doesn’t take many words to make a compelling argument that he is not. If you’re going to list someone the best ever QB for a team, you need to take longevity, performance and most of all playoff success.

Mitchell & Ness Men's Brian Dawkins Black Philadelphia Eagles Legacy Replica Jersey
Buy Now
We earn a commission if you make a purchase, at no additional cost to you.

Did Cunningham have the best arm out of the Eagles quarterbacks? It’s an argument that can be made, even though I’d argue back with Sonny Jurgensen. Check out some NFL film footage and you may agree with me.

Autographed/Signed Michael Mike Vick Philadelphia Kelly Green Football Jersey Beckett BAS COA Buy Now
We earn a commission if you make a purchase, at no additional cost to you.

My last argument that Randall Cunningham is not the best QB in Eagles history is from 1993, when he was benched for the season and replaced by Rodney Peete. The only other QB to get benched in favor of Rodney Peete was Todd Marinovich at USC.

All the people that feel Cunningham is the best, I have one question, what other quarterback considered to be the best for his franchise was benched for an entire season in the middle of his prime?

Autographed/Signed Michael Mike Vick Philadelphia Kelly Green Football Jersey Beckett BAS COA Buy Now
We earn a commission if you make a purchase, at no additional cost to you.