This story is strictly my opinion on Kevin Durant’s signing with the Golden State Warriors and what it means for his legacy. Kevin Durant’s Journey to a title. 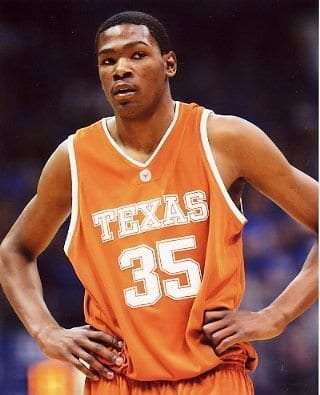 One Year at Texas

I remember watching Durant during his one year at Texas. What sticks out to me is the rapid improvement he made when conference play started in January, compared to the first few times I saw him in the 2006-2007 season. He just started dominating the Big12, when league play began.

In The 2007 season the Big12 was filled with quality veteran defensive teams. It was one of the deepest the conference has been in recent memory. Durant was dominant. Living up to the hype and being drafted 2nd overall by Seattle in the 2007 NBA draft. 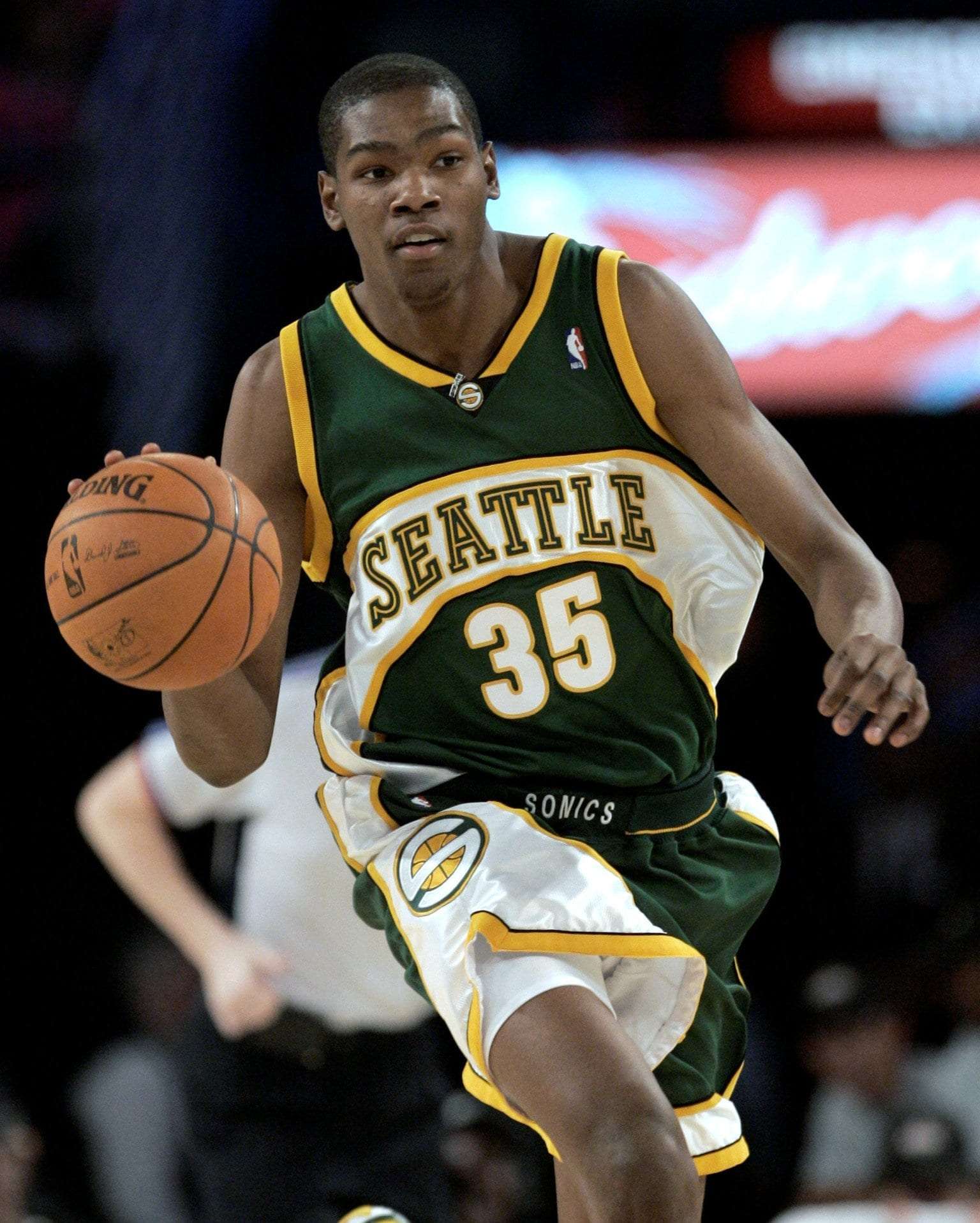 OKC: Rise of the Thunder

Seattle was relocated to Oklahoma City. Which is a story unto itself. That story can be told from multiple perspectives. I guess so can this one. This is just my perspective.

I assume everyone knows about K.D in OKC. He and fellow teammates Russell Westbrook and James Harden first made the playoffs in 2010. Facing off against the World champion and eventual back-to-back champion, the L.A Lakers. OKC played out of their minds taking the Lakers to 6 games before finally succumbing to the champs. It was as promising as a first playoff appearance gets.

OKC was an 8th seed in 2010 with raw ability, they were just learning to adjust to situations teams face in the NBA. For Westbrook and Durant, they were adjusting to stardom and fast becoming focal points that needed to be stopped by the opposition.ÃƒÆ’Ã¢â‚¬Å¡Ãƒâ€šÃ‚Â Chris Webber Golden State Warriors Mitchell & Ness Hardwood Classics 1993-94 Swingman Jersey - Royal
$129.99
Buy Now
We earn a commission if you make a purchase, at no additional cost to you. 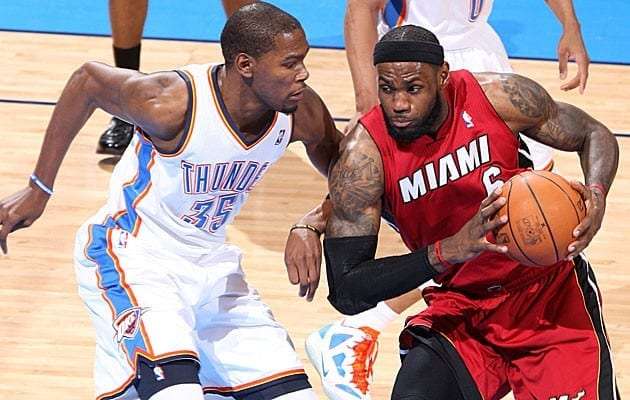 Kevin Durant was the unquestioned catalyst of this up-and-coming Thunder team. They reached their pinnacle in 2012. Winning the Western Conference and facing off against the Miami Heat in the NBA Finals.

In the finals, K.D would have his first NBA Finals encounter with contemporary superstar and media proclaimed fellow player of a generation LeBron James. When the dust settled on the 2012 NBA finals, the Miami Heat walked away champions. Giving LeBron James his first championship and Finals MVP award. It only took the Miami Heat five games to stop the storm that was the Thunder.

The 2012 Finals had some down-to-the-wire finishes, but in the end OKC was just too young. Everyone from fans to analysts thought like the Orlando Magic of the 1990s, that there time was on the horizon. Sooner rather than later. Pun intended. The fans could feel it. It could be felt through the television. The Thunder had next.

They had an electric and exciting team. It’s stars were 5 years away from their primes and they were already serious contenders. Everyone saw them as the successors to the aging Spurs. The Golden State Warriors were barely on anybody’s radar. The Thunder then traded James Harden to Houston to not have to pay him. 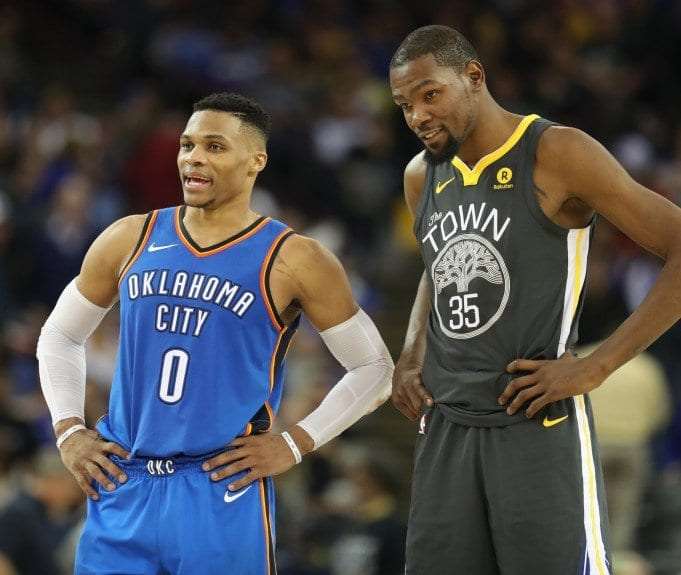 Not long after you start to hear Russell Westbrook and Kevin Durant couldn’t stand to be around one another. They denied it every chance they got, even after Kevin Durant left to join the Golden State Warriors.

They acted like best buds come game-time. Which to anyone watching came off as fake. It was forced and poorly acted like the last few years as teammates.

adidas Stephen Curry Golden State Warriors Gold Hardwood Classic Jersey
$135.00
Buy Now
We earn a commission if you make a purchase, at no additional cost to you.

OKC didn’t go back to the finals in 2013 or 2014. Losing in the west semis and west finals respectively.

Kevin Durant’s Journey to a title seemed to be going backwards by the end of 2014.

Durant only played 27 games in 2015 and OKC didn’t even make the playoffs.

In the 2016 playoffs, the Thunder and Kevin Durant were up 3 games to 1 against the defending champion and record-setting 73-win Golden State Warriors. They would lose the series in 7 games.

LeBron James, back with the Cavs in 2016, would defeat the Warriors the same way that Golden State defeated Kevin Durant and the Thunder, coming back from a 3-1 deficit.

In 2016 The Cavs became the only team ever to come back from down 3-1 in the finals to win a championship. LeBron James had returned to Cleveland and led the city to its first major sports championship since the Browns in 1964.

This was the player K.D had been compared to for the last half-a-decade. The player who defeated him in his only finals appearance. The media at this point was questioning if Durant would ever lead his team to a championship, while LeBron just won his third championship in five years. Each one delivering The King a Finals MVP award. 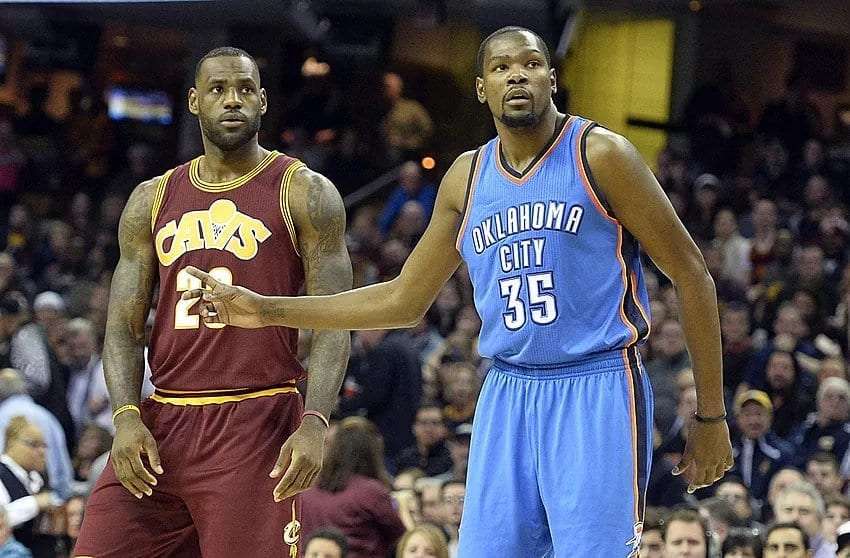 ÃƒÆ’Ã¢â‚¬Å¡Ãƒâ€šÃ‚Â LeBron James had just made history, coming back from a 3-1 deficit. In the previous round, Durant’s Thunder, against the same opponent had just squandered a 3-1 lead.

In the five seasons since Durant faced off against LeBron James in the 2012 Finals, he hadn’t returned to the Finals while the player he was most often compared to, LeBron, had won three NBA titles.

James had won in Cleveland, a city starving for a title. Then pretty much apologized for leaving in the first place. A Michael Jordan type-of- moment, the one LeBron needed to solidify his legacy to any doubters still speaking ill of him.

All that would be heard from there on in was CLEEEVVeLLLAAANND!

So what now for Kevin Durant? He was a free agent. No one would have blamed him for leaving OKC. Not outside of the Thunder fanbase. What he did, as everyone knows is sign with the same 73-win Warriors team that just beat him and his team.

It was in my opinion the dumbest and weakest move any star had ever made. It didn’t matter how many championships Kevin Durant won with the Golden State Warriors.

Everyone knew the Warriors would have won at least one more championship without Kevin Durant on their team. Now not only would they win but they couldn’t lose! Golden State Warriors New Era 2022 NBA Finals Side Patch 59FIFTY Fitted Hat - Black
43.99
Buy Now
We earn a commission if you make a purchase, at no additional cost to you.

The NBA pantheon of greatness

In the NBA, how you win and how much you win is vital to a player’s legacy. It’s what ranks and separates the stars of the past and gives insight to the present and future stars of the game on what is expected to achieve historic greatness.

It’s the NBA and it’s legendary past saying “How good are you young man, show me, I’m the NBA, let’s see how good you really are”. “Where will you stand, amongst the greatest to ever play when I say your career’s over.”

Michael Jordan was defeated in the conference finals by the three Eastern Conference champion and back-to-back NBA champion Bad Boy Pistons in 1989 & 1990. Detroit used the Jordan rules to beat Chicago.

The Jordan rules was a little bit more than just beating the crap out of Jordan like it was a WWE wrestling match. Just barely though. 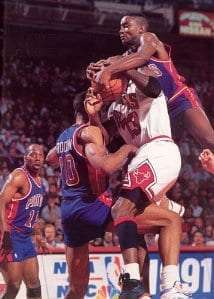 In both of those years, especially 1990 Jordan was hounded by the media. “No scoring champ can lead his team to a title.” “All he does is score.”

Jordan was down and frustrated because of this, so he worked his ass off. Mike was in the weight room and working on his game. His game and his body. He worked out while envisioning Chicago beating the Pistons.

Magic and Bird did the same in regards to each other when one would come up short. Whether it was Bird sitting in the dark for 3 weeks following the 1985 finals or Magic not much brighter after 1984, this is what legends did. They lived and breathed the game and didn’t take shortcuts.ÃƒÆ’Ã¢â‚¬Å¡Ãƒâ€šÃ‚Â 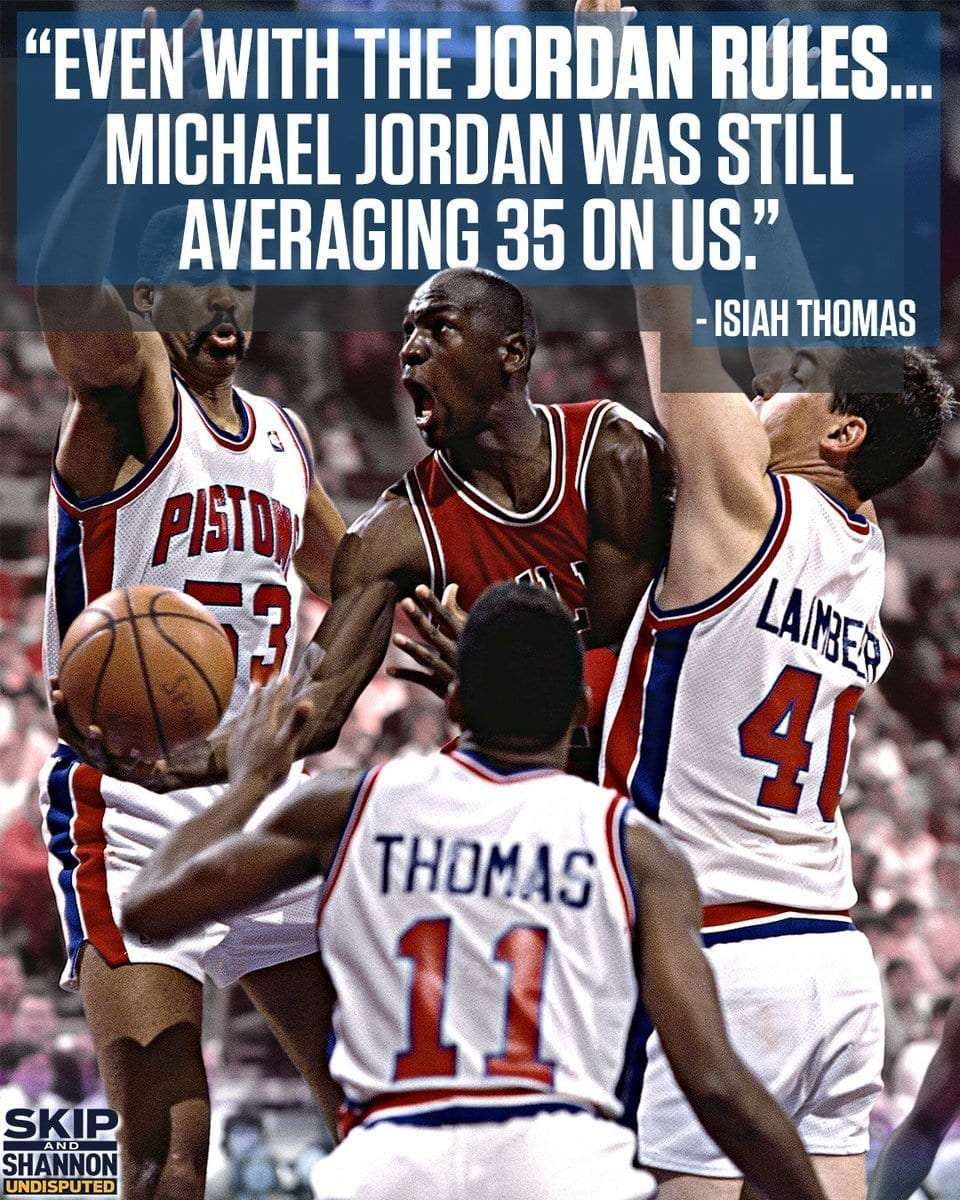 ÃƒÆ’Ã¢â‚¬Å¡Ãƒâ€šÃ‚Â After all of Jordan’s hard work, the Bulls swept the Pistons in 1991, en route to Chicago’s first championship. Does anyone think Jordan at any point thought about joining the Pistons? I mean if he was forced to, he probably would have quit instead.

What Kevin Durant did by joining the Warriors is like if Michael Jordan had joined the Pistons on 1990. It’s like turning on a video game, then going to the options menu and setting the difficulty to easy.

The history of the NBA will never recognize him in the same breath as the other greats in terms of being champions. As time goes on, respected pundits of the game will give him less and less credit. In my opinion, it will be deserved.

What he did should not be compared to LeBron going to Miami. When James left for Miami he joined a team that either didn’t make the playoffs or made a 1st round exit every year since their 2006 title.

I didn’t condone LeBron’s decision when it was happening. He did makeup for it though. That Cavs ring is going to go farther to cement his legacy than either one from Miami did.

Let’s get it straight, LeBron going to a maybe playoff team in a weaker conference has no comparison at all to what Kevin Durant did by joining the Golden State Warriors. 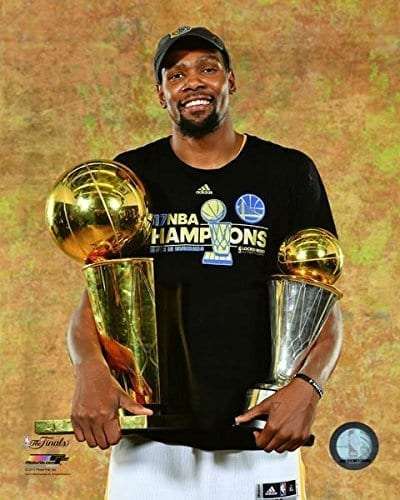 If I could tell one thing to Kevin Durant, it would be the saying “IF YOU CAN’T BEAT THEM, JOIN THEM” is not meant to be taken literally. It is meant figuratively. No matter how much he wins in Oakland, it will never count the same as the other great players and their rings. Their will be a figurative asterisk to whatever he accomplishes. If you ask me there should be an actual asterisk. 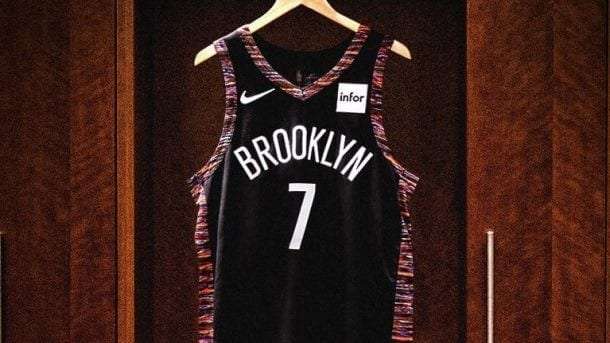 In the Final Destination movies you can’t cheat death. Mr. Durant same applies to the historical records of the NBA, and the players honored within it’s pantheon. It and they will not be cheated. You will not go down in the same breath as them.

Don’t care how many rings you acquire. let’s use Dirk as an example, his 2011 championship will mean more than any and all of your rings in Golden State combined.

What you did barely means more than if you bought a ring off a retired player like your head coach or Robert Horry. It’s a shame too because your talent is that of one of the best to ever play the game but your integrity is crap.