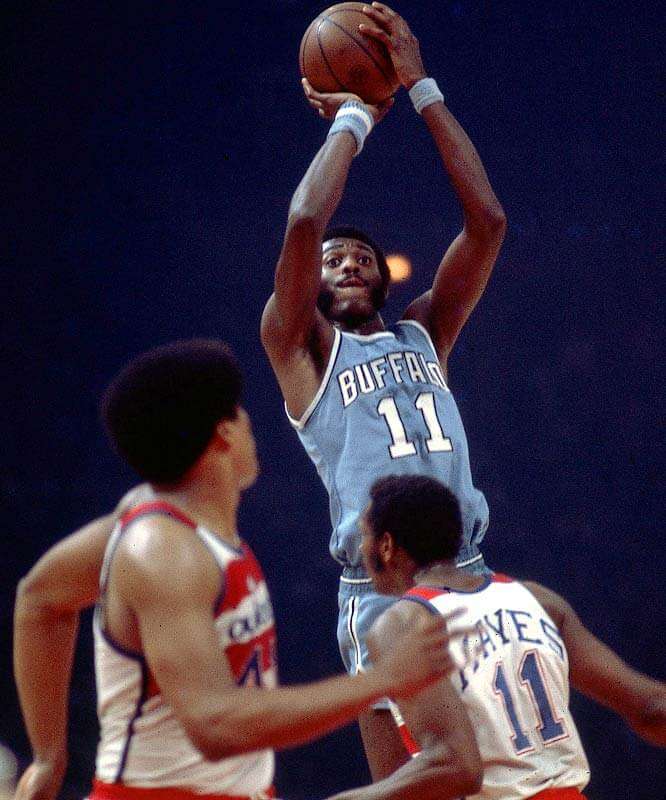 Bob Mcadoo stats, highlights and the legend covers one of the most underrated MVP’s in NBA history. A three-time scoring champ and later an NBA champion, from Vincennes, to North Carolina, Bob Mcadoo’s stats and game were legendary

Bob McAdoo: the stats, the highlights, and the legend.

McAdoo was the original stretch big man in the NBA, four decades before anyone ever heard of the term. If you look at Bob McAdoo and his stats you can see what his impact was on the NBA.

You have to watch him on tape to truly understand who he was and what he could do on a basketball court.

When McAdoo left the University of North Carolina at Chapel Hill, he’d garnered 2nd-team All-American honors and led the Tar Heels to the Final Four. North Carolina head coach, Dean Smith didn’t bring in transfers, McAdoo was the exception to that rule.

He made an immediate impact on the ACC and was the ACC tournament MVP in Greensboro, North Carolina. Only the conference champion was invited to participate in the NCAA tournament back then. McAdoo averaged 19.5 ppg-10.1 reb in his one season at UNC. Bob McAdoo would see his stats increase once he became a professional.

He was the 2nd pick in the 1972 NBA draft. The UNC big man was picked 2nd because he couldn’t come to a contract agreement with Portland, the team that held the 1st pick. It was later discovered that he was the first pick in the ABA too.

Finishing 2nd in MVP voting in both 1974 and 1976. McAdoo was a two-time NBA champion and in 2000 he was inducted into the Naismith memorial basketball hall-of-fame.

He played center and power forward during his career. Much of his offense came off of jump shots. He was a complete offensive weapon that hasn’t been duplicated by anyone else since. Respect of his peers

He was drafted by the Buffalo Braves, the franchise now known as the L.A Clippers. His impact on the league was immediate. He was named Rookie-of-the-Year and every player on every team knew he was a superstar in the making.

The ex-Tar Heels superstar was a new kind of weapon that hadn’t been seen in the NBA before, a center who was shooting as far back as today’s three point line.

There wouldn’t be a three point line for a few more seasons but it didn’t matter to “Can-Doo” McAdoo. He could spot-up, take the defender off the dribble or he could use his dribble to find his shot.

Just imagine what shooting guards do and that’s what McAdoo was like with the ball. It was a nightmare for opposing centers and power forwards to check him.

Dr. Jack Ramsey said of him “Bob McAdoo had the full package, an offensive weapon that I don’t think has ever been equaled in the game”. Magic Johnson called him “unstoppable”.

Today defenders are used to big men stretching the floor. In the 1970’s teams didn’t know what to do against him. They would try things like switching the power forward on him. Usually this wouldn’t work as he would take them into the paint with his turn around jumper. He is the original stretch big, shooting all over the floor.

The hall-of-famer wasn’t just a shooter. He was a shot creator off the dribble too, similar to Dirk Nowitzki. He was also a better rebounder and low post scorer than a player like Dirk was. I’m not comparing the two, just stating facts.

He broke the North Carolina high school record for the high jump, an example of his agility and athleticism.

In 1974, McAdoo won his first of three straight scoring titles. His 30.6 points-per-game is an impressive stat in itself but he also led the NBA in field goal percentage in 1974. Shaquille O’Neal did this in 2000, as did Wilt Chamberlain.

McAdoo was the only one out of the three that did this with a majority of his points coming from the perimeter. Round this off with 15.1 rebounds-per-game, 3.3 blocks and over a steal per game too.

Bob McAdoo had a great NBA career that spanned from NBA MVP to important role player off the bench for a championship team. He traveled around the league, playing for a total of eight NBA teams.

McAdoo played and continued his scoring onslaught in 1977 with the New York Knicks. He then had a cup of coffee with the Boston Celtics, Detroit Pistons, and New Jersey Nets.

On Christmas Eve 1981, he was traded from the Nets to the Los Angeles Lakers for a 2nd round pick. The Lakers were hoping to tap into some of his greatness from 5 years earlier.

Still only 30-years-old, he knew he still had some good seasons ahead of him as a basketball player.

Coming off the bench for the Lakers, McAdoo wouldn’t be an NBA superstar anymore.

He would have to be a role player on one of the greatest NBA teams of all-time, the showtime Lakers.

In his four seasons with Los Angeles, he played over 20 minutes-per-game and played in the NBA Finals every single one of those seasons.

The NBA veteran was a major contributor on two NBA championship teams in 1982 and 1985.

After L.A, he went on to play with the Philadelphia 76ers, this was his last season as a basketball player in the NBA.

He would play seven more seasons in Italy before retiring after the 1993 season, he was 41-years-old.

He became an assistant coach under Pat Riley with New York in 1995. Riley was the Lakers head coach that brought McAdoo to Los Angeles. When Riley became the Miami Heat’s head coach, McAdoo went with him again.

After Riley moved from coaching into the front office, McAdoo remained an assistant coach for the Miami Heat, winning three championships.

McAdoo wasn’t at the top of his game as long as some other NBA legends were. This has somewhat left him out of the basketball lexicon of younger fans. He was still a difference maker on one of the greatest teams in NBA history, the Showtime Lakers.

With everything being considered he should be remembered as the archetype of the stretch big man. The fact that he was doing it 35 years before anyone else has hurt him in this regard.

I hope that this article on Bob McAdoo, the archetypical NBA stretch big man, sheds light on the player to a younger fanbase unaware of what he could do on a basketball court. If you love basketball, watch a game of his when he was with the Buffalo Braves. If you want to see an exciting performance, watch the 1975 eastern conference semi-finals, game 4, Buffalo Braves vs. Washington Bullets.

McAdoo was part of the inaugural class of the NJCAA hall-of-fame, being inducted on June 24, 2021. The NJCAA stands for the National Junior College Athletic Association. These are two year universities.

He starred at Vincennes University in Indiana. Bob was honored by the induction into the HOF.