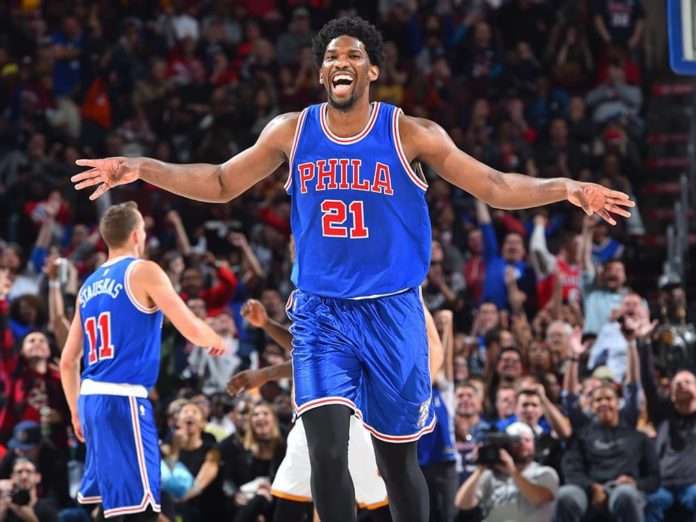 Will Joel Embiid’s injuries define his Sixers career? Will he lead the Philadelphia 76ers to a championship?

If Joel Embiid overcomes his injuries, I believe championship rings are inevitable but it’s a big if and here’s why.

Can Joel Embiid stay healthy and av oid injury for The Sixers? Let’s look at the great 7’0 big men from the past with health issues.

Will Joel Embiid ever live up to his potential or will injury end his dominance?  Is he the next Shaq, the next Olajuwon or is he the next Greg Oden, Sam Bowie, or Andrew Bynum?

Just to let everyone reading this know, I am a Philly fan and I love my Sixers. During the 2014 draft, when the 76ers management drafted Joel with the 3rd pick, I was feeling despondent. No 7’0 big man has ever suffered through serious injuries to the knee, foot, or back and came back and REMAINED healthy.

The one’s who finally got healthy, it was after their athleticism had left them and they were only a shell of the player who previously held all the promise of an NBA superstar.

Players like Sam Bowie, who if you ever saw him in college or during his rookie season, you saw a raw and athletic athlete, an imposing giant, jumping out of the gym. Even after a serious tibia injury sidelined him for two full seasons at Kentucky.

During Bowie’s rookie season in 1984-85, Sam played 76 games plus another 9 playoff games. The next season as he was going up for a board he broke his left tibia again.

When he came back the following season, five games in, he went up for a shot and when he came down he had fractured his right tibia this time. Once his athleticism was depleted he had a few pretty productive seasons in the early 90’s. Mainly as a backup.

Bill Walton was one of the greatest, most talented centers of all-time. As a pro he was almost never healthy. He’d play half a season, then miss the next season entirely. Walton led the Portland Trail Blazers to an NBA title in 1977, then in 1978, he played 58 games.

The next four seasons Bill only played 14 total games. All 14 of these games came in the 1979-80 season. Three out of four seasons, he didn’t play a single game.

The reason I was despondent of Philly drafting Embiid was because a 7’0 who has had serious injuries to the foot, back, or knee has never recovered to stay healthy for any serious amount of time. Joel Embiid had all these injuries before even entering the NBA.

Guys like Brad Daugherty and Yao Ming had multiple all-star seasons before their injuries started. Ralph Sampson saw four straight all-star appearances. Sampson played three full seasons but he only played 43 games the last year he was selected an all-star in 1987. He was never healthy again.

Andrew Bynum faced injury year-after-year until his career ended in his mid twenties. Greg Oden was drafted ahead of Kevin Durant but basically never got out of the starting gate. Arvydas Sabonis went through similar trials before coming to the league.

So back to the beginning of the story. No one, not ever, not even once, ever has returned and remained unbroken. It’s my opinion it isn’t anything that’s wrong with the guys I’ve mentioned. I don’t think a 7 footer’s body, especially the athletic ones, are equipped to put that kind of stress on their bodies through the NBA’s grind.

The ones who do stay healthy, they are the anomaly. Joel Embiid probably won’t be any different. Maybe he can pull off a Walton before it all goes to hell but that’s based on time, circumstance and just stupid luck.

Time, luck, and a Ben Simmons Jump shot. Why would he stay healthy? His injuries came faster than anyone else that I’ve mentioned.

Embiid played 28 games for Kansas before cracks began to appear physically, hinting at a body that would soon be broken. That’s about a quarter of an NBA season.

Now with injury rumors and concerns entering the 2019 NBA playoffs, how long will it take Philadelphia to recognize that their process is just leading to another M. Night shymalon sequel. Set in Philadelphia, with Embiid reprising the role of Mister Glass.

When this happens no one should blame him, he was injured coming into the NBA and history shows what it shows. Blame the management team who was there when he was drafted for not knowing the history of the big man.

With all the time that the Sixers management gave Joel Embiid to get healthy, will that be the difference for the Sixers? Will mentions of Joel Embiid make Sixers fans think of MVP’s or injuries in ten years?

All the rest becoming the difference that breaks the mold or will it be Joel Embiid’s body breaking? Time will tell the Sixers story with him, but if it follows the outline set before him, Embiid and the fans that love him will be broken inside.

In 2020-21, Joel Embiid is a top MVP candidate in the NBA. Along with Tobias Harris and Ben Simmons, he has helped lead the Sixers to the top seed in the Eastern Conference during the regular season.

In March 2021, Joel Embiid injuries resurfaced with a bone bruise in his left knee. In the first round of the playoff series vs. the Washington Wizards, he suffered a lateral meniscus tear in his right knee. The team says that surgery will not be required.

The MVP candidate has underwent surgery for meniscus tears in the past. In 2017, he had surgery on his left knee. Some small meniscus tears can heal without surgery. Will he be back from this torn meniscus in 2021?

Embiid suffered through knee soreness in the past but he has to be careful. He doesn’t want to be put on a stretcher and carried into the locker room with career threatening injuries. This happens when players play with injuries, they are more susceptible to serious breaks, just look at the 2019 Golden State Warriors.

The Sixers were able to close out the Wizards without Joel but now move on to face the Atlanta Hawks in the eastern conference semi-finals. Joel Embiid’s injury has him listed as day-to-day.

Philadelphia has a future hall-of-famer in Dwight Howard as its backup center. No one knows what to expect from this Joel Embiid injury moving forward.

He has had multiple knee injuries in the past. Many of these required surgery. Hopefully Sixers fans will have their MVP candidate moving forward in the next round of the NBA playoffs.

If not, no one should be mad or say ignorant things about Joel Embiid because he came into the league injured and as this article points out once a foot, back, or knee injury occurs in a 7 footer, he is never healthy again.

President of Basketball Operations Daryl Morey said the star center “has a plan with our medical staff”, and Morey signed Embiid to a $196 million Supermax extension with The Sixers.